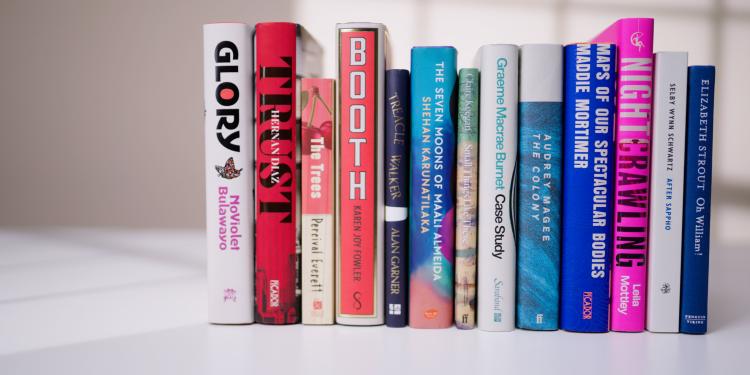 ‘Courageous’, ‘a revelation’, ‘gin fizz and blancmange all round’ – the Booker Prize 2022 longlist has been greeted with delight, curiosity and excitement by the media, publishers, influencers and even politicians

Taking readers from California to Sri Lanka via a remote Irish island, from 1960s London to 1930s Cheshire, as well as to a nation governed by animals and even inside a woman’s cancer-stricken body, this year’s Booker Prize longlist is bursting with variety, some unexpected gems and, of course, 13 absorbing reads.

But don’t just take it from us; critics, authors, fans and even politicians have greeted the 2022 longlist, which was announced on July 26, with delight, curiosity and excitement.

Jake Kerridge, writing in the Telegraph, called the list of books ‘genre-sprawling’ and described it as ‘courageous and the best possible response to the recent spate of prize closures’. He also deemed it ‘a longlist that foregrounds the offbeat, the experimental and the unsung’.

Sana Goyal, deputy editor of Wasafiri, the magazine for international contemporary writing, said on Twitter that ‘This is possibly the most exciting and forward-looking Booker Prize longlist I’ve seen in years. It seems like the judges have looked everywhere – far and wide, to the old and new, big and small – and beyond the spaces on prize lists occupied by the usual suspects.’

Several American authors feature on the longlist, and the New York Times said the ‘nominated novels are wildly diverse in subject matter’, while the Los Angeles Times linked the announcement of the Booker Prize longlist to the release of Barack Obama’s annual summer reading list, noting that the Booker longlist ‘generates similar excitement’ to the former president’s recommended reads. Vulture said the authors on the list ‘span ages and backgrounds, working within many genres to shape their novels’ imagined worlds’.

Many in the media picked up on the fact that this year’s longlist contains the youngest (Leila Mottley for Nightcrawling) and oldest (Alan Garner for Treacle Walker) authors ever to be nominated. While it is both authors’ first appearance on the Booker longlist, four of the 13 authors have been longlisted or shortlisted before: NoViolet Bulawayo, who is longlisted for Glory, Karen Joy Fowler for her sprawling historical novel Booth, Scottish author Graeme Macrae Burnet for Case Study, and Elizabeth Strout for Oh William!.

The list also includes debut authors Maddie Mortimer, for Maps of Our Spectacular Bodies, and Selby Wynn Schwartz, for After Sappho. Two Irish novels made the list; Claire Keegan’s Small Things Like These (the shortest book) and Audrey Magee’s The Colony. The longlist is completed by Percival Everett’s The Trees, Hernan Diaz’s Trust and Shehan Karunatilaka’s The Seven Moons of Maali Almeida.

I have no notes. This is possibly the most exciting and forward-looking Booker Prize longlist I’ve seen in years. It seems like the judges have looked everywhere—far and wide, to the old and new, big and small—and beyond the spaces on prize lists occupied by the usual suspects 👏🏽 https://t.co/1NN7ywNzvT

📚Many congrats to the v talented @GMacraeBurnet on his second @TheBookerPrizes nomination.
Overall this is an interesting list. I’ve read three (Booth; Small Things Like These & Case Study - all excellent). After Sappho is next on my tbr pile & hope to read some of others too https://t.co/jtdhPKuq5A

The Guardian’s Justine Jordan said it was a ‘thoughtfully curated list which spotlights small presses’. Jordan was particularly enthused by the inclusion of Garner, saying it was ‘recognition at last for an under-sung national treasure too often pigeonholed as “just” a children’s writer’. In the Times, Robbie Miller said the list was ‘unexpected’, and admitted that the Times and Sunday Times’ literary teams only predicted two of the 13 books that made the list. In the Independent, Eva Waite-Taylor called the list ‘an exciting one – full of firsts, independent publishers and established authors’.

Eight of the longlisted books come from independently-owned publishers, including Graeme Macrae Burnet’s Case Study, published by Saraband. On Twitter, Saraband stated that it was ‘speechless and so very excited’ about the longlisting and that it was ‘great to see our fellow indie presses listed’, while Goyal said she was ‘pleased to see indie presses exactly where they should be: at the front and centre of “establishment” prize lists’.

Burnet, who is longlisted for the second time, was applauded by fellow Scots, with Ian Rankin congratulating his ‘mucker’, and Scotland’s first minister Nicola Sturgeon tweeting about the inclusion of the ‘v talented’ author. A well-known book enthusiast – she regularly talks about the books she’s been reading – Sturgeon also gave her verdict on the whole list, saying on Twitter: ‘Overall this is an interesting list. I’ve read three (Booth; Small Things Like These & Case Study - all excellent). After Sappho is next on my tbr pile & hope to read some of others too.’

Authors enthusiastic about the list included playwright and novelist Petina Gappah, who tweeted that it was ‘absolutely brilliant to see NoViolet Bulawayo, Elizabeth Strout, Karen Joy Fowler and my dear friend in the short story Claire Keegan join this year’s world-spanning Booker Prize long list’. She added that she couldn’t ‘wait to discover all the other authors’, while crime novelist Val McDermid said it was a ‘fascinating list’. Tor Udall said it felt ‘like a really fresh, delightful list’, and said she had already ordered a couple of the books, while Lorraine Candy said it was ‘an unexpected list but some brilliant titles here for your summer reading’. 2019’s Booker Prize winner Bernardine Evaristo tweeted that it was ‘always interesting to see the list every year’, and confessed she had only read one of the books on this year’s longlist.

Of course, the longlisted authors themselves were delighted with their own inclusion, and offered their congratulations to their fellow longlistees. Burnet said he was ‘unfeasibly thrilled’ to find Case Study on the longlist, and raised a toast to the other authors (‘Gin fizz and blancmange all round’), while Mottley said on Twitter that she was ‘unbelievably grateful to be among these incredible authors’.

The most succinct reaction probably came from Mortimer, who simply tweeted: ‘holy f—’.

The Southbank Centre’s head of literature and spoken word, Ted Hodgkinson, who also chaired the International Booker Prize in 2020, tweeted that it was a ‘spectacular longlist, with a host of exciting debuts alongside so many brilliant and beloved authors from far and wide’.

As well as the books themselves, the judges – cultural historian and writer Neil MacGregor, academic and broadcaster Shahidha Bari, historian Helen Castor, author and critic M John Harrison, and novelist and poet Alain Mabanckou – also came in for much praise. Hodgkinson tweeted, ‘hats off to the judges on their selections’, while Kerridge in the Telegraph said the judges had ‘the confidence to tell the reading public what they think is worth taking a punt on rather than trying to pique its interest by including a scattering of old favourites’.

It wasn’t just traditional media, journalists and authors taking part in the conversation around the longlist.

On TikTok, a number of BookTokkers posted reaction videos, including BooksNPunks, who posted a live reaction from a wedding and was surprised by the longlist, and WellDoneBooks, who said, ‘If you like reading, then you should definitely be paying attention to the Booker Prize’. BooksAreBrainFood had made a prediction video, and celebrated picking Maps of Our Spectacular Bodies as being on the list.

GK Reads said in a reaction video that it was an ‘interesting list’ and she was ‘very, very excited’. Bob the Bookerer said. ‘There are some really interesting surprises on this [list].’

On Instagram, marthaluvsbooks created a reel of the longlist, and said it was ‘definitely one of the more interesting Booker Prize longlists I’ve seen’, while Bernie Lombardi, who predicted four of the 13 books (‘not amazing but not bad either’), remarked that ‘it looks like they represent diverse writing styles and approaches to narrative, which I love’.

The longlist also attracted those previously sceptical about literary fiction. Katie Ellis-Brown, deputy publishing director at Harvill Secker, said on Twitter: ‘As someone who never reads “literary” fiction and in fact, just doesn’t get it or enjoy it (sorry not sorry), I am totally into the Booker longlist and well eager on quite a few of the books on there. What a revelation!’

Enthusiasm about the longlist has been borne out in sales figures. Burnet’s Case Study saw the biggest leap in sales, increasing by a whopping 6,400%, according to trade magazine The Bookseller. Garner’s Treacle Walker saw a sales increase of 2,389%, while Booth’s sales rose 2,550% week on week.

Other titles also saw a sales lift, including Elizabeth Strout’s Oh William!, which is the bestselling book so far on the longlist; its sales jumped 150% week on week.

The Booker Prize shortlist will be announced on September 6, and the winner on October 17.

Read the 2022 longlist: an extract from Glory by NoViolet Bulawayo

Graeme Macrae Burnet interview: 'The most important research I did for Case Study was ploughing through women's magazines from the 60s'

Read the 2022 longlist: an extract from The Trees by Percival Everett

Read the 2022 longlist: an extract from Small Things Like These by Claire Keegan

Read the 2022 longlist: an extract from Treacle Walker by Alan Garner

Read the 2022 longlist: an extract from Oh William! By Elizabeth Strout

Read the 2022 longlist: an extract from Nightcrawling by Leila Mottley