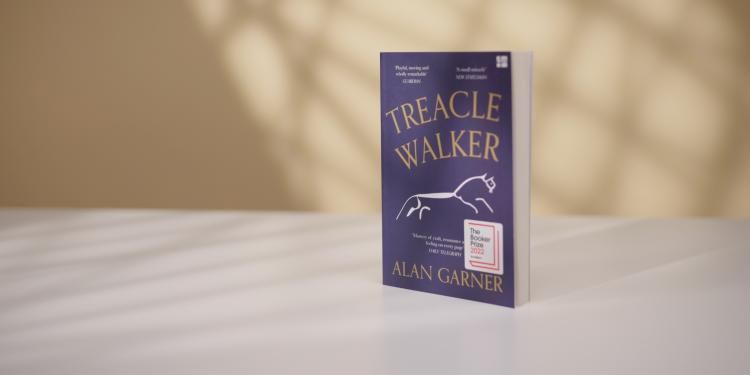 This latest fiction from a remarkable and enduring talent brilliantly illuminates an introspective young mind trying to make sense of the world around him. Read the first chapter here

Joe Coppock squints at the world with his lazy eye. He reads his comics, collects birds’ eggs and treasures his marbles, particularly his prized dobbers. When Treacle Walker appears off the moor one day - a wanderer, a healer - an unlikely friendship is forged and the young boy is introduced to a world he could never have imagined.

In this playful, moving and evocative fable, set once again in his beloved Cheshire, the masterly Alan Garner delivers both a stunning fusion of myth and folklore and a profound exploration of the fluidity of time.

Joe looked up from his comic and lifted his eye patch. Noony rattled past the house and the smoke from her engine blew across the yard. It was midday. The sky shone.

Joe pulled the patch down, got off his mattress on the top of the chimney cupboard and stood at the big window.

The last of Noony’s smoke curled through the valley and along the brook. He could see no one in Barn Croft or Pool Field or Big Meadow or on the track between the top and bottom gates; and trees hid the way up from there to the heath. He went back to bed.

The voice was below the window. He climbed down again.

There was a white pony in the yard. It was harnessed to a cart, a flat cart, with a wooden chest on it. A man was sitting at a front corner of the cart, holding the reins. His face was creased. He wore a long coat and a floppy high-crowned hat, with hair straggling beneath, and a leather bag was slung from his shoulder across his hip.

‘Ragbone! Ragbone! Any rags! Pots for rags! Donkey stone!’ He looked up at Joe. Joe opened the window. Even from there he saw the eyes. They were green violet.

‘Wait on,’ said Joe. ‘I’m coming.’ He rummaged in the cupboard and found an old pair of pyjamas. He ran downstairs to his museum and raised the glass lid. There was his collection of birds’ eggs and a lamb’s shoulder blade he had picked from a mole hill by the railway embankment. He took the shoulder blade, opened the door and went into the yard.

‘Come aboard, buccaneer,’ said the man.

Joe put his foot on a wheel spoke and climbed onto the cart. The man made room for him at the corner, and Joe sat down. He turned his face away.

‘What is wrong?’ said the man.

‘Not I, Joseph Coppock,’ said the man. ‘You smell that I stink. Let words be nice.’

Joe jumped from the cart.

Joe climbed back, but sat further along the cart.

‘What have you brought to market?’ The man took the pyjamas. ‘These are yours? Your own? You have worn them?’

The man put the pyjamas to his face and sniffed.

‘They’ve not been washed,’ said Joe.

‘I found this down the banking, near the brook. It’s a lamb.’

‘“As Dick’s hatband”, as they used to say. Open the chest. And choose.’

Joe got up and went to the chest. He lifted the lid.

‘More than jamas and bones.’

Joe took out every piece and laid them on the cart.

‘That is the least,’ said the man.

Joe held a round jar no bigger than his hand.

The jar was white, glazed, and chipped. Under the rim was painted in blue: ‘Poor Mans Friend’, and beneath, ‘price 1/1½’. On the other side was: ‘Prepared only by Beach & Barnicott, SUCCESSORS TO THE LATE Dr. Roberts, Bridport.’

‘As some would reckon. Now you shall have donkey stone.’

The man put everything back in the chest and closed the lid. There was an oval brass plate in the middle of the lid, and on it Joe saw a name engraved in flowing letters.

‘What is wrong?’ said the man.

‘At this time all is yours. You have chosen. Next, you shall have this.’

He put the stone into Joe’s hand. One side was plain; on the other was cut the outline of a horse, legs and tail outstretched, head forward, long.

The man opened his bag and took something out. ‘Here.’ It was a stone, rough and grey, the size and shape of a bar of soap.

He put the stone into Joe’s hand. One side was plain; on the other was cut the outline of a horse, legs and tail outstretched, head forward, long.

‘We are equal. The trade is done.’

‘And what am I supposed to do with this effort?’ said Joe.

‘You would be swift to outrun that one,’ said the man. ‘The craven nidget who flees the dark and will not come back till morning.’

‘Then I shall bid you good day; but have shade here under your pear. Heat and old meat don’t marry. And the leaves of pear are cold, its virtues earthy.’

A wind threw the door onto him, shoving him against the stack. And night spilled in. Snow stung his face. He forced the door against the wind and the latch clanged shut.

He went into the house. The man followed, but paused and looked at the step as he crossed the threshold.

The house was three rooms parted by timber-framed walls and joined by open doorways. A round iron fire basket was in the base of the chimney, which was a room of itself, made of the same timbers, walked through from two opposite sides.

Joe and the man went into the chimney and sat on the oak sill of the base, facing each other across cold ashes. Joe put the pot and the stone next to him on the sill. The man took his bag from his shoulder and set it on the floor.

‘Why the patch, buccaneer?’ said the man.

‘I’ve got Lazy Eye,’ said Joe. ‘I must wear the patch over the good one so the other will catch up. But it’s not doing owt. It gives me headaches. And I can’t see proper.’

The man sat and did not speak. Everything about him was poor. His shoes were hard leather and too big and were fastened with a strap, and there were open splits across the tops, as if they had been slashed. He wore no socks.

Joe shifted to the side, and back. ‘Your face,’ he said. ‘One road, it’s old. The other, it’s not. Straight, it’s all sorts. Same as them knacky postcards change when you look. It’s this blooming eye.’

‘Wellaway.’ The man gazed into the tapering stack above.

‘Can you not talk sense? What’s your name?’

Outside, the iron ring handle of the door banged on the wood three slow times, sounding through the house.

Joe went to the small window by the door and looked. He saw no one. Only the pony under the tree; and the bleach of heat.

‘There’s nobody there,’ he said.

‘Then no body wishes to come in,’ said the man.

Joe looked again. The pony. The tree. The heat.

He lifted the latch.

A wind threw the door onto him, shoving him against the stack. And night spilled in. Snow stung his face. He forced the door against the wind and the latch clanged shut. He clung to the chimney post. But night was in the room, a sheet of darkness, flapping from wall to wall. It changed shape, swirling, flowing. It dropped to the ground and ruckled over the floor bricks; then up to the joists and beams of the ceiling; hung, fell, humped. It shrieked, reared against the chimney opening, but did not enter. It surged through the house by cracks and gaps in the timbers, out under the eaves. There was a whispering, silence; and on the floor snow melted to tears.

Treacle Walker by Alan Garner is published by 4th Estate, £10

As his latest book is shortlisted for the Booker Prize 2022, we spoke to Alan Garner about the eight-year process behind it, how he went from reading comics to becoming a classicist… and the real Treacle Walker