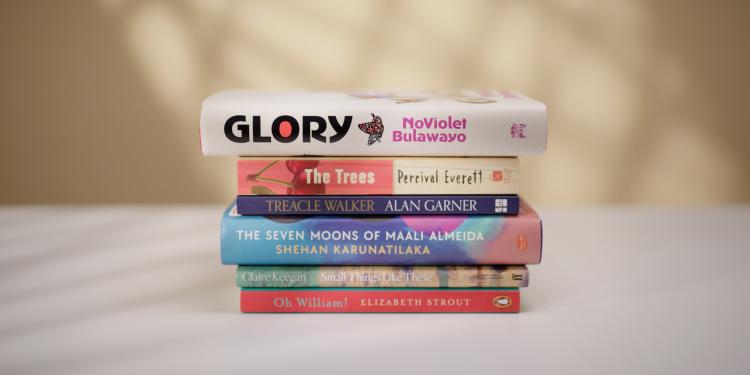 Announced on 6 September, the list generated almost universally positive press coverage in over 15 countries, from Finland to South Korea. Here is a snapshot of what everyone is saying.

What everyone is saying about… short books

Several commentators picked up on the fact that the shortlist features two of the shortest books ever to be nominated: Treacle Walker by Alan Garner and Small Things Like These by Claire Keegan - with Oh William! by Elizabeth Strout only slightly longer. Glory by NoViolet Bulawayo is the only book on the shortlist to weigh in at over 400 pages.

In the i, Max Liu wrote, ‘Let nobody say that Treacle Walker, Oh William! and Small Things Like These are too short to win. They all compress a vast range of experience, ideas and emotion into their pages.’ He added: ‘One of the great things about short novels is that rereading them is no chore and you will find more in all of these books the second time.’

In the Telegraph, Anita Singh observed that ‘brevity appears to be back in literary fashion, after shortlists dominated by doorstep novels’. Singh’s colleague, Claire Allfree, commented that ‘Nearly all the six books chosen from a lively and surprising 13-strong longlist defy any accusation of the Booker as favouring novels that are elitist or a slog’.

Perhaps the authors themselves agree. In the Sunday Times, Liam Kelly interviewed Alan Garner, who noted that ‘the ways of storytelling are getting shorter’.

In the Telegraph, Singh quoted from Claire Keegan’s interview with the Booker Prize website, in which the Irish author said: ‘Elegance, to me, is writing just enough’.

In the Times, Robbie Millen felt that the brevity of several of the six books was ‘another point in the shortlist’s favour… Less is more’. He went on to nickname the 2022 selection ‘the Ronnie Corbett shortlist: short and funny’.

What everyone is saying about… funny books

Indeed, several commentators were delighted to see so much humour in the shortlist as a whole. Millen declared the 2022 selection to be ‘the funniest shortlist in years’. Three of the novels, he said, ‘made me laugh out loud on several occasions. That doesn’t mean they are lightweight’.

In the New York Times, Alexandra Alter expressed a similar view, noting that ‘Several of the novels recognized by judges this year deploy humour… to tackle painful chapters of history.’ Alter quoted the Chair of the Booker Prize 2022 judges, Neil MacGregor, who said, ‘One of the great powers of language is to make you laugh, even in the middle of terrible things’.

Beyond the humour, commentators found depth and power in the shortlist as a whole. In the i, Max Liu wrote about his experience of reading all six novels on the list, and said that they ‘lifted me out of the noise of contemporary life and encouraged me to think about what truly drives people and defines societies.’

Writing in the Guardian, Booker Prize 2022 judge Shahidha Bari praised the humour in another of the shortlisted books. ‘If you’re looking for the wittiest book of the list,’ she said, ‘it might be The Trees by Percival Everett: a morbidly funny and semi-supernatural thriller in the southern gothic style.’

She added that ‘every book on the 2022 shortlist is a serious contender for the prize. Short of coin-tossing, arm-wrestling and plucking a name from a hat in a blind panic, I’ve no idea how we’ll pick a winning book from this spectacular final six.’

What everyone is saying about… being shortlisted

Soon after the shortlist announcement, Charlotte Cripps in the Independent interviewed several authors on how it feels to be nominated, including NoViolet Bulawayo. Asked how it felt to be shortlisted for a second time, she said: ‘I celebrated the news with my amazing team, including my incredible editors, called one of my sisters, who said, “well, I guess I have to read the book.” I must say I love my family in times like these.’

On Twitter, Elizabeth Strout praised not only her fellow shortlisted authors, but the longlisted writers too. ‘Congratulations to the other short-listed AND long-listed authors. Thank you to all our readers, too,’ she wrote. ‘It’s an honor to be part of this community of readers and writers.’

What everyone is saying… on social media

Manasi Subramaniam, associate publisher at Penguin Random House India and publisher of Shehan Karunatilaka, author of The Seven Moons of Maali Almeida, tweeted: ‘There are no words for this kind of joy, but if there were, @ShehanKaru would be sure to find them, slice them with the deadliest irony and deliver them with panache.’

She added: ‘Two Sri Lankan @TheBookerPrizes nominees two years in a row, vastly different in nearly every way, united by their ingenuity and brilliance. What a privilege it’s been to publish both, what a meaningful thing it is to have such powerful fiction out of Sri Lanka in this moment.’

John Mitchinson, co-founder of Unbound and co-host of the Backlisted podcast, offered his congratulations to Alan Garner, tweeting: ‘His 66 years of apprenticeship have been recognised. He will be 88 on 17 October, the day the Booker winner is announced. No one has ever deserved it more.’

The shortlist also received a positive response on Instagram, with Bernie Lombardi expressing a wide range of emotions: ‘Well damn, we’ve got a shortlist! Thanks @thebookerprizes for bringing some excitement to bookstagram: we are thrilled! We are devastated! We are pleasantly surprised! Our eyebrows are raised! After sleeping on it, I’ve decided I love the shortlist. it includes 3 out of 4 of my favorite longlisted books, but also, it’s forced me to reevaluate my biases about what literature is — 2 of the books i had dismissed as having no chance of being shortlisted. I was wrong!’

Eric Karl Anderson (lonesomereader) correctly predicted four of the six books on the shortlist. ‘I’m thrilled Bulawayo, Everett, Keegan and Karunatilaka made it,’ he said. ‘Their novels are extraordinarily clever, emotional and excellently written. Moreover they are all a JOY to read.’

A cracking list as @TheBookerPrizes shortlist revealed; 13 on the longlist down to just 6. NoViolet Bulawayo, Percival Everett, Alan Garner, Shehan Karunatilaka, Claire Keegan and Elizabeth Strout are on the list. The winner will be announced on October 17th

As the Booker Prize 2022 shortlist is announced, we’ve pulled together the most interesting facts and trends that have emerged in this year’s selection

‘Courageous’, ‘a revelation’, ‘gin fizz and blancmange all round’ – the Booker Prize 2022 longlist has been greeted with delight, curiosity and excitement by the media, publishers, influencers and even politicians