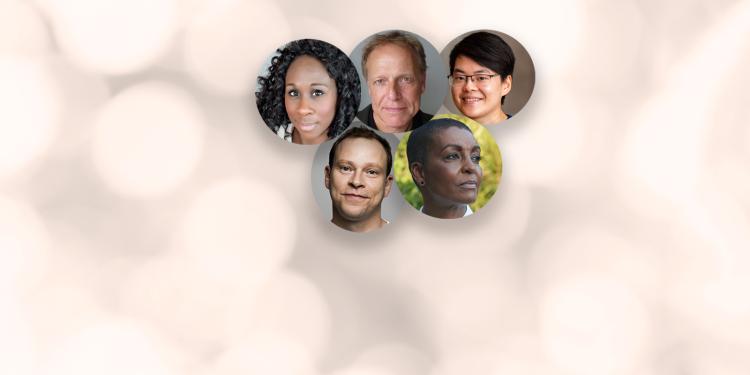 The judges for the Booker Prize 2023 have been announced, as the prize opens for submissions

The judges for the Booker Prize 2023 have been announced.

Novelist Esi Edugyan, twice-shortlisted for the Booker Prize, will chair the panel and will be joined by Adjoa Andoh, actor, writer and director; Mary Jean Chan, poet, lecturer, editor and critic; James Shapiro, Professor of English and Comparative Literature at Columbia University and author specialising in Shakespeare; and Robert Webb, actor and writer.

Publishers are also now invited to enter their books for the 2023 prize.

The judging panel will be looking for the best work of long-form fiction, selected from entries published in the UK and Ireland between October 1 2022 and September 30 2023.

‘Stendhal wrote: “A novel is a mirror carried along a high road.” Year after year the Booker Prize encourages us to take sight of ourselves in the lives of others, to slip for the length of a story into different skins, to grapple with unfamiliar worlds that allow us to see our own afresh. I’m deeply excited for the chance to immerse myself in great storytelling, in its enduring ability to shock, thrill, devastate, and console. I am especially delighted to get to do so alongside this brilliant and accomplished panel of judges, whose breadth of experience, viewpoints and vocations will no doubt make for rich conversation.’

Year after year the Booker Prize encourages us to take sight of ourselves in the lives of others, to slip for the length of a story into different skins, to grapple with unfamiliar worlds that allow us to see our own afresh.

‘I am hugely looking forward to working with this lively and lovely panel of readers. They bring to the task of discovering next year’s best fiction a strikingly wide range of knowledge and a shared enthusiasm for storytelling in all its forms.

‘Esi Edugyan described herself, in her latest book of essays, as “a storyteller with an interest in overlooked narratives”. That’s clear from her two Booker-shortlisted novels, Washington Black and Half Blood Blues, which, though very different from each other, are both magnificent entertainments and subtle acts of reimagining. I have no doubt that her astuteness and calm will bring out the very best in this glorious group.’

They bring to the task of discovering next year’s best fiction a strikingly wide range of knowledge and a shared enthusiasm for storytelling in all its forms.

Esi Edugyan (Chair) is the internationally bestselling author of Washington Black, which was shortlisted for the 2018 Booker Prize, the Los Angeles Times Book Prize, and the Carnegie Medal for Literary Excellence, among others – and won the Scotiabank Giller Prize. It was chosen by both the New York Times and Barack Obama as one of the best books of 2018. The epic Hulu/Disney TV series of Washington Black, starring Sterling K Brown and co-produced by Edugyan, is slated for release in Spring 2023.

Edugyan’s other novels include The Second Life of Samuel Tyne and Half-Blood Blues, shortlisted for the Booker Prize in 2011, as well as for the Women’s Prize for Fiction and the Governor General’s Literary Award. Half-Blood Blues won the Scotiabank Giller Prize and the Anisfield-Wolf Book Award.

Edugyan is also the author of Dreaming of Elsewhere: Observations on Home and more recently Out of the Sun: Essays at the Crossroads of Race, delivered in Canada as the Massey Lectures. Her first children’s book, Garden of Lost Socks, will be published next year by HarperCollins Canada.

Born and raised in Calgary, Alberta, Edygyan is a graduate of Johns Hopkins University and the University of Victoria, where she now lives. She has held fellowships in the US, Scotland, Iceland, Germany, Hungary, Finland, Spain, and Belgium, and judged prizes including the Giller Prize with Margaret Atwood and Jonathan Lethem.

Adjoa Andoh is one of Britain’s leading actors, who won global acclaim as Lady Danbury in the hit Netflix series Bridgerton - a role that saw her nominated for Outstanding Supporting Actress at the 2021 NAACP Image Awards. Elsewhere on the small screen in 2020 she played Dr Isaacs in the psychological thriller Fractured, as well as DI Nina Rosen in BBC1’s Silent Witness. In 2021 she starred as Nenneke in the Netflix blockbuster fantasy drama, The Witcher. Her many other television appearances include regulars in Dr Who, Casualty and Law & Order UK.

A renowned stage actor, Andoh has been celebrated for lead roles at the National Theatre - including Condoleezza Rice in Stuff Happens and Serafina Pekkala in His Dark Materials - and the Royal Shakespeare Company, where she played Portia in Julius Caesar, Ulysses in Troilus & Cressida and Helen of Troy in The Odyssey. In 2019 she conceived, co-directed, and played Richard II at Shakespeare’s Globe Theatre, in the UK’s first all women-of-colour production.

She made her Hollywood debut in 2009, starring alongside Morgan Freeman and Matt Damon in Clint Eastwood’s biographical sports film Invictus. Other film appearances include Adulthood, Brotherhood, and I Is A Long Memoried Woman.

She has been a BBC radio actor for over 30 years and is an award-winning narrator of over 150 audiobooks, including Americanah by Chimamanda Ngozi Adichie, Naomi Alderman’s The Power and all of the No. 1 Ladies Detectives Agency series by Alexander McCall Smith. She judged the AKO Caine Prize for African Writing in 2016 and was elected an Honorary Fellow of the Royal Society of Literature earlier this year.

Andoh is an Associate Artist at the Royal Shakespeare Company and Senior Associate Artist at The Bush Theatre. She was recently appointed as the Cameron Mackintosh Visiting Professor of Contemporary Theatre at the University of Oxford, joining a distinguished list of past professors that includes Stephen Sondheim, Arthur Miller and Sir Ian McKellen. In 2023 she will direct and star in a production of Richard III at the Liverpool Playhouse and Rose Theatre Kingston.

Mary Jean Chan is one of British poetry’s fastest rising stars. Flèche, a debut collection ingeniously organised around the sport of fencing, was published by Faber & Faber in 2019 and Faber USA in 2020. It won the Costa Book Award for Poetry and was shortlisted for numerous awards, including the International Dylan Thomas Prize, the John Pollard Foundation International Poetry Prize, the Jhalak Prize, the Seamus Heaney Centre First Collection Poetry Prize and a Lambda Literary Award. In 2018, Chan’s title poem from Flèche won the Geoffrey Dearmer Prize, awarded annually by the Poetry Society. Chan has twice been shortlisted for the Forward Prize for Best Single Poem and received a Society of Authors Eric Gregory Award for a collection by a poet under the age of 30 in 2019. That year, Chan was chosen by Jackie Kay as one of Kay’s ten best BAME writers in Britain.

In 2022, Chan co-edited with Andrew McMillan the landmark Vintage anthology 100 Queer Poems, which was recently selected as a Guardian Best Poetry Book of the Year and shortlisted for the Books Are My Bag Readers Awards. Chan’s poetry, essays and reviews have been featured in or are forthcoming from the New Republic, the New Statesman, the London Review of Books, Granta, the Poetry Review and the White Review, with their reviews appearing regularly in the Guardian. As an early career academic, Chan has written for the Review of English Studies, the Journal of American Studies and the Journal of British and Irish Innovative Poetry.

Born and raised in Hong Kong, Chan currently lives in Oxford and is Senior Lecturer in Creative Writing (Poetry) at Oxford Brookes University while also serving as a supervisor on the MSt in Creative Writing at the University of Oxford. In 2022, Chan was a Visiting Writer at the NTU Asia Creative Writing Programme in Singapore. Chan is a Rathbones Folio Prize Academy member, having judged the 2019 and 2020 Stephen Spender Prize for Poetry in Translation, the 2022 Jhalak Prize and the 2022 Queen Mary Wasafiri New Writing Prize. Chan’s second book, Bright Fear, is forthcoming from Faber in August 2023.

James Shapiro is Professor of English at Columbia University, where he has taught since 1985. Among his books are: 1599: A Year in the Life of William Shakespeare (2005), which was awarded the Samuel Johnson Prize; 1606: The Year of Lear (2015), awarded the James Tait Black Prize for Biography; and most recently Shakespeare in a Divided America (2020), selected as one of the ten best books of the year by the New York Times. He is currently at work on two books: Playbook: Politics, Theatre, and the Origins of America’s Culture Wars and Othello: An American Life.

He has been awarded fellowships from the Guggenheim Foundation, the Cullman Center of the New York Public Library, the National Endowment for the Humanities, and the Bogliasco Foundation, and in 2011 was inducted into the American Academy of Arts and Sciences. He has served on the Board of Directors of the Royal Shakespeare Company, the Folger Shakespeare Library, and the Authors Guild. He works with several theatre companies and is currently Shakespeare Scholar in Residence at New York’s Public Theater.

As an actor, Webb is best known for playing Jeremy Usborne in Peep Show, which ran for nine series, making it Channel 4’s longest-running sitcom. The programme won another two Baftas, two British Comedy awards and in 2004 was awarded the prestigious Rose D’Or for Best Comedy. In the theatre, Webb has played numerous roles in London’s West End, most notably in the Olivier Award-winning Jeeves and Wooster: Perfect Nonsense, in which he gave a performance described by the critic Frank Cottrell-Boyce as ‘the definitive Bertie Wooster of his generation’.

In 2009 he won the BBC1 charity dance competition, Let’s Dance for Comic Relief, giving a memorable interpretation of the audition scene from the movie Flashdance. In 2021 he competed for three weeks in BBC1’s Strictly Come Dancing before having to withdraw due to health issues (from which he has now fully recovered).

Webb’s documentary My Life In Verse focussed on the work of T S Eliot and featured Andrew Motion and Clive James among others. His 2017 memoir How Not To Be a Boy entered The Sunday Times non-fiction chart at number one, was serialised in the Guardian and was abridged for Radio 4’s Book of the Week. The audiobook, narrated by Webb himself, was Audible’s bestselling memoir of 2017. His debut novel Come Again was published in 2020, with the audiobook read by Olivia Colman.

He has written a weekly column for The Daily Telegraph, been an occasional contributor to The New Statesman and judged the BBC Young Writers’ Award. He holds an honorary doctorate from the University of Lincoln.

The Booker Prize is the leading literary award in the English-speaking world, and has brought recognition, reward and readership to outstanding fiction for over five decades. It is sponsored by Crankstart, a charitable foundation.

The 2022 winner, The Seven Moons of Maali Almeida by Shehan Karunatilaka – described by the TLS as ‘a rollicking magic-realist take on a recent bloody period in Sri Lankan history’, written with ‘with tinder-dry wit’, was hailed by booksellers, critics and readers. The book has experienced a huge global sales boost with the UK independent publisher Sort of Books reprinting 70,000 hardback copies, 30,000 trade paperbacks for export and airports, and 30,000 copies for the Australian market since the win on October 17. There have also been 70,000 reprints in the US and the same number again in India.

Translation rights have been sold by David Godwin and PFD in 26 languages, 24 of those since the Booker Prize win, with an audiobook released by Bolinda. The Seven Moons of Maali Almeida is released in paperback in March 2023.