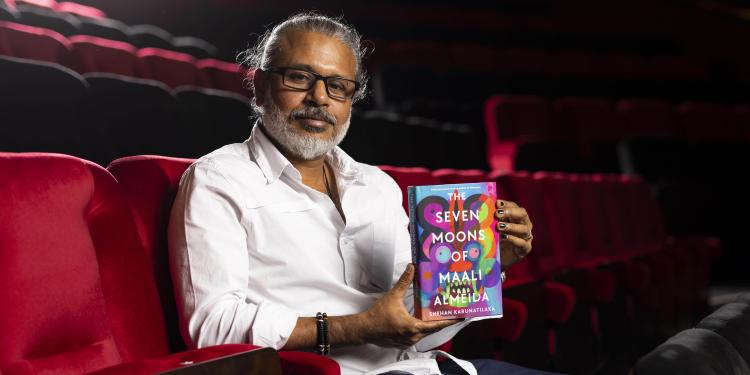 As Shehan Karunatilaka becomes the second Sri Lankan author to win the Booker, here’s everything you need to know about him and his prize-winning novel

Why did it win?

‘Any one of the six shortlisted books would have been a worthy winner. What the judges particularly admired and enjoyed in The Seven Moons of Maali Almeida was the ambition of its scope, and the hilarious audacity of its narrative techniques.

‘This is a metaphysical thriller, an afterlife noir that dissolves the boundaries not just of different genres, but of life and death, body and spirit, east and west. It is an entirely serious philosophical romp that takes the reader to ’the world’s dark heart’ — the murderous horrors of civil war Sri Lanka. And once there, the reader also discovers the tenderness and beauty, the love and loyalty, and the pursuit of an ideal that justify every human life.’

What is the book about?

During the height of the Sri Lankan civil war, Maali Almeida, war photographer, gambler and closet gay, has woken up dead in what seems to be a celestial visa office. His dismembered body is sinking in the Beira Lake in central Colombo and he has no idea who killed him.

At a time when scores are settled by death squads, suicide bombers and hired goons, the list of suspects is depressingly long.

But even in the afterlife, time is running out for Maali. He has ‘seven moons’ to find out who killed him and to try and contact the man and woman he loves most in order to lead them to a hidden cache of photos that will rock Sri Lanka.

Who is the author?

Shehan Karunatilaka is one of Sri Lanka’s foremost authors. In addition to his novels he has written rock songs, screenplays and travel stories.

He emerged on to the global literary stage in 2011, when he won the Commonwealth Book Prize, the DSL and Gratiaen Prize for his debut novel, Chinaman. The book was declared the second-best cricket book of all time by Wisden.

Born in Galle, Sri Lanka, in 1975, Karunatilaka grew up in Colombo, studied in New Zealand and has lived and worked in London, Amsterdam and Singapore. He currently lives in Sri Lanka. His work has been published in Rolling Stone, GQ and National Geographic. He has worked as an advertising copywriter and played guitar in a band called Independent Square.

What else have the Booker judges said about it?

‘The voice of the novel – a first-person narrative rendered, with an astonishingly light touch, in the second person – is unforgettable: beguiling, unsentimental, by turns tender and angry and always unsparingly droll.

‘The exhilarating energy with which we’re plunged into a rich and darkly comic world. This is Sri Lankan history as whodunnit, thriller, and existential fable teeming with the bolshiest of spirits. ‘You have one response for those who believe Colombo to be overcrowded: wait till you see it with ghosts.’

‘Maali himself is the heart and (literally) soul of the book, and he’s wonderful company, cheerfully unapologetic about what others might see as his failings, and uncowed – even by his own sudden death – in his commitment to his violently chaotic country and to Jaki and DD, the loves of his complicated life.

‘There’s relevance in every one of Seven Moons’ many layers. It’s not just that Sri Lanka’s present is almost as complex – if thankfully not as violent – as its past. This is also a deeply humane novel about how to live in intolerable circumstances, about whether change is possible, and how to set about coping if it’s not.’

What has the author said about the book?

‘I began thinking about it in 2009, after the end of our civil war, when there was a raging debate over how many civilians died and whose fault it was. A ghost story where the dead could offer their perspective seemed a bizarre enough idea to pursue, but I wasn’t brave enough to write about the present, so I went back 20 years, to the dark days of 1989.

‘1989 was the darkest year in my memory, where there was an ethnic war, a Marxist uprising, a foreign military presence and state counter-terror squads. It was a time of assassinations, disappearances, bombs and corpses. But by the end of the 1990s, most of the antagonists were dead, so I felt safer writing about these ghosts, rather than those closer to the present.

‘I’ve no doubt many novels will be penned about Sri Lanka’s protests, petrol queues and fleeing Presidents. But even though there have been scattered incidents of violence, today’s economic hardship cannot be compared to the terror of 1989 or the horror of the 1983 anti-Tamil pogroms.

‘I borrowed from a lot of mythologies and also the idea that the spirit hovers around for seven days - you see that in different forms of Buddhism and other eastern religions. But the real breakthrough was seeing the afterlife as a visa office, as a government bureaucracy with spirits wandering around, not knowing where they are supposed to go.

‘We have this illusion that all our questions will be answered when we breathe our last; you close your eyes, open them and it suddenly all makes sense. But it made more sense to me that you’d be absolutely more confused when you wake up.’

Who was the author's biggest influence?

‘Seven Moons took close to seven years to complete and Kurt Vonnegut was a constant companion. The genius I have robbed from the most is, of course, Uncle Kurt. For this book I didn’t need Vonnegut’s voice, as my protagonist was a droll thirty-something hipster, and already came with his own. But I did need Uncle Kurt’s gallows humour to make sense of the afterlife my characters were stuck in and the circumstances under which they perished.

‘The disgust Vonnegut felt for humanity and history’s barbarism resonated with the disillusion I felt for my beautiful island and the myopic fools who destroyed it. And his ability to view tragedy through the lens of the absurd, to blend genres and moods, and to be heart-breaking and hilarious within the space of a sentence, is the gold standard we all aspire to.’

What have the critics said?

The TLS:
‘A rollicking magic-realist take on a recent bloody period in Sri Lankan history, set in an unpeaceful afterlife. It is messy and chaotic in all the best ways. It is also a pleasure to read: Karunatilaka writes with tinder-dry wit and an unfaltering ear for prose cadences.’

The Times:
‘Karunatilaka respects the conventions of all the genres that he piles up so extravagantly. The whodunnit part leads to a suitably unguessable final revelation of the culprit. The thriller-like quest for the photos serves up several properly exciting cliff-hangers. However wild it becomes, the magic realism takes place within a well-thought-out framework of what is and isn’t possible.’

The Guardian:
‘Beneath the literary flourishes is a true and terrifying reality: the carnage of Sri Lanka’s civil wars. Karunatilaka has done artistic justice to a terrible period in his country’s history.’

The Hindu.com:
‘Karunatilaka increasingly raises questions of what you’re remembered as you die; what your love meant for those you left behind; and if it was all worth it in the end, to frequently moving effect.’

Read more about the book

The story so far: Maali Almeida, a war photographer, has been killed. In the afterlife, he has ‘seven moons’ to find out who murdered him, while, in the real world, local detectives must first find the rest of his body

The story so far: Maali Almeida, war photographer, gambler and closet queen, has woken up dead in what seems like a celestial visa office

Shehan Karunatilaka’s second novel is a searing, mordantly funny satire set amid the murderous mayhem of a Sri Lanka beset by civil war.

This is a brilliant book & a worthy winner of @TheBookerPrizes - The Seven Moons of Maali Almeida is funny, dark, magical realist; about ghosts, Sri Lanka’s horrific civil war & giving the disappeared a voice. I loved it. Congratulations Shehan Karunatilaka pic.twitter.com/oBTuscCgaR

And there’s this: a double win for South Asia at @TheBookerPrizes this year; a small step for the subcontinent, a giant leap for literature. pic.twitter.com/IaSQx7jlxJ

🏆 Congratulations to Shehan Karunatilaka, winner of the #BookerPrize2022!

The Queen Consort, who has long-championed the joy of reading and advocated for literacy, presented @ShehanKaru with the prize for his novel ‘The Seven Moons of Maali Almeida’.@TheBookerPrizes

Congrats to Shehan Karunatilaka from Sri Lanka! And what a night it was - the first in-person gathering of the @TheBookerPrizes in three years at London’s legendary @RoundhouseLDN. You can listen to his acceptance speech in full here: https://t.co/aRg42oJiMt https://t.co/NFaHLTnMvf