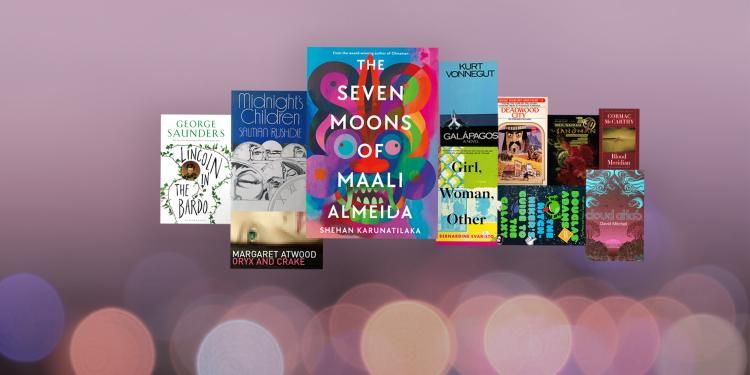 From classic sci-fi to interactive children’s books to previous Booker winners, we reflect on the novels that inspired the author of The Seven Moons of Maali Almeida

Shehan Karunatilaka is a man of many talents and wide-ranging interests. As a musician, he played guitar in a band named Independent Square. As a journalist, his writing has appeared in Rolling Stone, GQ and National Geographic. He has written children’s books and worked as an advertising copywriter. And as one of Sri Lanka’s leading authors, his second novel, The Seven Moons of Maali Almeida, has just won the Booker Prize 2022, a novel the Booker judges called ‘unforgettable: beguiling, unsentimental, by turns tender and angry and always unsparingly droll’.

It’s a book that spans multiple genres, from murder mystery to ghost story, with elements of magic realism and dark comedy, and with pop culture references throughout. So who and what inspired Karunatilaka to create this modern masterpiece? The answers may lie partly in his reading taste, which is wide and varied. ‘I grew up reading Agatha Christie and Stephen King. I still read a lot of Stephen King, for plot. His voice is very different, and it’s all in the service of the plot,’ he told the Daily FT. He admires writers who can talk about ‘big ideas in simple language’ and frequently references Margaret Atwood, George Saunders, Cormac McCarthy and William Goldman among those he holds dearest.

As well as literary influences, music played a part too. The author listened to plenty of 80s classics during the process of writing his draft, from artists such as The Police and Depeche Mode to Bruce Springsteen and The Smiths. You can listen to Karunatilka’s writing playlist on Spotify.

This broad church of influences have helped shape Karunatilaka into the formidable writer he is today. So, to celebrate his Booker win, we reflect on 10 books that led him to The Seven Moons of Maali Almeida.

Oryx and Crake by Margaret Atwood

Karunatilaka has regularly referenced Atwood as an influence and cited The Handmaid’s Tale as one of his favourite Booker-listed books. But it was Atwood’s later novel Oryx and Crake which Karunatilaka said had a direct influence on Seven Moons. The 2003 novel follows ‘Snowman’ finding his way in a post-apocalyptic world while searching for answers about his past, as the last human. While the plots differ, both Oryx and Crake and Seven Moons feature a protagonist attempting to understand and resolve the darker journey within their past, which led them to their troubled present. The novel is written with Atwood’s razor-sharp wit, a tone to which Karunatilaka is no stranger, either.

Karunatilaka read Cloud Atlas many times while writing Seven Moons, as well as watching the cinematic adaption. ‘I know some people say it’s confusing, but those people are wrong,’ he joked, when he answered readers’ questions on video earlier this month. David Mitchell’s visionary novel was shortlisted for the Booker in 2004, and he has been nominated five times in total for the prize. Cloud Atlas is a novel of six interconnected tales told from differing perspectives and, like Seven Moons, defies genre conventions. Beginning in 1850 and ending in a dystopian future, it is a labyrinth of stories, with each one knotted to the last. At its heart is human experience, which is brought to the forefront through a multiplicity of voices - something Karunatilaka chose to echo in Seven Moons, as he recently told the I: ‘I wanted to write a ghost story where the many victims, the voices that had been silenced, could speak.’

When asked by readers what his favourite childhood read was, Karunatilaka reached to show off a pile of books he recently bought on eBay. It was a stack of Choose Your Own Adventure books - the smash-hit series from the 1980s with multiple endings that allowed readers to choose their own path with each page turn. Edward Packard is credited as the creator of the series and authored over 50 books, including Deadwood City, a traditional Western where the reader makes their way through an old town looking for a job, but is instead taken on a wild adventure. Karunatilaka described the books as ‘innovative’ and told us that its narrative structure also had an impact on Seven Moons - both are unusual in that they are presented in the second person.

Lincoln in the Bardo by George Saunders

Karunatilaka was in the thick of writing Seven Moons when George Saunders won the Booker Prize in 2017 for Lincoln in the Bardo. Set against the backdrop of the American Civil War, Saunders’ unusual, otherworldly tale was a sensation upon publication. Abraham Lincon’s son Willie is trapped in a waiting room between life and rebirth, and a battle erupts for his soul. Sounds familiar? These parallels between Lincoln in the Bardo and Karunatilaka’s work-in-progress draft weren’t exactly welcome news for the writer. ‘I was struggling with this thing, and it was a mess, and another talking ghost book won the Booker. It’s a masterpiece,’ he recently told the Guardian. But instead of being deterred, he did what any great artist would do - soldiered on. ‘Is there room for another talking ghost book? Why not,’ he shrugged.

Sandman: The Kindly Ones by Neil Gaiman

As he wrote Seven Moons, Karunatilaka absorbed a ‘mix of literary and more traditional fantasy’. Neil Gaiman is one such author he’s always held close to his heart: ‘Gaiman’s dreamscape and its strange creatures can be a constant source of ideas, inspiration and pleasure,’ he told Bookshop.org. It was the ninth installment of Gaiman’s bestselling DC collection Sandman which he kept nearby when writing - a single storyline written as a Greek tragedy where lead character Morpheus is preyed upon by a group of avenging spirits. As well as its fantastical sensibilities, Karunatilaka drew influence from the acclaimed series for its ‘world building’.

Seven Moons is set against the bloodiest period in Sri Lanka’s history - its 26-year-long civil war. ‘1989 was the darkest year in my memory, where there was an ethnic war, a Marxist uprising, a foreign military presence and state counter-terror squads. It was a time of assassinations, disappearances, bombs and corpses,’ Karunatilaka told the Booker Prizes website recently. To channel these experiences to paper, he turned to Cormac McCarthy, who excels ‘at finding the poetry in violence and despair’, as he recently told Punch Magazine. McCarthy’s prose, particularly that of Blood Meridian, was influential when writing Seven Moons’ more gruesome scenes. It’s a bloodthirsty subversion of a Western that traces historical events from the Texas-Mexico border in the 1800s, where Indian scalps were routinely traded and death lurks around every corner. Not one for the faint of heart, but then what McCarthy novel is?

When asked about his greatest influences, Karunatilaka returns time and time again to one writer he calls his hero, ‘Uncle Kurt’ - Kurt Vonnegut. ‘Seven Moons took close on seven years to complete and Kurt Vonnegut was a constant companion’, he told the Booker website. During this period, he read and re-read the writer, including his 1985 satire Galapagos which Karunatilaka said is ‘less heralded than his 60s classics but, in my view, among his finest’. Narrated by a ghost a million years in the future, it’s an irreverent and darkly-funny novel where a group of human survivors on a Galapagos island are slowly evolving into a series of weird and wonderful creatures. Underneath the madcap veneer is a deep rebuke of the human race, excessive greed and warmongering. ‘Kurt Vonnegut’s ability to wrap a depressing truth in a joke is something I aspire to,’ Karunatilaka said, while adding what he admires most is how ‘Uncle Kurt deftly juggles plot, philosophy and humour with drawings, math problems and thought experiments, and makes it look effortless.’

The Hitchhiker’s Guide by Douglas Adams

In Seven Moons’ acknowledgements, Karunatilaka lists several writers to which he feels he owes a debt. Nestled among them is English sci-fi writer Douglas Adams. He cites Adams as one of his ‘big three’ influences (with Saunders and Vonnegut the other two). Adams is renowned for The Hitchhikers Guide, a global sensation which began life as a 1978 radio play and was later adapted for print, where it has sold over 15 million copies. The intergalactic series is now part of the national fabric, an end-of-the-world sci-fi where last human Arthur Dent wanders the galaxy after Earth gets demolished to make way for a hyperspace bypass. The subtext, however, is much darker, where Adams critiques our abuse of technology and blinkered worldview. One of the things Karunatilaka admires is Adams’ use of tone and way of conveying complex themes in a lighthearted manner: ‘Douglas Adams is talking about life, the universe and all these big concepts, but using absurdity and humour,’ Karunatilaka told Roar Media.

Girl, Woman, Other by Bernardine Evaristo

When Bernardine Evaristo won the Booker Prize in 2019 alongside Margaret Atwood, she became the first black woman to ever do so. Her winning novel Girl, Woman, Other follows the lives of 12 black British women across generations, exploring black identity and its struggles, alongside sexuality, love and family life. The Booker judges’ called it ‘a must-read about modern Britain and womanhood’ and said Evaristo’s style was ‘passionate, razor-sharp, brimming with energy and humour’. It was the author’s eighth novel and it went on to win numerous other prizes. Karunatilaka has cited Evaristo’s work as within his top five Booker-winning novels. At the 2022 Booker ceremony, Evaristo was one of the first authors to offer her congratulations.

Another favourite Booker title of Karunatilaka is Midnight’s Children. Karunatilaka is only the second Sri Lankan author to win the booker Prize and often draws influence from his wider region’s canon, too. ‘As a subcontinental writer, there’s no shortage of literary role models, like Rushdie,’ he told Roar Media. Rushdie’s magical-realist tale was critically acclaimed and won the 1981 Booker Prize. A child born at the moment of India’s independence with telepathic powers is connected to 1,000 other children born with similar gifts. It’s also a post-colonial novel, one which charts the country from the stroke of partition, and looks at personal and collective history, which we also see in Seven Moons. But beyond these bold themes, Karunatilaka has cited Rushdie’s prose as something he personally embraces. ‘Some people think Salman Rushdie’s prose is too chocolatey. I read all his early stuff, and I didn’t mind that I spent extra time on the page. It was lovely writing,’ he added.

Shehan Karunatilaka’s second novel won the Booker Prize in 2022. It is a searing, mordantly funny satire set amid the murderous mayhem of a Sri Lanka beset by civil war.