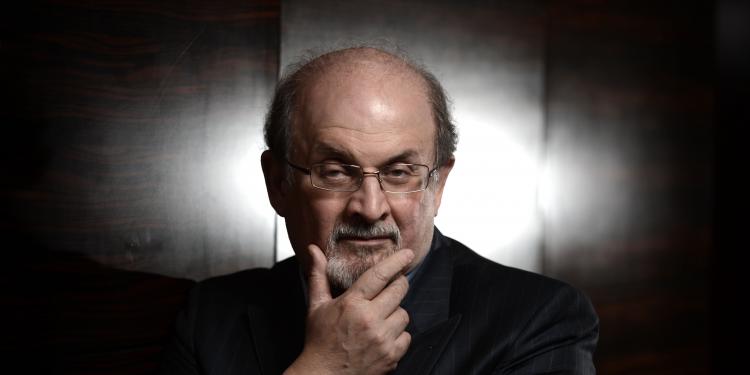 Salman Rushdie has been nominated for the Booker Prize seven times, winning in 1981, and was knighted for services to literature in 2007.

Born in Bombay, India, Rushdie is the author of 14 novels - Grimus, Midnight’s Children (which won the 1981 Booker Prize), Shame, The Satanic Verses, Haroun and the Sea of Stories, The Moor’s Last Sigh, The Ground Beneath Her Feet, Fury, Shalimar the Clown, The Enchantress of Florence, Luka and the Fire of Life, Two Years, Eight Months, and Twenty-Eight Nights, The Golden House and Quichotte (shortlisted for the 2019 Booker Prize).

He has also written a collection of short stories and four works of non-fiction. Rushdie was shortlisted, for his entire body of work, for the 2007 Man Booker International Prize.

He joined the Companions of Honour in the Queen’s Birthday Honours list in her Platinum Jubilee year.

The Satanic Verses, shortlisted for the 1988 Booker Prize, remains Rushdie’s most controversial work. The book was inspired by the life of the Prophet Muhammad and its publication led to accusations of blasphemy from many Muslims.

In February 1989, Iran’s Supreme Leader, Ayatollah Khomeini, issued a fatwa against Rushdie, calling for the author to be killed. Western governments condemned the death threats, which were also opposed by several Muslim leaders.

A week later, 12 people were killed in Mumbai when police attempted to stop thousands of protestors marching on the British High Commission. In May of that year, 30,000 protestors demonstrated outside the Houses of Parliament in London, while several British bookshops were firebombed. The offices of Rushdie’s UK publishers were picketed and death threats were sent to his American publishers.

Rushdie went into hiding and spent several years moving between safe houses and living under heightened security protection. In 1991, a week after the book’s Italian translator Ettore Capriolo was stabbed and injured at his home in Milan, the book’s Japanese translator Hitoshi Igarashi was stabbed to death in Tokyo. In 1993, the head of Rushdie’s Norwegian publishers was shot and injured.

In 1998, a year after Iran’s 15th Khordad Foundation, a non-governmental organization, offered $2.5 million for the killing of Rushdie, President Mohammad Khatami of Iran said the Rushdie affair was now ‘completely finished’. However, the threats continued; in 2012 the bounty on Rushdie’s head was raised to $3.3 million. In 2017, when asked whether the fatwa was still in effect, Iran’s current Supreme Leader, Ayatollah Ali Khamenei, said that ‘the decree is as Imam Khomeini issued’.

On 12 August 2022, Rushdie was attacked and seriously injured while delivering a lecture in Chautauqua, New York.

We are deeply shocked to hear of the brutal and unprovoked attack on Sir Salman Rushdie in New York State today. We condemn the senseless actions of his attacker and send our thoughts and best wishes to Salman.

Salman Rushdie’s 1981 magical realist masterpiece has been described as a ‘vertiginously excit­ing reading experience’. Find out more about Booker of Bookers-winner here.

It’s a privilege to be included in such illustrious company, both past and present.

Salman Rushdie on his appointment to the Companion of Honours

Saleem’s life is a whirlwind of disasters and triumphs that mirror the course of modern India at its most impossible, in Salman Rushdie’s masterpiece.

Salman Rushdie’s magical realist epic. Hugely complex and multilayered, it remains one of the most controversial books in recent literary history.

Salman Rushdie asks what we do when the world’s walls - its family structures, its value-systems, its political forms - start to crumble.

A killing in Los Angeles has its roots in a shattered paradise halfway across the globe, in Salman Rushdie’s inventive and powerful fiction.

The Enchantress of Florence

East meets West in a blaze of glory in Salman Rushdie’s masterful, magical story of a woman attempting to command her own destiny in a man’s world.

Salman Rushdie’s tragicomic tale is very much of our deranged time, but was inspired by Miguel de Cervantes’ classic Don Quixote.

Salman Rushdie reading list: a guide to his Booker-nominated novels