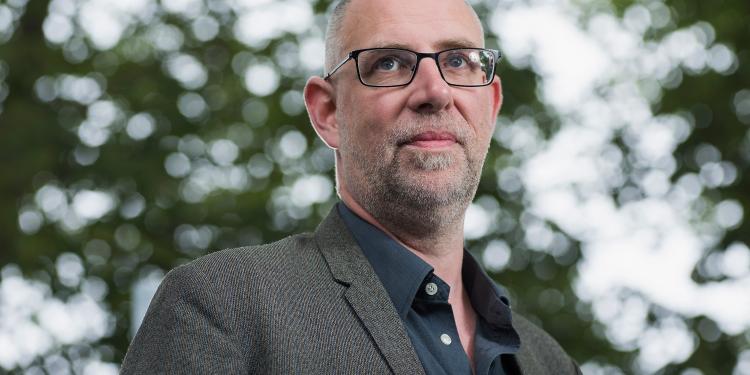 With Case Study longlisted for the Booker Prize 2022, we spoke to Graeme Macrae Burnet about surrounding his characters with real people, resisting classification and his favourite Booker books

It’s amazing for your work to be recognised among so many novels submitted to the judges. When you think of the passion and care that every novelist has put into their work, it’s quite humbling. I can’t pretend that I wouldn’t love to make the shortlist, but I genuinely haven’t thought about winning.

Critics have found it hard to classify your books, including Case Study - thrillers, literary puzzles, psychological dramas… How would you sum up Case Study for those who don’t know anything about it? What kind of book is it?

I love the fact that people find my books hard to classify. His Bloody Project has been called a crime novel, a historical novel, a gothic novel, literary fiction, as well as a true crime book(!). To me, it’s just a novel. Similarly with Case Study, I didn’t think at all about genre when I was writing it. What I want most is for readers to engage with the characters. I don’t subscribe to the view that you can either have emotional or intellectual engagement – I want both!

Your last Booker-nominated book read, in some ways, like historical true crime. Case Study plays with similar boundaries, and includes several real-life figures as minor characters (R.D. Laing, Joan Bakewell, Dirk Bogarde), leaving the reader questioning what is ‘true’. What is it about the boundary between fiction and fact that appeals to you as a writer?

I like to locate my characters in real places and surround them with real people (like the ones you mention). I think this enhances the feeling of authenticity that we all seek as readers. Certainly a good number of readers have already told me that they googled Collins Braithwaite while reading the book. I love that.

The book revolves around Collins Braithwaite, a wonderful, appalling, compelling and deeply charismatic character, who emerges fully formed and feels as real as the real-life characters in the book. How did you create him and is he based on anyone in particular?

I definitely had more fun writing Collins Braithwaite than any character I’ve written before. He’s a deeply unpleasant, outrageous character, but my challenge as a novelist was, I discovered, to try to make readers (and myself) care about him. His character is entirely fictional, but the ideas he expresses about psychiatry are certainly inspired by the writings of R.D. Laing.

Case Study explores ideas around identity and the notion of self, and the sense that no one is quite as they seem to the outside world. What made you want to explore those ideas?

I think because that is how I experience being in the world. To some extent, most people adopt different personae in different situations - the interesting question is to what extent these different personae can be regarded as ‘real’. In some ways, it is the struggle between two personae that is enacted by the nameless narrator of Case Study and her alter ego, Rebecca Smyth.

Tell us something about how you researched Case Study? You clearly immersed yourself in writing on psychotherapy, but the book also paints a vivid picture of 60s London and the culture of the time. Who and what were you reading to bring these worlds to life?

I love research and of course there’s no shortage of great material on the ‘Swinging 60s’, but for the vast majority of people the 60s weren’t swinging at all. Most folk still lived in post-war austerity Britain, with brown furniture and retrograde social attitudes. So while I did immerse myself in the fiction and memoirs of the 60s, by far the most important research I did was ploughing through issue after issue of women’s magazines from the time - where I found a quite different set of attitudes than the ones we popularly imagine of that period.

I write in the wonderful Mitchell Library in Glasgow. It’s basically a huge free office space for writers. I like the sense of going to work, and the separation of home space from work space. I struggled with that during lockdown.

You’re one of several writers on the longlist published by small independent publishers - what does that mean to you, and how does it affect you as a writer?

No matter what size a publisher is, I think it’s about having a relationship with a human being. Sara Hunt at Saraband has supported me from the beginning of my career. I don’t know if I’d still be writing without her. I feel a complete freedom to write whatever I want, whenever I want, regardless of how commercial it may or may not be. As I writer, I think that kind of backing is priceless.

I definitely had more fun writing Collins Braithwaite than any character I’ve written before. He’s a deeply unpleasant, outrageous character, but my challenge as a novelist was, I discovered, to try to make readers (and myself) care about him.

What are you working on next, and how does it compare with Case Study?

I’ve been working, a bit intermittently, on the final part of my French-set ‘sort-of-detective-novel’ trilogy. But there’s a Big Project that’s burbling away at the back of mind, which might just trample it underfoot.

It’s probably no surprise that, as a student in Glasgow in the 1980s, I devoured everything James Kelman wrote. A Scottish writer of course, but one steeped in the European tradition. But there are many others – Anita Brookner’s Hotel du Lac, Aravind Adiga’s The White Tiger, more recently, Anna Burns’ Milkman.

Nobody can write anyone else’s book. But if you’re really pushing me: Crime and Punishment.

Huge congrats to all the longlistees!

Gin fizz and blancmange all round! 🍸🍧🍸 pic.twitter.com/rcPXuG9Klg

Case Study was longlisted for the Booker Prize in 2022. Graeme Macrae Burnet offers a dazzlingly inventive - and often wickedly humorous - meditation on the nature of sanity, identity and truth itself.

Douglas Stuart, author of Shuggie Bain sits down to talk to us after being longlisted about writing his debut novel, setting a book in Glasgow and what he’s working on next.

Robin Robertson on how the culture around poetry has changed dramatically.