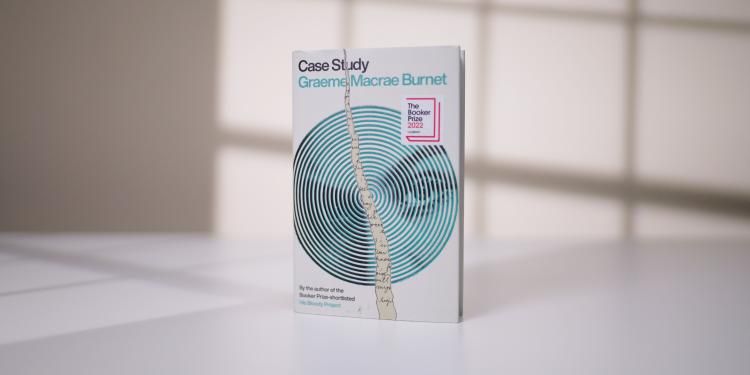 Graeme Macrae Burnet offers a dazzlingly inventive – and often wickedly humorous – meditation on the nature of sanity, identity and truth itself. Read the opening chapter here

London, 1965. An unworldly young woman believes that a charismatic psychotherapist, Collins Braithwaite, has driven her sister to suicide. Intent on confirming her suspicions, she assumes a false identity and presents herself to him as a client, recording her experiences in a series of notebooks. But she soon finds herself drawn into a world in which she can no longer be certain of anything, even her own character.

I have decided to write down everything that happens, because I feel, I suppose, I may be putting myself in danger, and if proved to be right (a rare occurrence admittedly), this notebook might serve as some kind of evidence.

Regrettably, as will become clear, I have little talent for composition. As I read over my previous sentence I do rather cringe, but if I dilly-dally over style I fear I will never get anywhere. Miss Lyle, my English mistress, used to chide me for trying to cram too many thoughts into a single sentence. This, she said, was a sign of a disorderly mind. ‘You must first decide what it is you wish to say, then express it in the plainest terms.’ That was her mantra, and though it is doubtless a good one, I can see that I have already failed. I have said that I may be putting myself in danger, but there I go, off on an irrelevant digression. Rather than beginning again, however, I shall press on. What matters here is substance rather than style; that these pages constitute a record of what is to occur. It may be that were my narrative too polished, it might lack credibility; that somehow the ring of truth lies in infelicity. In any case, I cannot follow Miss Lyle’s advice, as I do not yet know what it is I wish to say. However, for the sake of anyone unfortunate enough to find themselves reading this, I will endeavour to be clear: to express myself in the plainest terms.

In this spirit, I shall begin by stating the facts. The danger to which I have alluded comes in the person of Collins Braithwaite. You will have heard him described in the press as ‘Britain’s most dangerous man’, this on account of his ideas about psychiatry. It is my belief, however, that it is not merely his ideas that are dangerous. I am convinced, you see, that Dr Braithwaite killed my sister, Veronica. I do not mean that he murdered her in the normal sense of the word, but that he is, nonetheless, as responsible for her death as if he had strangled her with his bare hands. Two years ago, Veronica threw herself from the overpass at Bridge Approach in Camden and was killed by the 4.45 to High Barnet. You could hardly imagine a person less likely to commit such an act. She was twenty-six years old, intelligent, successful and passably attractive. Regardless of this, she had, unbeknown to my father and me, been consulting Dr Braithwaite for some weeks. This I know from his own account.

I remember less of what he actually said than his manner of delivering it. He had the air of a man to whom it would be futile to offer resistance. He spoke with a weary authority, as if tired of explaining himself to his inferiors.

Huge congrats to all the longlistees!

Gin fizz and blancmange all round! 🍸🍧🍸 pic.twitter.com/rcPXuG9Klg

Like most people in England I was familiar with Dr Braithwaite’s uncouth Northern drawl long before I encountered him in person. I had heard him speaking on the wireless, and had even once seen him on television. The programme was a discussion of psychiatry hosted by Joan Bakewell.* Braithwaite’s appearance was no more attractive than his voice. He wore an open-necked shirt and no jacket. His hair, which reached to his collar, was dishevelled, and he smoked constantly. His features were large, as if they had been exaggerated by a caricaturist, but there was something, even on television, that drew one’s eyes to him. I was only vaguely aware of the other guests in the studio. I remember less of what he actually said than his manner of delivering it. He had the air of a man to whom it would be futile to offer resistance. He spoke with a weary authority, as if tired of explaining himself to his inferiors. The participants were seated in a semi-circle with Miss Bakewell in the centre. While the others sat up straight, as if attending church, Dr Braithwaite slouched in his seat like a bored schoolboy, his chin slumped on the palm of his hand. He appeared to regard the other contributors with a mixture of contempt and boredom. Towards the end of the programme, he gathered up his smoking materials and walked off the set, muttering an expletive that there is no need to repeat here. Miss Bakewell was taken aback, but quickly recovered her composure and remarked that it was an admission of the poverty of her guest’s ideas that he was unwilling to engage in debate with his peers.

The following day’s newspapers were filled with condemnation of Dr Braithwaite’s behaviour: he was the embodiment of everything that was wrong with modern Britain; his books were filled with the most obscene ideas and displayed the basest view of human nature. Naturally, the following day I visited Foyle’s during my lunch hour and asked for a copy of his most recent book, which laboured under the unappealing title of Untherapy. The cashier handled the volume as though it carried the danger of infection, and gave me a disapproving look I had not experienced since I acquired a copy of Mr Lawrence’s disreputable novel. My purchase remained under wraps until I was safely ensconced in my room after supper that night.

I should say that, prior to this, my knowledge of psychiatry was exclusively derived from those scenes in films in which a patient reclines on a settee and recounts her dreams to a bearded physician with a Germanic accent. Perhaps for this reason, I found the opening part of Untherapy difficult to follow. It was full of unfamiliar words, and the sentences were so long and convoluted that the author would have benefited from following Miss Lyle’s advice. The only thing I gleaned from the introduction was that Braithwaite had not even wanted to write this book in the first place. His ‘visitors’, as he called them, were individuals, not ‘case studies’ to be paraded like sideshow freaks. If he now set out these stories, it was for the sole purpose of defending his ideas against the scorn poured on them by the Establishment (a word he used a great deal). He declared himself to be ‘an untherapist’: his task was to convince people that they did not need therapy; his mission was to bring down the ‘jerry-built edifice’ of psychiatry. This struck me as a most peculiar position to adopt, but, as I have said, I am not well versed in the topic. The book, he wrote, could be seen as a companion to his previous work, and  consisted of a series of narratives based on relationships he had entered into with troubled individuals. Naturally, the names and certain identifying details had been changed, but the fundamentals of each story were, he insisted, true.

Having got past the baffling opening section, I found these stories frightfully compelling. I suppose there is something reassuring about reading about those duds who make one’s own eccentricities pale by comparison. By the time I was halfway through I felt positively normal. It was only when I came to the penultimate chapter that I found myself reading about Veronica. The most sensible thing, I think, is simply to insert these pages here.

* This edition of Late Night Line-Up aired on BBC2 on Sunday 15th August 1965. The other participants were Anthony Storr, Donald Winnicott and the then Bishop of London, Robert Stopford. R.D. Laing had been invited to take part but refused to share a platform with Braithwaite. There is, unfortunately, no surviving footage of the programme, but Joan Bakewell later wrote that Braithwaite was ‘one of the most arrogant and unpleasant individuals’ she had ever had the misfortune to meet.

Case Study by Graeme Macrae Burnet is published by Saraband, £9.99

With Case Study longlisted for the Booker Prize 2022, we spoke to Graeme Macrae Burnet about surrounding his characters with real people, resisting classification and his favourite Booker books