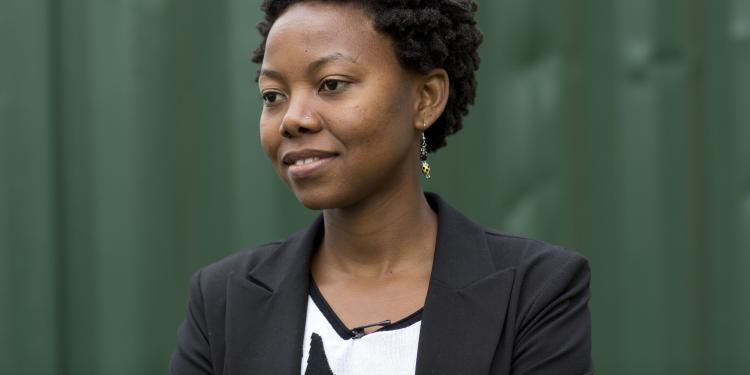 With her second novel shortisted for the Booker Prize 2022, we spoke to NoViolet Bulawayo about the influence of her grandmother’s storytelling, Orwell comparisons… and her love of Post-it notes

Read an extract from Glory here.

How does it feel to be longlisted for the Booker Prize 2022, especially having been shortlisted in 2013? Does it feel different this time?

I’m deeply honoured now, as I was deeply honoured back then - having my work considered twice is a compliment. The prize has certainly grown bigger over the last near-decade, with some fresh, exciting names making the lists.

What would winning the Booker mean to you?

Rumour says it’s a career-changing prize, and that’s a good thing for anyone.

How long did it take to write Glory, and what does your writing process look like? Do you type or write in longhand? Are there multiple drafts or sudden bursts of activity? Is there a significant amount of research and plotting before you begin writing?

Glory took about three years to create. I was lucky in the sense that I could fully commit to a rigorous writing schedule with no other obligations during that whole time, otherwise it would have taken much longer than that.

I value the process of thinking and writing on paper, and so my first multiple drafts must be written in longhand. This can mean a nightmare when it comes to managing longer drafts, but the process has a clarity and intimacy I can’t seem to achieve on a gadget, and that makes it all worth it. I do enough research to allow me to know my material, then I put it aside and tell the story.

I write wherever I find myself; the only requirements are absolute solitude, a big desk and a big comfy bed, both for sleeping and writing.

When things are going well my working space is messy - Post-its on every imaginable surface, paper everywhere, stacks of notebooks. I remember in the middle of writing Glory, during a residency, coming to find my room all made up, my Post-its arranged in neat stacks by the wonderful ladies who kept the place clean. This is to say my working space can get extreme.

Critics have drawn obvious parallels between Glory and Orwell’s Animal Farm. Were there any other books or authors that influenced you while writing the book? Animals feature heavily in African folklore - how much of that influenced you?

Folklore influenced me heavily - thanks to a childhood of constant exposure to my grandmother’s fantastic animal stories that were generally meant to educate and entertain us way before books. I came to Orwell’s Animal Farm from this formative background, and it’s important to acknowledge it as an equally compelling influence.

Besides Orwell, other authors who meant a lot to me for this novel include Gabriel García Márquez, Ngũgĩ wa Thiong’o, Junot Díaz, Patrick Chamoiseau, Mario Vargas Llosa and Ahmadou Kourouma.

What made you decide to write a novel based on recent events in Zimbabwe as an allegory seen through the eyes of animals? Why not humans?

Animals gave me the distance from a public drama that was often unfolding and changing shape as I was writing it (first as a work of non-fiction), and that understandably attracted so much attention it felt I was in a kind of weird competition with different commentators.

The animal kingdom freed me to make the story mine, deliver it on my own terms, with as much (at least, one hopes) freshness, inventiveness and madness as I dared bring on board. I must say the mind-blowing absurdity of Zimbabwe’s politics also made the choice the right fit, certainly the terms of reference by my frustrated countryfolk on social media suggested the same and influenced some of my choices.

The ‘Father of the Nation’ in the book is a horse; another main character, Destiny, is a goat - what made you alight on certain animals for certain characters?

There was some loose reliance on general characteristics of animals that informed the casting process, for example the Father of the Nation’s power is aligned to his physical might and so it made sense to make him a horse, it being the larger and more powerful of farm animals, while Defenders (the army and the police), often being violent and vicious in Glory, definitely needed to be dogs.

But many of the choices were driven by what would work for the story, without burdening my characters with having to adhere to specific or expected animal traits. I could create fresh, unpredictable characters this way.

The book is inspired by the fall of Mugabe, but how much has living in America inspired your recent writing, including Glory, especially in the era of Trump and with the growing divisions in American society?

My work is almost always in conversation with the world around me, and that of course includes my two complicated homes, Zimbabwe and the US. There’s certainly enough of America, and many other countries, in Glory - the novel may be inspired by a specific place, but tyranny isn’t just a Zimbabwean problem. The story fits so many places and can happen anywhere.

It’s a very funny book, unlike the real-life subject matter that inspired it. Why was it important to you to find humour in the situation you’re describing in Glory?

My work often tends toward difficult material, and I look to humour to help make it approachable, even enjoyable. But in Glory I’m also interested in humour as subversive power - the kind that challenges tyranny and reduces it to nothingness.

Bless the Daughter Raised by a Voice in Her Head by Warsan Shire, The President and the Frog by Carolina De Robertis, and The Last White Man by Mohsin Hamid.

Do you have a favourite Booker-winning or Booker-shortlisted novel and, if so, why?

Favourites change all the time, but The God of Small Things by Arundhati Roy has a special place in my heart - sensory, haunting and ambitious.

Too many. One Hundred Years of Solitude is one of them.

Glory was a lot and took a lot; tholukuthi - I’m still recovering!

We are delighted that #Glory by NoViolet Bulawayo is longlisted for the #BookerPrize2022, a dazzling story of tyranny and uprising, told by a vivid chorus of animal voices that helps us see our human world more clearly. Congratulations to all longlisted authors! @TheBookerPrizes pic.twitter.com/uqJF26CmzN

This energetic and exhilarating joyride from NoViolet Bulawayo is the story of an uprising, told by a vivid chorus of animal voices that help us see our human world more clearly.