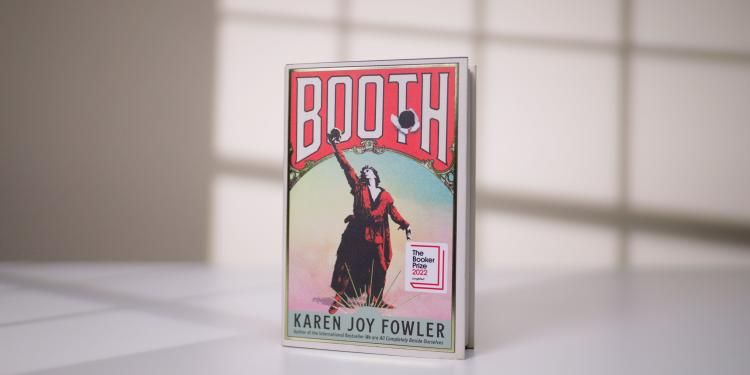 Karen Joy Fowler’s epic novel about an ill-fated family of thespians, drinkers and dreamers, whose most infamous son is destined to commit a terrible and violent act. Read the opening chapter here

Junius is the Booth patriarch. A celebrated Shakespearean actor who fled bigamy charges in England, he is both a mesmerising talent and a man of terrifying instability. As his children grow up in a remote farmstead in 1830s rural Baltimore, the country draws ever closer to the boiling point of civil war.

Of the six Booth siblings who survive to adulthood, each has their own dreams they must fight to realise - but it is Johnny who makes the shocking decision that will change the course of history.

The people who live there call it the farm, though it’s half trees, woodland merging into dense forest. A two-­story, two-­room log cabin has been brought from a nearby acreage on rollers greased with pig lard. The walls are whitewashed, the shutters painted red. A kitchen is added on one side, a bedroom and loft on the other. The additions stand off the main room like wings. There is nothing special about this cabin with its low ceilings, meager windows, and canted staircase, and moving it was a costly business, every local ox and man hired for the job. This all left the neighbors with the impression that the new owner was a bit crazy, a thought they never had cause to revise.

The relocation puts the cabin beside Beech Spring, where the water is so clean and clear as to be invisible. But, and the neighbors suspect that this is the real purpose, it’s also a secret cabin now, screened from the wind and the road by a dense stand of walnut, oak, tulip, and beech. Still, since everyone in the neighborhood helped move it, everyone in the neighborhood knows it’s there. The nearest neighbors are the Woolseys on one side and the Rogerses on the other. Bel Air, the county seat, is three miles away; the big city of Baltimore some thirty miles of rough coach road to the south and west.

Improvements are made. Orchards of peach, apple, and pear are planted; fields of corn, cane sorghum, barley, and oats; a kitchen garden of radishes, beets, and onions. A cherry tree sprig is set near the front door and carefully tended. A granary, stables, barn, and milking shed are built. Three large, black Newfoundland dogs arrive to patrol the grounds. They are chained during the day and loosed at night. The neighbors describe these dogs as savage. Zigzag fences are erected or repaired. The mail is delivered on horseback once a week, thrown over the gate by a postboy, who whistles through two fingers as he passes, driving the dogs to a frenzy of howling and rattling chains. A secret family moves into the secret cabin.

Sixteen years pass. The family grows, shrinks, grows. By 1838, the children number at nine, counting the one about to arrive and the four who are dead. Eventually there will be ten.

These children have: A famous father, a Shakespearean actor, on tour more often than at home.

A paternal grandfather, skinny as a stork, with white hair worn in a single braid, his clothing also fifty years out of fashion, breech trousers and buckle shoes. He’s come from London to help out during their father’s long absences. He was once a lawyer, treasonably sympathetic to the American revolutionaries, enthusiastic for all things American. Visitors to his London house were made to bow before a portrait of George Washington. Now that he lives here, he hates it. He likens the farm to Robinson Crusoe’s island, himself a marooned castaway on its desolate shore. He’s rarely sober, which makes him less helpful than might have been hoped.

An indulgent mother. A dark-­haired beauty with retiring manners, she’d once sold flowers from her family nursery on Drury Lane. She’d first seen their father onstage as King Lear and was astonished, when meeting him, to find that he was young and handsome. He’d had to perform the Howl, howl, howl, howl speech right there in the London street before she’d believe he was the same man. “When will you spend a day with me?” he’d asked within minutes of learning her name. “Tomorrow?” and she’d surprised herself by saying yes.

During their brief courtship, he’d sent her ninety-­three love letters, pressing his suit with his ambition, his ardor, the poems of Lord Byron, and the promise of adventure. Soon enough, she’d agreed to run away with him to the island of Madeira, and from there to America.

For seventeen years, almost without break, she’s been either expecting a baby or nursing one. It will be twenty continuous years before she’s done. Later, she’ll tell their children it was Lord Byron’s poems that tipped the scales

Perhaps adventure was more implied than promised outright. After they’d left their families in England, after they’d had their first child, after they’d arrived in Maryland and leased the farm on a thousand-­year lease, after he’d arranged to move the cabin onto it, only then did he explain that he’d be touring without her nine months of every year. For nine months of every year, she’d be left here with his drunken father.

What else could he do? he asked, leaving no pause in which she might answer; he was a master of timing. He needed to tour if they planned to eat. And clearly, she and the baby couldn’t come along. There is nothing worse than an unhappy, complaining shrew for a wife, he’d finished, by way of warning. He didn’t plan on having one of those.

So here she’s been, on the farm, for sixteen years now. For seventeen years, almost without break, she’s been either expecting a baby or nursing one. It will be twenty continuous years before she’s done. Later, she’ll tell their children it was Lord Byron’s poems that tipped the scales. She’ll mean this as a caution but she’ll know it won’t be taken as such. All her children love a good romance. None of the children know that they’re a secret. It will come as quite a shock. They’ve no cause for suspicion. Much like the secret cabin, everyone they know knows they’re here.

Lincoln and the Perpetuation of Our Political Institutions

Is it unreasonable then to expect, that some man possessed of the loftiest genius, coupled with ambition sufficient to push it to its utmost stretch, will at some time, spring up among us? And when such a one does, it will require the people to be united with each other, attached to the government and laws, and generally intelligent, to successfully frustrate his designs. — Abraham Lincoln, 1838

In January of 1838, Lincoln delivers, to the Young Men’s Lyceum of Springfield, his first major speech. He is one month shy of his twenty-­ninth birthday, recently reelected to his third term in the Illinois General Assembly. He’s already been a farmer, a clerk, a postmaster, a surveyor, an army captain, and a lawyer.

Two horrific murders, the first of a black man, the second of a white, form the backdrop to this speech. The first was the lynching of twenty-­six-­year-­old Francis McIntosh in St. Louis. McIntosh was tied to a tree and burned alive. A grand jury being convened, the judge instructed them not to blame the mob, but rather those abolitionists who had stirred things up. He called one out by name—the minister and newspaper editor Elijah Lovejoy. Lovejoy then fled St. Louis for Alton, Illinois, where the mob killed him anyway. In that trial, the jury chair had been part of the mob and the judge himself was called as a witness for the defense. In neither case was anyone found guilty.

The death of the white man, Lovejoy, has a national impact. This is allegedly the moment John Brown decides to devote his life to the eradication of slavery. But both murders affect Lincoln deeply. In his speech, he warns of two possible threats to the re‑ public. The first is found in the lawless actions of the mob, the second in the inevitable rise someday of an aspiring dictator. The gravest peril will come if the mob and the dictator unite.

Booth by Karen Joy Fowler is published by Serpent’s Tail, 8.99