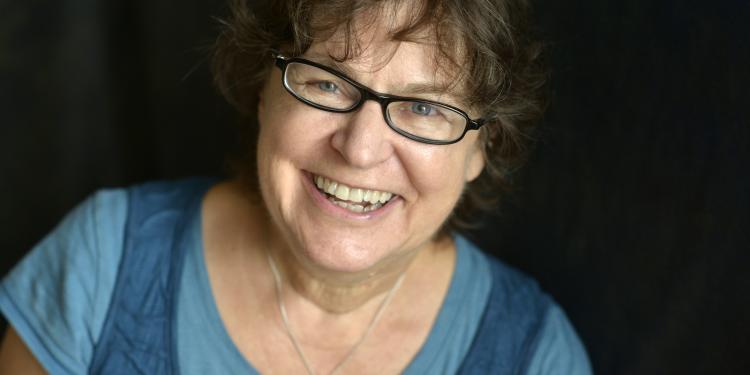 With her novel, Booth, longlisted for the Booker Prize 2022, we spoke to Karen Joy Fowler about science fiction, Donald Trump and the challenges of writing with a dog on her lap

Read an extract from Booth here.

How does it feel to be longlisted for the Booker Prize 2022, especially having been shortlisted in 2014? Does it feel different this time?

It feels exactly the same. Completely unexpected, wonderfully thrilling, enormously gratifying, hugely fortunate. The day I heard was just such a great day to be me.

What would winning the Booker mean to you?

This is a future beyond my ability to imagine. I spent a lot of time as an aspiring writer thinking about and learning to survive failure and rejection. I never put the same effort into wondering what success might feel like. Surprise me!

How long did it take to write Booth, and what does your writing process look like? Do you type or write in longhand? Are there multiple drafts or sudden bursts of activity? Is there a significant amount of research and plotting before you begin writing?

Writing Booth took somewhere between 8 to 10 years; I didn’t work continuously so it’s hard to say. But I always read for at least a year before I begin to write, searching for my story, and Booth was no different. I work on the computer; I write in fits and starts. I’ve always wanted a routine, but not enough, apparently, to establish one.

I use a laptop so the story is portable. I’m generally at home, moving chairs as the mood strikes me. There is a sleeping dog on my lap, making the typing awkward. People think I write slowly, but they don’t understand the obstacles I’m working around.

You began your career as a writer of sci-fi - now you’re writing historical fiction. Would you like to see more writers move between genres, and how difficult was it for you to do so? Might you ever return to sci-fi?

You’ve mentioned that when Donald Trump was elected President you abandoned writing a novel and came up with the idea for Booth instead. What made you alight on the story of John Wilkes Booth and what are the parallels with modern America?

This is not exactly right. I was working on Booth when Trump was elected so the novel I abandoned was the same one I returned to. But my focus changed. Initially, I was thinking about guns, about the families of shooters. When I returned, I was much more focused on the Civil War, all the ways in which it never ended.

Like the UK, America - and much of the world - is in a turbulent, challenging and sometimes frightening period. Will we see more fiction responding to that and how might it change the creative landscape?

My parents lived through the Great Depression, World War Two and McCarthyism. I wish they were here to provide calibration, because things do seem unprecedently dire. Bookstores tell me there are periods when the reading public wants to deal seriously with the world and periods when all they want is escape. I can’t guess which is coming next. But if anyone can write us out of these calamities, please do so.

I am a huge fan of all Hilary Mantel’s work. I blame her for the fact that when I sat down to write a historical novel, present tense just seemed natural.

Like the story of Henry VIII in England, the assassination of Abraham Lincoln is familiar to all Americans from childhood. How difficult was it to find a new way of approaching this story? Were you influenced at all by Hilary Mantel’s Wolf Hall or other historical novels?

I am a huge fan of all Hilary Mantel’s work. I blame her for the fact that when I sat down to write a historical novel, present tense just seemed natural.

Which authors have particularly influenced or inspired your own writing, and why?

In chronological order: TH White, Ursula Le Guin, Maxine Hong Kingston and, of course, many others. Mere words are insufficient to explain why.

I’ve loved so many, but I’m reaching into the wayback machine here for Illywhacker. Though I haven’t re-read it in years and am trusting to my younger self in saying so.

My own next. It would be so great to have it done without having had to actually do it.

It’s a great big wonderful doorstop of a book and it kept me company all last month. Highly recommend! https://t.co/fy9UswAbCb

Longlisted for the Booker Prize in 2022. Karen Joy Fowler’s epic novel about an ill-fated family of thespians, drinkers and dreamers, whose most infamous son is destined to commit a terrible and violent act.