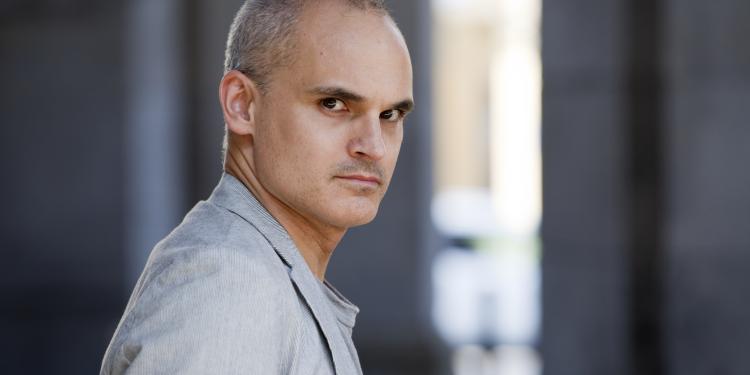 With Trust longlisted for the Booker Prize 2022, we spoke to Hernan Diaz about tackling the taboo of money, why he writes with a fountain pen and his love of Borges

Read an extract from Trust here.

How does it feel to be longlisted for the Booker Prize 2022, and what would winning the Booker mean to you?

Because the Booker Prize defies geographical boundaries by potentially including books from every continent, the award is a testimony to the capaciousness and hospitality of the English language, which is where I found my home. This is why being nominated is especially meaningful to me. It is wonderfully disorienting to have been longlisted. I don’t think I will ever get used to that sticker on the cover.

What was the starting point for Trust? Was it a character or situation or something in the news? Was it a slowburn idea or a moment of clarity? What made you want to write this particular book now? Is money – and the people who make lots of it – one of the defining obsessions of our age?

While being a force that shapes our lives, money is also a taboo. This dissonance was interesting to me. Then, as I started to read toward this book, two things became immediately apparent: the first is that women have been utterly erased from narratives of accumulation of capital; the second is that there are precious few novels about money making - in fiction, money has almost always already been made. I was also attracted to the fictional quality of money (it is, after all, a convention that all of us have been forced to accept) and how this fiction can impact and alter the world. This led me to reconsider the relationship between literature and power, on the one hand, and the evanescent line separating fiction from history, on the other.

And through it all, I was, of course, influenced by current events. It seems that we live in an age where reality itself has become a luxury good: something that can be bought and imposed on others. Literature is tremendously important in this context: it encourages us to think critically and productively about the connection between fiction and truth – and how stories, more than merely mimicking reality, can shape it.

What does your writing process look like? Do you type or write in longhand? Are there multiple drafts, long pauses, sudden bursts of activity? How long did Trust take to write?

I don’t write drafts. There is only one version that is constantly edited along the way. I write with a fountain pen in large format notebooks. I enjoy the feeling of it: the flowing ink, the rumor of the pen on the paper… There’s also the matter of pacing – longhand is the right speed for me. And word processors force you into a gridded, rigid relationship with the page.

With a pen, you create your own geography, with its islets of thoughts and streams of associations. And crossing out passages rather than deleting them allows one to reconsider changes that would have been lost in a digital file. I should add that, throughout the whole writing process, I read voraciously everything I can find pertaining to the project. It is total and full immersion. I spent about four years in Trustland.

Trust is really four books in one, each challenging the certainties of the others. Structurally, how difficult was the book to construct and what particular challenges did such an unusual construction present?

Voice - who is given one and who is silenced – is a major issue in Trust. Instead of merely discussing or thematising this issue, I decided to enact it formally. That was when the polyphonic structure with the four books-within-the-book took off, which presented two main challenges.

The first one had to do with plot and the organisation of the story: How do the pieces fit together? What interstices do I want to leave open for the reader to fill? How will one story contradict or confirm the other? The second challenge had to do with genre and style. There is a whole novel-within-the novel, a historical document, a memoir, and a personal journal. The four fictional writers authoring each one of these sections are immensely different from one another.

You’ve been praised for having a very good ear for the differing narrative styles of each of the book’s four distinct sections. The first section, a 1930s bestseller named Bonds, feels like a novel of its time. How did you capture its authentic flavour, and what were your influences?

I did my best to disappear from this book and let four different people take over. But some of my verbal tics seeped into each one of these voices. To remedy this, I composed four strict style guides – one for each author – detailing their punctuation, syntax, vocabulary, and grammatical idiosyncrasies. The tone of the first section results, in part, from engaging with some formal experiments of the 30s while also retaining a turn-of-the-century ring. The presence of Edith Wharton and Henry James can be felt everywhere in that part - but also Vernon Lee’s travel writing, for instance.

Part of the novel’s overall plan, however, was to create an arc going from realism to modernism – and beyond. The last section was conceived almost as a modernist prose poem. There are more or less overt references to Virginia Woolf, Jean Rhys, Gertrude Stein, and several other authors from the period. Meanwhile, the third section owes a great deal to some New Journalism writers like Lillian Ross and, crucially, Joan Didion.

Trust is saturated with references to British and American literature from the last hundred years. I also conducted extensive archival research and read countless documents written by the wives of real-life tycoons. Listening to their voices, many of which had remained unheard for a century (it was clear no one had ever gone through some of those manuscripts since they had been stored away), was quite moving.

In other interviews you have said that, in your research for the book, you realised that all the narratives around great wealth were from the viewpoint of men. Is that something you were particularly keen to address or correct in Trust?

Political power is always grounded in economic power – and both rely on the power of narrative for their perpetuation. Women have historically been excluded from partaking in the financial system. It was not until the 1960s in the US and 1975 in the UK that women were allowed to open a bank account in their own name, without their husband or father co-signing on it. The New York Stock exchange admitted its first woman in 1967; the London Stock Exchange followed suit in 1973.

These two examples help understand why there are no women in the great epics of wealth. Those myths are always about a self-made man. And in the vainglorious, manspreading autobiographies of financiers and captains of industry, the women around them are usually confined to the roles of wife and secretary – two stereotypes that Trust aims to subvert. It became pressing to me to address this exclusion and this utter erasure. Misogyny across the ideological spectrum (one of the main characters, an Italian anarchist, embodies a specific kind of ‘revolutionary machismo’) is a central concern of the novel.

One reviewer has said that Trust is ‘one of those novels that’s always pulling a fast one on the reader’ and delights in showing us how gullible we are. Was that as much fun as it sounds?

It was great fun! But I take the ethical implications of storytelling very seriously. While I am quite overtly encouraging readers to question the assumptions with which they enter into a text (and the degree of truthfulness they are willing to assign to it), I am also careful never to deceive anyone or to imply, at any point, that they are ‘gullible’.

I believe there is a moral dimension to how a narrative administers knowledge. Despite the twists and turns this book may take, many of the clues are there from early on. If the novel shifts perspectives and changes voices, it is because Trust is an attempt at exploring the nature of storytelling itself.

I love to read, and hope to write fiction that invites us to reflect on what literature may be. This implies challenging conventions while treating the reader with respect. I am interested in literature that takes the reader seriously. In fact, I always assume my interlocutor will be much smarter than me.

It seems that we live in an age where reality itself has become a luxury good: something that can be bought and imposed on others.

You wrote a book about Borges and are steeped in Latin American literature. Did some of the playfulness in your own work stem from that reading background?

Borges has shaped me not only as a reader and as a writer but also a person. His playfulness with genre, his joyful disregard for taxonomies of any kind, and his obsession with framed narratives are some of the aspects of his work that have influenced me.

I am reading the entire Booker longlist. I had read and loved three of the books on the list before the announcement. But now I am catching up. And I am dazzled.

I just looked up all the authors shortlisted over the last half century and got a spell of vertigo. Impossible to pick just one! So many of my favorite writers are in there. I think my answer to this question would change every day. Today, I submit Muriel Spark’s The Driver’s Seat, one of the strangest, most disturbing novels I have ever read.

We are tremendously proud to publish these two fantastic books 📚 ❤️ https://t.co/UrHWjZ0oP1

Longlisted for the Booker Prize in 2022. A literary puzzle about money, power, and intimacy, Trust challenges the myths shrouding wealth, and the fictions that often pass for history.