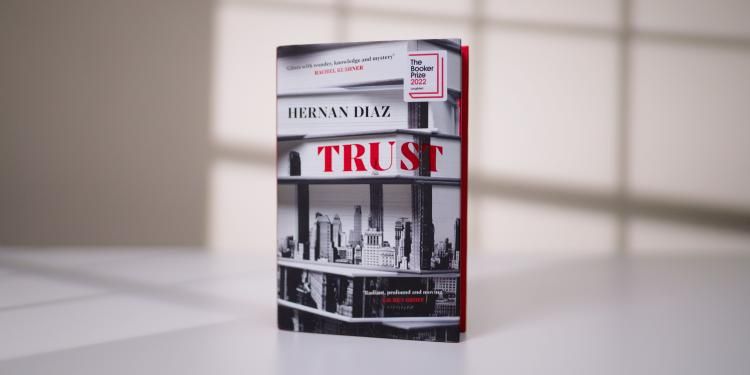 A literary puzzle about money, power, and intimacy, Trust challenges the myths shrouding wealth, and the fictions that often pass for history. Read the opening words here

He is a legendary Wall Street tycoon; she is the daughter of eccentric aristocrats. Together, they have risen to the very top - but at what cost have they acquired their immense fortune? This is the mystery at the centre of Bonds, a successful 1938 novel that all New York seems to have read. But there are other versions of this tale of privilege and deceit.

Trust elegantly draws these competing narratives into conversation with each other - and in tension with the perspective of one woman bent on disentangling fact from fiction. The result is a provocative and propulsive novel that spans an entire century and becomes more exhilarating with each new revelation.

Because he had enjoyed almost every advantage since birth, one of the few privileges denied to Benjamin Rask was that of a  heroic rise: his was not a story of resilience and perseverance or the tale of an unbreakable will forging a golden destiny for itself out of little more than dross. According to the back of the Rask family Bible, in 1662 his father’s ancestors had migrated from Copenhagen to Glasgow, where they started trading in tobacco from the Colonies. Over the next century, their business prospered and expanded to the extent that part of the family moved to America so they could better oversee their suppliers and control every aspect of production. Three generations later, Benjamin’s father, Solomon, bought out all his relatives and outside investors. Under his sole direction, the company kept flourishing, and it did not take him long to become one of the most prominent tobacco traders on the Eastern Seaboard. It may have been true that his inventory was sourced from the finest providers on the continent, but more than in the quality of his merchandise, the key to Solomon’s success lay in his ability to exploit an obvious fact: there was, of course, an epicurean side to tobacco, but most men smoked so that they could talk to other men. Solomon Rask was, therefore, a purveyor not only of the finest cigars, cigarillos, and pipe blends but also (and mostly) of excellent conversation and political connections. He rose to the pinnacle of his business and secured his place there thanks to his gregariousness and the friendships cultivated in the smoking room, where he was often seen sharing one of his figurados with some of his most distinguished customers, among whom he counted Grover Cleveland, William Zachary Irving, and John Pierpont Morgan.

At the height of his success, Solomon had a townhouse built on  West 17th Street, which was finished just in time for Benjamin’s birth. Yet Solomon was seldom to be seen at the New York family residence. His work took him from one plantation to another, and he was always supervising rolling rooms or visiting business associates in Virginia, North Carolina, and the Caribbean. He even owned a small hacienda in Cuba, where he passed the greater part of each winter. Rumors concerning his life on the island established his reputation as an adventurer with a taste for the exotic, which was an asset in his line of business.

Mrs. Wilhelmina Rask never set foot on her husband’s Cuban estate. She, too, was absent from New York for long stretches, leaving as soon as Solomon returned and staying at her friends’ summerhouses on the east bank of the Hudson or their cottages in Newport for entire seasons. The only visible thing she shared with Solomon was a passion for cigars, which she smoked compulsively. This being a very uncommon source of pleasure for a lady, she would only indulge in private, in the company of her girlfriends. But this was no impediment, since she was surrounded by them at all times. Willie, as those in her set called her, was part of a tightly knit group of women who seemed to constitute a sort of nomadic tribe. They were not only from New York but also from Washington, Philadelphia, Providence, Boston, and even as far as Chicago. They moved as a pack, visiting one another’s houses and vacation homes according to the seasons — West 17th Street became the coterie’s abode for a few months, starting in late September, when Solomon left for his hacienda. Still, no matter in what part of the country the ladies happened to dwell, the clique invariably kept to itself in an impenetrable circle.

He moved back from New England to the city and failed where most of his acquaintances thrived — he was an inept athlete, an apathetic club man, an unenthusiastic drinker, an indifferent gambler, a lukewarm lover.

Limited, for the most part, to his and his nursemaids’ rooms, Benjamin had only a vague notion of the rest of the brownstone where he grew up. When his mother and her friends were there, he was kept away from the rooms where they smoked, played cards, and drank  Sauternes well into the night; when they were gone, the main floors became a dim succession of shuttered windows, covered furniture, and chandeliers in ballooning shrouds. All of his nurses and governesses said he was a model child, and all of his tutors confirmed it. Manners,  intelligence, and obedience had never been combined as harmoniously as in this sweet-tempered child. The only fault some of his early mentors could find after much searching was Benjamin’s reluctance to associate with other children. When one of his tutors attributed his student’s friendlessness to fear, Solomon waved his concerns away, saying the boy was just becoming a man of his own.

His lonely upbringing did not prepare him for boarding school. During the first term, he became the object of daily indignities and small cruelties. In time, however, his classmates discovered that his impassiveness made him a dissatisfying victim and left him alone. He kept to himself and excelled, dispassionately, in every subject. At the end of each year, after bestowing on him all available honors and distinctions, his teachers, without fail, would remind him that he was meant to bring much glory to the Academy.

During his senior year, his father died of heart failure. At the service, back in New York, relatives and acquaintances alike were impressed by Benjamin’s composure, but the truth was that mourning simply had given the natural dispositions of his character a socially recognizable form. In a display of great precocity that baffled his father’s attorneys and bankers, the boy requested to examine the will and all the financial statements related to it. Mr. Rask was a conscientious,  tidy man, and his son found no fault with the documents. Having concluded this business and knowing what to expect once he came of age and into possession of his inheritance, he returned to New Hampshire to finish school.

His mother spent her brief widowhood with her friends in Rhode Island. She went in May, shortly before Benjamin’s graduation, and by the end of the summer had died from emphysema. The family and friends who attended this second, much more subdued memorial barely knew how to speak to the young man orphaned in the course of a mere few months. Fortunately, there were many practical issues to discuss —  trusts, executors, and the legal challenges in settling the estate.

Benjamin’s experience as a college student was an amplified echo of his years as a schoolboy. All the same inadequacies and talents were there, but now he seemed to have acquired a cold sort of fondness for the former and a muted disdain for the latter. Some of the more salient traits of his lineage appeared to have come to an end with him. He could not have been more different from his father, who had owned every room he had walked into and made everyone in it gravitate around him, and he had nothing in common with his mother, who had probably never spent a day of her life alone. These discrepancies with his parents became even more accentuated after his graduation. He moved back from New England to the city and failed where most of his acquaintances thrived — he was an inept athlete, an apathetic club man, an unenthusiastic drinker, an indifferent gambler, a lukewarm lover. He, who owed his fortune to tobacco, did not even smoke. Those who accused him of being excessively frugal failed to understand that, in truth, he had no appetites to repress.

The tobacco business could not have interested Benjamin less. He disliked both the product — the primitive sucking and puffing, the savage fascination with smoke, the bittersweet stench of rotten leaves —  and the congeniality around it, which his father had enjoyed so much and exploited so well. Nothing disgusted him more than the misty complicities of the smoking room. Despite his most honest efforts, he could not argue, with any semblance of passion, for the virtue of a lonsdale over a diadema, and he was unable to sing, with the vigor that only firsthand knowledge can impart, the praise of the robustos from his Vuelta Abajo estate. Plantations, curing barns, and cigar factories belonged to a remote world he had no interest in getting to know. He would have been the first to admit he was an appalling ambassador for the company and therefore delegated daily operations to the manager who had served under his father for two faithful decades. It was against the advice of this manager that Benjamin, through agents he never met in person, undersold his father’s Cuban hacienda and every thing in it, without even taking an inventory. His banker invested the money in the stock market, together with the rest of his savings. A few stagnant years went by, during which he made halfhearted attempts at starting different collections (coins, china, friends), dabbled in hypochondria, tried to develop an enthusiasm for horses, and failed to become a dandy. Time became a constant itch.

Against his true inclinations, he started planning a trip to Europe. All that interested him about the Old Continent he had already learned through books; experiencing those things and places was of no importance to him. And he did not look forward to being confined on a ship with strangers for days on end. Still, he told himself that if he ever would leave, this would be the proper moment: the general atmosphere in New York City was rather glum as the result of a series of financial crises and the ensuing economic recession that had engulfed the country for the last two years. Because the downturn did not affect him directly, Benjamin was only vaguely aware of its causes — it had all started, he believed, with the burst of the railroad bubble, somehow linked to a subsequent silver crash, leading, in turn, to a run on gold,  which, in the end, resulted in numerous bank failures in what came to be known as the Panic of 1893. Whatever the actual chain of events might have been, he was not worried. He had a general notion that markets swung back and forth and was confident that today’s losses would be tomorrow’s gains. Rather than discouraging his European excursion, the financial crisis — the worst since the Long Depression, two decades earlier— was among the strongest encouragements he found to leave.

Trust by Hernan Diaz is published by Picador, £16.99

Well done to Hernan Diaz for being longlisted for the #BookerPrize2022 with ‘Trust’.

With Trust longlisted for the Booker Prize 2022, we spoke to Hernan Diaz about tackling the taboo of money, why he writes with a fountain pen and his love of Borges