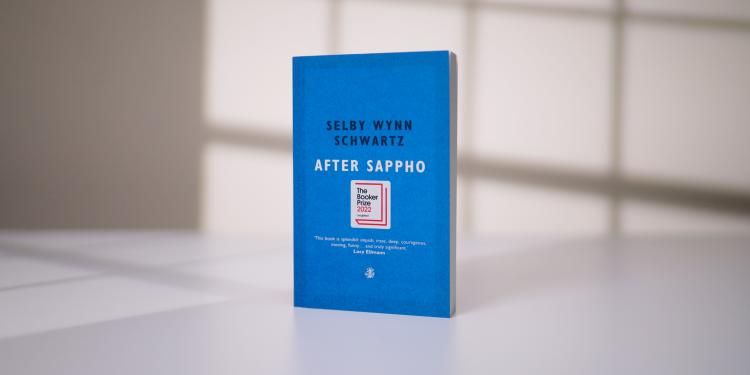 After Sappho is a joyous reimagining of the lives of a brilliant group of feminists, sapphists, artists and writers from the past, as they battle for control over their lives, for liberation and for justice. Read the opening two chapters here

Told in a series of cascading vignettes, featuring a multitude of voices, After Sappho hails the female torchbearers of the late 19th and early 20th century.

Sarah Bernhardt, Colette, Eleanora Duse, Lina Poletti, Josephine Baker, Virginia Woolf… these are just a few of the women sharing the pages of a novel as fierce as it is luminous. Lush and poetic, furious and funny - in After Sappho, longlisted for the Booker Prize 2022, Selby Wynn Schwartz has created a work that celebrates the women and trailblazers of the past - and also offers hope for our present, and our futures.

The first thing we did was change our names. We were going to be Sappho.

Who was Sappho? No one knew, but she had an island. She was garlanded with girls. She could sit down to dine and look straight at the woman she loved, however unhappily. When she sang, everyone said, it was like evening on a riverbank, sinking down into the moss with the sky pouring over you. All of her poems were songs.

We read Sappho at school, in classes intended merely to teach poetic metre. Very few of our teachers imagined that they were swelling our veins with cassia and myrrh. In dry voices they went on about the aorist tense, while inside ourselves we felt the leaves of trees shivering in the light, everything dappled, everything trembling.

We were so young then that we had never met. In back gardens we read as much as we could, staining our dresses with mud and pine-pitch. Some of us were sent by our families to distant schools to be finished, so that we would come to our proper end. But it was not our end. It was barely our beginning. Each one lingered in her own place, searching the fragments of poems for words to say what it was, this feeling that Sappho calls aithussomenon, the way that leaves move when nothing touches them but the afternoon light.

At that time we were not called anything and so we cherished every word, no matter how many centuries dead. Reading of the nocturnal rites of the pannuchides we stayed up all night; the exile of Sappho to Sicily turned our eyes to the sea. We began writing odes to clover blossoms and blushing apples, or painting on canvases that we turned to the wall at the slightest sound of footsteps. A sidelong glance, a half-smile, a hand that rested on our arms just above the elbow: we had not yet memorized the lines for these occasions. Or there were only fragments of lines that we could have offered, in any case. Of the nine books of poems written by Sappho, mere shreds of dactyls survive, as in Fragment 24C: we live/…the opposite/…daring.

At her christening she kicked free of the blankets bundled around her and crawled down the nave. It was impossible to swaddle Cordula long enough to name her.

Cordula Poletti was born into a line of sisters who didn’t understand her. From the earliest days, she was drawn towards the outer reaches of the house: the attic, the balcony, the back window touched by the branches of a pine tree. At her christening she kicked free of the blankets bundled around her and crawled down the nave. It was impossible to swaddle Cordula long enough to name her.

Whenever she could, she took a Latin primer from the Biblioteca Classense and went to sit in a tree near the cemetery. In her house they called, Cordula, Cordula!, and no one would answer. Finding Cordula’s skirts discarded on the floor, her mother openly despaired of her prospects. What right-minded citizen of Ravenna would marry a girl who climbed up the trees in her underthings? Her mother called, Cordula, Cordula?, but there was no one in the house who would answer that question.

Two years before the christening of Cordula, Guglielmo Cantarano published his study of X, a twenty-three-year-old Italian. In excellent health, X went whistling through the streets and kept a string of girlfriends happy. Even Cantarano, who disapproved, had to admit that X was jovial and generous. X would throw a shoulder to a wheel without complaint, could make a room roar with laughter. It wasn’t that. It was what X was not. X was not a willing housewife. X remained unmoved by squalling infants, would not wear skirts that swaddled the stride, had no desire to be pursued by the hot breath of young men, failed to enjoy domestic chores, and possessed none of the decorous modesty of maidenhood. Whatever X was, Cantarano wrote, it was to be avoided at all costs.

Thus X was locked away in an asylum and Italian mothers were instructed to watch for signs of deviance in their daughters. Even those who had normal breasts, Cantarano cautioned, might turn out to be like X, whose apparently standard genitals had not prevented the attempt, late one night, to set the family home on fire.

She shut the insistent voices of her family inside the house and went up her tree. From a haven of leaves she looked out over the cemetery. The tombs of poets were wreathed in laurel and etched in glorious verses, while the graves of the ordinary listed as their only accomplishments the names of children produced or a spouse bereaved. So many dead in childbirth, she observed, and so few by shipwreck.

Her mind was a tangle of lyric odes and unconjugated verbs. Each line of Ovid demanded an unspooling of which object bore the action, and by whose brave hand. Each epithet traced to its source showed the divine moving behind the scenes of human life: in her tree was a great rustling of gods, owls, winged serpents. As soon as she finished the Latin primer she went on to the Greek. She stayed up late, rapturously late. It became apparent that she wasn’t Cordula at all.

Sappho writes of many girls: those who are pliant and bind up their hair modestly, those who are golden and go willingly into the bridal chamber, and those like the hyacinth in the mountains that shepherd men/with their feet trample down.

Towards the end of the century she changed names. Cordula sounded anyway like a heap of rope. Lina was a swift, sleek line, a hand brushing a row of buttons. Lina was the one who would read Sappho.

Lina lived with her family on Via Rattazzi, not far from the tomb of Dante. A tomb is a dead place in the ground. There is a rock on top of it, covered with tiny nicks that are words. Lina stayed up late writing verses for the tomb. Not for Dante himself, who had been dead since 1321, but for the incisions that words make on immutable substances.

It would be many years before we learned of Lina Poletti. In her childhood she dwelt alone, her only companions the solemn constellations of the night sky. The refrain rang through her house, Cordula, Cordula!, but Lina listened only to the silence of stars. Eventually she would learn to translate Sappho without a dictionary. She would find that she was one of us. But in those years it was a great wonder that Lina, unlike X, did not set fire to the family home.

As the century turned, Lina Poletti outpaced her classmates in classical subjects from elocution to the elegiac mode. Moreover she kept her distance when they paired off to walk home or passed each other scraps of crude rhymes. Lina walked alone to the Biblioteca Classense and noted various uses of the genitive.

The genitive is a case of relations between nouns. Often the genitive is defined as possession, as if the only way one noun could be with another were to own it, greedily. But in fact there is also the genitive of remembering, where one noun is always thinking of another, refusing to forget her.

For the girl who wishes to avoid being trampled down by the feet of men, Sappho recommends the farthermost branch of the highest tree. There are always those rare few, Sappho notes, that the applepickers forgot—/no, not forgot: were unable to reach.

Lina’s father made his living selling earthenware pots. With four daughters to maintain, he saw the necessity of their marriages like the exchange of dry goods. A line of daughters was already a liability, and there was no market for girls who were not pliant.

Whenever Lina’s mother called her, Cordula, Cordula!, to embroider the trousseau of linens for her dowry, Lina was already elsewhere. She was at the very end of the Greek primer, she was ensconced in a far corner of the Biblioteca Classense, she had gone out of the back window and into the pine tree to read poems from a century less muffled in fabric.

We could picture Lina in those years: her high buttoned boots, her erudite citations. Above her boots she seemed hardly to be wearing skirts. Lina Poletti was like that, she could make visible things seem scant and unremarkable. She had her own ways of escaping the century.

Overjoyed to say that Selby Wynn Schwartz is on the Booker Prize longlist - and with so many other brilliant authors and novels! We’re delighted that many more people will get to encounter After Sappho; and huge thanks to the judges…#bookerprize2022 https://t.co/1kR8ulDmy3

A kletic poem is a calling, both a hymn and a plea. It bends in obeisance to the divine, ever dappled and shining, and at the same time it calls out to ask, When will you arrive? Why is your radiance distant from my eyes? You drop through the branches when I sleep at the roots. You pour yourself out like the light of an afternoon and yet somewhere you linger, outside the day.

It is while invoking the one who abides and yet must be called, urgently, from a great distance, that Sappho writes of aithussomenon, the bright trembling of leaves in the moment of anticipation. A poet is always living in kletic time, whatever her century. She is calling out, she is waiting. She lies down in the shade of the future and drowses among its roots. Her case is the genitive of remembering.

Lina Poletti fought to sit in a chair at the library. She fought to smoke in the Caffè Roma-Risorgimento. She fought to frequent literary gatherings in the evenings. She did up her cravat with determined fingers and presented herself in public, over and over, to murmurs in Piazza Vittorio Emanuele II.

She went on, against the wishes of her family, to the university in Bologna. She studied under the esteemed poet Giovanni Pascoli, who was surprised to find her there. He peered at her, although she was sitting clearly in the front row of the lecture hall with her pen ready. There weren’t many women who wanted to write a thesis on the poetry of Carducci. People were always saying that about Lina Poletti: they were surprised to find her, there weren’t many like her. It was true that she had very striking eyes, with golden rims around her pupils. She seemed volatile, alchemical. Something might flash through her and change everything. As Sibilla Aleramo would say to us later, Lina was a violent, luminous wave.

After Sappho by Selby Wynn Schwartz is published by Galley Beggar Press, £9.99