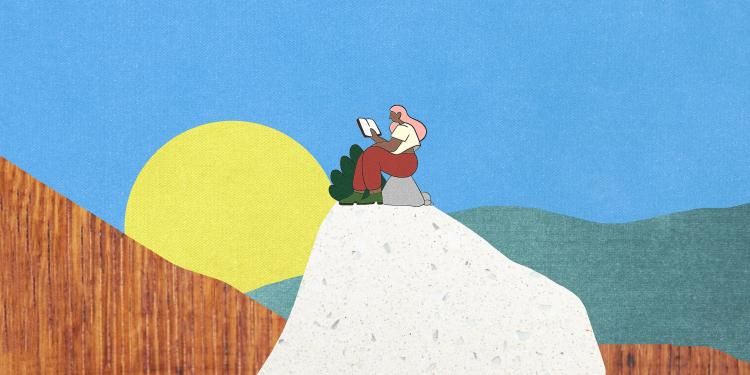 From life-changing decisions to existential meditations, these books will gently ease you into 2023 and help you turn over a new leaf

As the curtain falls on one year and we cross the threshold into another, those slow weeks of January allow us a period of reflection - a time when we can consider new beginnings and a personal reset.

So as we look forward to 2023, we’ve compiled a list of books, all of which have been nominated for the Booker and International Booker Prizes, that will inspire you to turn over a new leaf (literary pun intended), from illuminating debuts to deeply introspective masterpieces, whatever your resolution.

Jon Fosse began writing his Septology trilogy (or slightly more precisely, his collection of seven stories split across three volumes) because he felt he had ‘something crucial to say’, he told the Booker Prize website when he was shortlisted for the International Prize in 2022 for the third installment, A New Name: Septology VI-VII. He was previously longlisted for the first instalment, The Other Name: Septology I - II in 2020.  Best described as a metaphysical journey that explores the human condition, this extensive body of work details the intersecting lives of a group of people in his homeland of Norway. It’s deeply existential and questions the true meaning of a life well lived, through love, faith and death. Written in Fosse’s unique ‘slow prose’ style that has bought him legions of devoted fans - the Septology trilogy is poetic, repetitive, and at times, hypnotic.

Tomb of Sand by Geetanjali Shree, translated by Daisy Rockwell

For the literary embodiment of the saying ‘new year, new you’, we give an emphatic nod in the direction of Geetanjali Shree’s 2022 International Booker Prize-winning novel Tomb of Sand. A 739-page tour de force, it follows an octogenarian, ‘Ma’, bound in a deep depression over her husband’s recent death. But Ma doesn’t give up that easily and emerges, butterfly-like, with a brand new lease of life, ready to take on the world. And so, the unlikely protagonist sets off on a road-tripping adventure of a lifetime, to address the ghosts of her teenage past. Shree’s affecting novel is bursting with wordplay and humour and quietly explores identity alongside the borders that surround us every day, showing how they can be overcome.

The Unlikely Pilgrimage of Harold Fry by Rachel Joyce

Another journey of renewal and self-discovery takes place in Rachel Joyce’s 2012 longlisted novel, The Unlikely Pilgrimage of Harold Fry. Harold Fry has lived a distinctly average life. When he hears an old friend of his is gravely ill, something snaps, and the simple act of posting a letter turns into a voyage far more epic, taking him on a transformative cross-country journey entirely on foot. Yet Harold’s journey is far deeper than marking miles; it’s both emotional and spiritual, as he shows how someone very ordinary can do something extraordinary. A moving read, written with compassion and humour, where one person comes to terms with a lifetime of missteps and mistakes.

A Little Life by Hanya Yanagihara

A story of four college friends in New York City, Hanya Yanagihara’s novel became a multi-million bestseller after it was shortlisted for the Booker Prize in 2015. Following the group through the succeeding decades as their relationships ebb, grow and evolve, the quartet deal with love, loss, success and failure. But one member of the group, Jude, struggles more than others and Yanagihara slowly reveals a desperate childhood scarred by abuse and trauma. It’s at times a disturbing read, where Yanagihara staunchly refuses to conform to literary norms and provide any consolation, but it’s this insistence that trauma does not need to be overcome that makes her novel all the more affecting. A Little Life is a heartbreaker, but one that will reassure you every step of the way.

A Whole Life by Robert Seethaler

Shortlisted for the International Prize in 2016, Robert Seethaler’s petite novel spans a lifetime in just 160 pages. Taken in by a farming family as an orphan, Andreas grows up to be a man of few words. His entire life plays out on the mountainside, a simple and solitary existence in an Alpine village. Tenderly written and almost meditative, this spare book shows what’s universal in our existence. Seethaler has created a wholly evocative read that is an ode to an ordinary life; his delicate writing shows the beauty of the small moments that could so easily be overlooked, the fragments of which combine to make us who we are.

The Remains of the Day by Kazuo Ishiguro

Kazuo Ishiguro’s novel about the misguided loyalty of a long-serving butler captured the hearts of readers and won the 1989 Booker Prize. A portrait of a man navigating a new, post-war world, we follow Stevens on a solitary drive through the West Country as he attempts to reconnect with someone from his past, all the while reflecting on the life he has lived. It’s a depiction of a thwarted existence, which shows a man coming to terms with some hard truths, but the beauty of Ishiguro’s winning work lies in its subtlety and restraint, as he shows that the value in life lies in looking at what lies ahead, rather than behind us.

In 1984, Anita Brookner wrote a novel about a 1950s woman who was ahead of the curve. A woman who, even now, can teach us a lesson or two about how to live our best life. We meet Edith Hope, a romance novelist by trade, in a grand hotel on the misty shores of Lake Geneva, where she has been banished by friends on a ‘curious interlude’ in her life. That interlude? Simply refusing to conform to the patriarchal constraints of the era. Charmingly written and laced with the formidable Brookner’s ultra-dry humour, the novel won the Booker Prize and is a literary lesson in breaking personal shackles and embracing non-conformity.

The Sweetness of Water by Nathan Harris

Longlisted for the 2021 Booker Prize, Nathan Harris’s debut tells the story of those affected by the Emancipation Proclamation from a new perspective, during the Reconstruction period after the American Civil War. Two brothers are freed from their bonds, yet the reality of their emancipation is just as brutal as enslavement. Starving and homeless, they are helped by a white Georgian farmer who offers them work and board. But this act of human decency and kindness, in a time of deep uncertainty, causes fury within the local community. Harris’s profound tale about an unlikely allegiance breathes new life into this historical period while showing that, despite prejudices, courage can be found in the darkest of times.

Life of Pi by Yann Martel

As we start a new year, one question we often ask is ‘what makes a good life’? And it’s this question with which Yann Martel’s magical-realist novel Life of Pi concerns itself. A story in three parts, it follows Pi, the son of a zookeeper, who finds himself adrift in the ocean with a Bengal tiger… for 277 long days. When Pi is eventually rescued, his rescuers query his far-fetched account, so Pi offers an alternative narrative to satisfy them. Martel’s novel, which won the Booker in 2002, is a tale of survival, but one that queries the relativity of truth and our subjective interpretation of the world we live in, through the most extraordinary of premises. Martel writes with a vibrancy that makes his novel brim with energy while taking the reader on an open-ended spiritual journey.

The Sense of An Ending by Julian Barnes

Julian Barnes’ exquisitely written novella and 2011 Booker Prize winner follows a middle-aged man who is confronted with dark events from his past, a past which both time and memory have revised.

‘How often do we tell our own life story? How often do we adjust, embellish, make sly cuts? And the longer life goes on, the fewer are those around to challenge our account, to remind us that our life is not our life, merely the story we have told about our life. Told to others, but—mainly—to ourselves.’

As he is forced to face his legacy, he must reconsider his complicity in hurting another, as his younger self. At a mere 150 pages, Barnes’ work is a masterful exercise in both constructing and deconstructing events, while leaving it to the reader to conclude a true ‘ending’. It’s a reflective read, one that questions the subjectivity of memory and the role of regret, and ultimately shows that it’s never too late to make amends.

Summer reading special: take the Booker Prize… to a hotel

What's on my bookshelf: Damion Searls

What's on my bookshelf: Jon Fosse

Discover the shortlist: Jon Fosse, ‘I felt I had something crucial to say’

Discover the shortlist: Damion Searls, ‘Septology has one of the great dogs in literature’