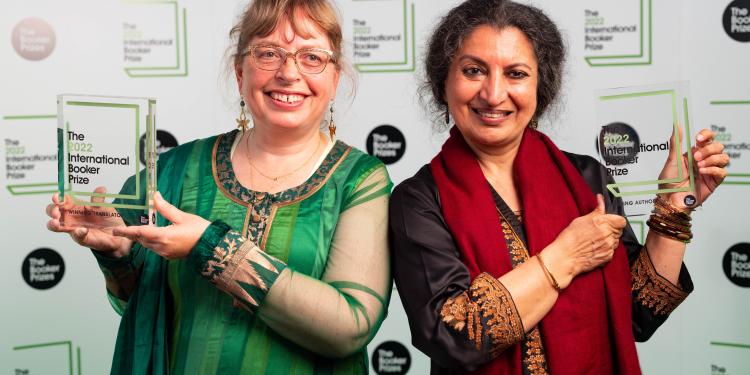 Thursday 26th May was a balmy early-summer evening and an excited crowd of authors, translators and publishers from across the world had gathered in London to celebrate the 2022 International Booker Prize; the first time the ceremony had been held in person since 2019 due to the Covid-19 pandemic.

The winner, announced late that night, was Tomb of Sand, written by Geetanjali Shree and translated by Daisy Rockwell, who equally share the prize fund of £50,000. Published as Ret Samadhi in 2018 (samadhi can mean both a place of entombment and a state of deep meditation), the novel has made history as the first book originally written in any Indian language to win the prize, and the first translated from Hindi to make the prize’s longlist or shortlist.

The product of Shree and Rockwell’s work together is, in English, a 739-page tour de force, translated from the original 384-page book in Hindi. It is a loose and digressive story, bursting with humour and wordplay, which follows an 80-year-old protagonist who emerges from a deep depression over her husband’s death with a new lease of life. To her family’s dismay, she insists on travelling to Pakistan to address the lingering trauma India’s 1947 Partition left on her as a teenager.

Frank Wynne, chair of the International Booker Prize judges, said the panel ‘were captivated by the power, the poignancy and the playfulness of Tomb of Sand’. He described it as a ‘luminous novel’ and said its ‘spellbinding brio and fierce compassion weaves youth and age, male and female, family and nation into a kaleidoscopic whole’.

On the night of the ceremony, fans from all over the globe had gathered in anticipation to watch the live stream of the ceremony. Viewers quickly commended the win, saying it would ‘open the door to more Indians to write in their regional languages’ and that it was an ‘inspiration for all Indian languages and literature’.

By the next morning, the outcome was greeted rapturously in the press, from New Dehli, where Shree lives, to Rockwell’s home state, Vermont, New England, and beyond. It resulted in over 1,000 media articles, from the New York Times to Viet Nam News to the Yorkshire Post to the Augsburger Allgemeine. Publications that had overlooked the book on publication quickly reviewed it, with the Financial Times calling it ‘a triumph of literature, but also balm and solace to anyone whose life has been scarred by a border that became a forbidding wall’, while The Guardian said the novel was ‘playful and funny, light but not slight, a carnival of characters’.

Sales of the Tomb of Sand immediately rocketed, with the English edition selling out online in the U.K. where it also topped Bookshop.org’s Indie Champions: Top 25. The book’s initial U.K. print run was 1,000 copies, while the print run ordered immediately after Tomb of Sand won the prize amounted to 15,000 copies. In India, the Hindi edition quickly took the top slot on Amazon with the English edition following at number 2, selling 35,000 copies in one week alone.

Its spellbinding brio and fierce compassion weaves youth and age, male and female, family and nation into a kaleidoscopic whole

Tilted Axis Press, Tomb of Sand’s U.K. publisher, has since ordered a substantial further print run. HarperVia, an imprint of Harper Collins dedicated to publishing extraordinary international voices, has now acquired the book for the American market. Its editor, Gretchen Schmid, described the novel as ‘a literary masterpiece unlike anything I have read before’.

Born in Mainpuri, India, in 1957, author Geetanjali Shree spent her childhood moving between towns in Uttar Pradesh. Though formally educated in English, her family and surroundings saturated her in the Hindi Language. Shree chose this as her writing language, which is unusual given many Indian writers eschew their mother tongue in favour of English, to reach a wider market. During her 35-year career, she has written five books in Hindi, though Tomb of Sand is the first to be published in English in the U.K.

Her dedication to this heritage, and her resulting Booker win, means that this could be a pivotal moment for South Asian languages and literature. And one which has now shone a spotlight on the area’s wider literary output, too. Many are excited about what’s next for Indian publishing, with Outlook India discussing ‘How Translation’s Big Break Is Coming To India’, while The Quint posited ‘Can India’s Literary Elite Look Beyond English Now?’.

Amod Maheshwari, CEO of Tomb of Sand’s Indian publisher Rajkamal Prakashan, told the National Herald India that they ‘are now in continuous production mode and 20,000 copies of the reprint are ready’ and suggested they will continue to print in response to demand. The ripple of the novel’s win has sparked an interest in other existing Hindi novels, Maheshwari confirmed, adding that ‘excellent writing in Hindi and other Indian languages is rapidly attracting the attention of a global audience’.

And it wasn’t just the publishing industry that was celebrating. Amul, a butter brand and household name in India, shared a delightful ode to Shree and Rockwell on its Twitter channel to 345k followers, with its fans claiming Tomb of Sand’s Booker win a ‘matter of pride for India’.

When Shree was asked for a few words on her win, she used the opportunity to give a decided nod to the existing canon of work from her region, a lineage to which she clearly feels indebted. ‘Behind me and this book lies a rich and flourishing literary tradition in Hindi, and in other South Asian languages,’ she said. ‘World literature will be the richer for knowing some of the finest writers in these languages,’ Shree concluded.

Tomb of Sand in numbers

Years, the length of time Geetanjali Shree has been a writer

The total number of novels Geetanjali Shree has published in Hindi

The age Daisy Rockwell’s was when she started studying Hindi

The number of languages Daisy Rockwell has studied

Watch the full ceremony for the 2022 International Booker Prize.

‘Tomb of Sand was very difficult to translate into English because of all the wordplay, puns and alliteration.’