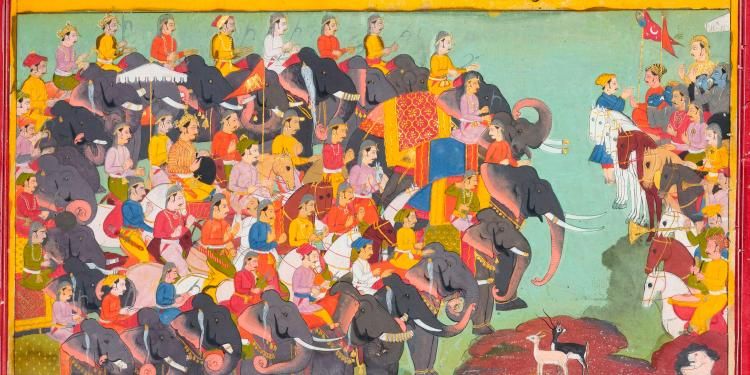 The writer of the first Hindi book on the International Booker Prize list reveals the books that have inspired her career.

From works that document the aftermath of colonialism to a Nobel Prize-winner, here’s what’s on Geetanjali Shree’s bookshelf.

Born in Mainpuri, India, in 1957, Geetanjali Shree spent her childhood moving between towns in the Uttar Pradesh. She was educated in English, but Shree’s family and surroundings saturated her in the Hindi Language. And so, it was natural for her to begin to write in it, too.

Now, the author of three novels and many short story collections has made history with the first Hindi-language novel to earn a spot on the prize. Her shortlisted book, Tomb of Sand, is an urgent yet engaging protest against the destructive impact of borders. Shree is passionate about creating a global worldview through translation and literature, “there is a vast world of literature with rich lineages which still needs to be discovered”, she says.

To celebrate her place on the list, she shared some of the most formative books on her shelves with us; those that have inspired and shaped her as a writer.

The Mahabharata, attributed to sage Vyasa, leaves nothing unexplored about the human condition. Ostensibly it is about bickering between brothers which conflagrates into the big war which destroys them all. Within the frame of that fratricidal conflict, this ancient epic depicts the inconceivable depths to which humans can descend and also the equally inconceivable heights that humans can attain. Employing a vast repertoire of narrative strategies that range from utterly playful to deeply philosophical, it encapsulates in its pages the sweep and the depth of life per se. It delights but also despairs. Humans refuse to learn from experience and repeat the same disasters – mahabharatas – century after century.

Gao Xingjian’s long languid meditation, Soul Mountain, ventures out on an exploration of the mythical soul mountain. It moves at an incredibly slow pace, bringing time to a virtual standstill, focusing with complete concentration on a particular place and moment in time. To tell the story of myth or history or love or loss, enriching our understanding of human life and the world around us. I meander on with it in my own exploration for the true – and mythical – soul mountain.

Seeing through the euphoria of the early years of Indian independence, Phanishwar Nath ‘Renu’ came out with his Maila Anchal. (Translated into English as Soiled Border by Indira Junghare.) While the others celebrated, ‘Renu’ mourned the betrayal of the ideals that had animated the freedom struggle. He had the eye and the sensitivity to see that free India was already soiled. He presaged the widespread disenchantment that would in the course of the following decades overtake the country. I would rather have something of that eye and that sensitivity.

Chinua Achebe’s Things Fall Apart portrays the pathos of a people’s subjugation. It brings us uncomfortably close to the everyday sorrows of those suddenly condemned to loss of freedom, dignity, self-worth, and erosion of social cohesion. Achebe makes us experience a human tragedy that, like many similar tragedies the world over, was wrought by the twin cataclysmic forces of colonialism and Christian proselytising.

Intizar Hussain’s little masterpiece is a complex, melancholy narrative of the meaning and fate of a new nation – Pakistan – and its people. Situated in the moment of the nation’s violent vivisection in 1971 – the moment of the birth of Bangladesh – the narrative’s perspective comes from its young protagonist. A tragic and paradoxical figure struggling ineffectually to get out of the maelstrom around him, the protagonist becomes a metaphor for his people.

Rabindranath Tagore came out with his eponymous novel, Gora, in the first decade of the last century. Though confined to Calcutta at the turn of the century, the novel offers a pulsating account of renascent subject India struggling through antagonistic forces. The protagonist Gora searches for his true identity believing at the start, that he is the heir of a pristine pure Hindu tradition. But he realises there is nothing narrowly pure in tradition and his self-searching ends in forces of love and amity trumping narrow sectarianism. The novel is a dream Tagore so long ago dreamt for India and for humankind. The dream in the intervening century and more has remained but a dream.