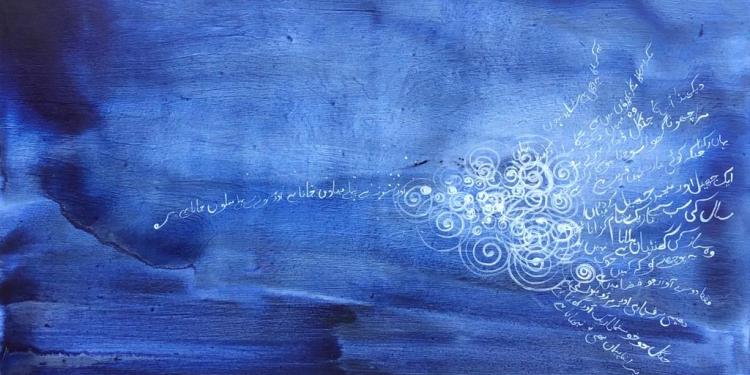 The linguist tells us about the books that have shaped her formidable career.

From a well-thumbed dictionary to a novel by one of the most influential Hindi authors of the 20th century, here’s what’s on Daisy Rockwell’s bookshelf.

Creativity is in Daisy Rockwell’s blood. The writer, translator and painter (including the painting above) grew up in a family of artists in western Massachusetts, with her love of languages beginning as a child when she learned Latin aged twelve. She went on to study Hindi, French, Latin, ancient Greek, and German.

Rockwell has quietly built an impressive body of work in Hindi and Urdu literature and has translated a number of classic works. Her 2019 translation of Krishna Sobti’s A Gujarat Here, a Gujarat There was awarded the Modern Language Association’s Aldo and Jeanne Scaglione Translation Prize. For Rockwell, her translations have always been a deeply creative piece of work, which she strives to take far “beyond a mechanical reproduction of words and sentences”.

It’s her translation of Geetanjali Shree’s 2019 novel Tomb of Sand which is shortlisted for the 2022 International Booker Prize. The novel – an urgent yet engaging protest against the destructive impact of borders – is the first Hindi novel ever to make the list. To celebrate, Rockwell shared a selection of books that have shaped her formidable career and inspired her along the way.

Speaking of Shiva translated by A. K. Ramanujan

A.K. Ramanujan’s path-breaking 1973 collection of translations from Kannada of the works of four medieval Saivite saints was a revelation to me when I first read it in college, circa 1990. Ramanujan demonstrated through this work the infinite possibility of translation and the impossibility of untranslatability. I later had the good fortune to take a translation seminar with him before his untimely death in 1992, and that experience, coupled with this book, served as a guiding light to me in my translation practice.

Because a translator is nothing without her dictionaries. In my second year of graduate school, in 1993, R. S. McGregor’s Hindi-English dictionary was published. It was a game-changer! McGregor painstakingly sifted through many previous dictionaries to create for the first time a reliable modern dictionary of the Hindi language. I still have my first hardback copy – it’s falling to bits and the writing has worn off the spine. A friend once saw it lying on a table in my house and asked if it was the Bible. Yes.

This 1993 linguistic study might seem an odd choice, but the author was my mentor in graduate school, my first Hindi teacher, and the man who urged me to take up translation. Masica’s encyclopedic knowledge of Indian languages, and many more languages beyond the borders of South Asia, taught me how to understand the polyphonic, ever-expanding nature of the Hindi language, which, sadly, cannot be tidily contained in any one dictionary, not even R. S. McGregor’s.

I wrote my dissertation about Ashk’s seven-volume cycle of novels, a series with a Proustian attachment to detail and reconstructed memories. Published in 1947, Falling Walls is the first volume in the series which Ashk would spend the rest of his life nearly completing. The series is richly observed and covers five years in the life of the protagonist, an impoverished young Punjabi man struggling to find his way as a writer. I spent many years living with the novel, reading it, then writing about it, and finally translating it. Throughout that time, the novel – and Ashk – taught me a great deal about what it means to be an artist and live a creative life.

A Gujarat Here, a Gujarat There by Krishna Sobti, translated by Daisy Rockwell

Krishna Sobti (1925-2019) was one of the most influential Hindi authors of the 20th century. A feminist and experimentalist, she has inspired and influenced many prominent writers, including Geetanjali Shree. I had the good fortune to meet her several times and translate her last novel, which sadly came out shortly after her death. A Gujarat Here, a Gujarat There is a fictionalised memoir of Sobti’s time spent as the governess of a five-year-old maharaja just after Indian independence. It taught me a great deal about translating experimental, poetic writing, how to be an optimistic feminist, and so much more.