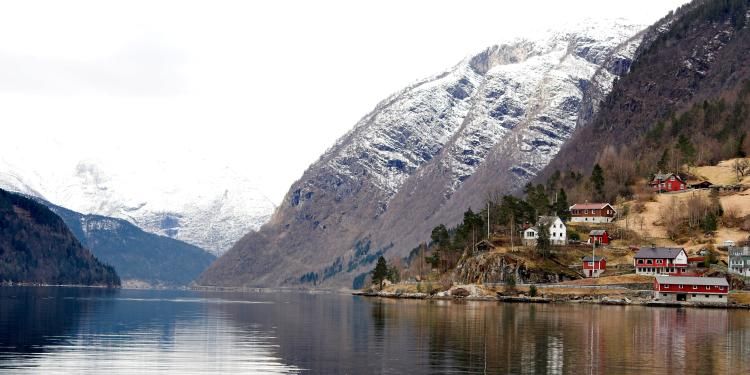 What's on my bookshelf: Jon Fosse

The critically-acclaimed writer reveals the books that shaped his life.

From Norwegian poetry to a classic that changed the way we looked at the world, here’s what’s on Jon Fosse’s bookshelf.

Jon Fosse is one of Norway’s most celebrated writers. Born in 1959, he grew up on a small farm on the west coast of the country. He studied literature at the University of Bergen, after which he became a full-time writer, journalist and teacher.

Through Fosse’s career emerged a prolific writer. His body of work is far-reaching and extensive – his pen stretches to novels, poetry, essays, plays and even children’s books. As a playwright alone, his catalogue has seen more than one thousand productions all around the world, spanning fifty languages, to international acclaim.

It’s no wonder Le Monde called him “the Beckett of the twenty-first century”. Now, he’s made the International Booker Prize list for the second time, this year taking a spot on the shortlist for the third and final instalment in his Septology trilogy, A New Name: Septology VI-VII. To celebrate, we asked him about the books that have made an impact on him. Here are the books that have shaped his life.

In the village Ulvik, not far from where I grew up, the poet Olav H. Hauge lived. He is considered one of the major Norwegian poets. I read his poetry in my teens, and some of his poems resonated deeply with me. Hauge was born fifty years before me. He became an old man, and in his later years I met with him now and then, and he sent me some hand-written letters. They are now among my most precious belongings.

Hauge was a poet, but also a translator. His collected translations of poems from English, German and French have been published over and over again in Norway. I read these translations in my teens. What impressed me the most was his translations of German poetry. Hölderlin, Paul Celan and especially Georg Trakl. When I was quite young, I got hold of Trakel’s Collected Poems in German. They made an everlasting impression on me and perhaps the most impactful was his major collection, Sebastian in Dream. Some years ago, I translated that collection into Norwegian. Trakl’s poetry doesn’t translate that well into English, but his poetry is still available in various English translations.

The Trial by Franz Kafka

Another writer writing in German around the same time as when Trakl wrote his poetry was Franz Kafka. His most famous, and best novel, is The Trial. I also read this as a young man, and this novel, and the writing of Kafka in general, remains the literature that has impressed me the most. My own translation of The Trial was published in Norway recently. I have also translated a selection of his stories, that may well be the best he wrote. Kafka changed the way we look at the world, and in so doing, changed the world.

The Sound and the Fury by William Faulkner

It is still the books that I read when I was rather young that have made the biggest impact on me, and one of them is The Sound and the Fury. It was a difficult book to read, and I spent a lot of time reading and trying to understand it. In various ways, this novel made an everlasting impression on me, and it is still one of those reading experiences present in me all the time.

I first saw Beckett’s work written for the stage in a production of three of his shorter plays in Oslo. At that time I hadn’t seen much theatre, and I can remember that evening clearly. From then on, Beckett’s have stayed with me. Of course, I admire his major plays, like Waiting for Godot, but I still think his later, shorter plays are the most impressive.

In my early twenties, I read several of the major modernist novelists. And I fell in love with the novels of Virginia Woolf. The first I read was Mrs Dalloway. To me, it felt like she just throws the words out and each and every one fell exactly, precisely, where they should in a graceful movement as the most beautiful literary music you could ask for. My understanding of literature was another after I read this novel.

I cannot possibly make such a list without mentioning The Book of Books, the Bible.  A couple of decades ago I was asked to write a new translation of the Bible in Norwegian. To try to get as close to the original texts as possible – often translations of the Bible translate an interpretation of the meaning rather than what is actually written – they wanted to include writers in the translation process that worked closely together with experts. For eleven years I worked on translating the prophets, so I have written through almost the whole Prophetic Literature. This must have influenced my own writing in some way, even if I don’t know it.

Jon Fosse delivers both a transcendent exploration of the human condition and a radically ‘other’ reading experience - incantatory, hypnotic, and utterly unique. Translated by Damion Searls.

What's on my bookshelf: Damion Searls

Discover the shortlist: Jon Fosse, ‘I felt I had something crucial to say’

Discover the shortlist: Damion Searls, ‘Septology has one of the great dogs in literature’