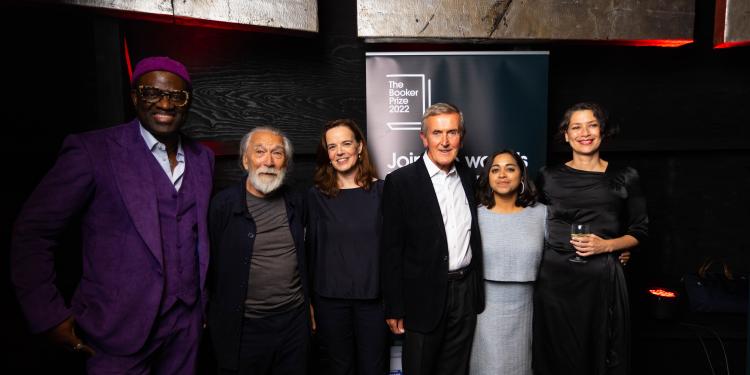 What it's really like to be a Booker Prize judge

In this video we peer inside the 2022 judging room, where this year’s cohort reflect on the challenges, surprises and most enjoyable aspects of reading for the Booker Prize

Almost 170 books across seven months. It works out as roughly a novel a day. Sounds like an impossible task, doesn’t it? Or, quite simply, the job description of a Booker Prize judge.

Each prize year, a new cohort of five individuals is selected to judge the prize. Gaby Wood, Director of the Booker Prize Foundation told us what makes a Booker Prize judge: ‘Essentially what you’re looking for is people that are going to read on behalf of the general public, but not second guess them’. ‘It’s less to do with individual judges than it is to do with the combination of judges, and that’s where the alchemy comes in,’ she added.

But even for a seasoned reader, tackling such a significant volume of books is a daunting task. ‘My gosh – nobody does that!’ thought novelist, poet and professor Alain Mabanckou, when he heard of the mission that lay ahead. ‘The most challenging part of reading 170 books for the Booker Prize is reading 170 books, it turns out,’ laughed academic and broadcaster Shahida Bari.

Over the years, the judging panels have been culturally rich and reflected a broad range of critical backgrounds. Wood looks for judges ‘with different tastes’ and ‘diversity in the broadest sense’ to ensure each book ‘finds its ideal reader on the panel’. Previous prize years have featured publishers and professors, poets and peers, actors and authors, critics, comedians and even members of the clergy: think Margaret Busby, Maya Jasanoff, Lemn Sissay, Lola Young, Joanna Lumley, Hilary Mantel, Frank Kermode, Sue Perkins and Rowan Williams, to name but a few.

Throughout the process, the judges meet once a month, from January to July, often discussing up to 30 books at a time. And while the judging room is often serious and contemplative, a place of debates – dare we say, occasionally heated – it is also a place where the judges connect with each other, reader to reader.  ‘Right from day one, we immediately found a way to laugh with each other,’ said historian Helen Castor.

Novelist M. John Harrison recalled that when the judges’ discussions took place via Zoom, his partner would call upstairs to say, ‘What are you doing up there? I thought you were in a judges’ meeting and all I can hear is laughter’.

This shared experience of reading together allowed for new perspectives to emerge. One of the biggest joys of the process, said cultural historian and broadcaster Neil MacGregor, Chair of the 2022 judges, ‘has been working with people who come to the discussion wanting to have their opinions changed’. For Bari, finding connections with the other judges provided inspiration. ‘Each of us lends something to each other’s reading - we end up in unexpected places when we read books together like this’. This part of the process is ‘magical to witness’, said Wood.

The longlisting and shortlisting of the Booker Prize means that ‘unlike any other prize, the winner has been read three times in nine months by five people’, Wood explained. Which means picking a winner is often an emotionally-charged decision. Castor said, ‘Through laughter and sometimes tears, there have been really emotional moments in response to these books’.

But what the judges look for in a prize winner is simpler than you might think. ‘We’ve been looking for books we’d like to recommend to friends,’ MacGregor revealed. For Wood, the judging process is a stress test for each book. ‘What you’re trying to do is accelerate the actual effect of the Booker, which is to become a classic.’ she said.

The judges for the Booker Prize 2022 are announced today, 11 January. Publishers are also now invited to submit their books for the 2022 prize.