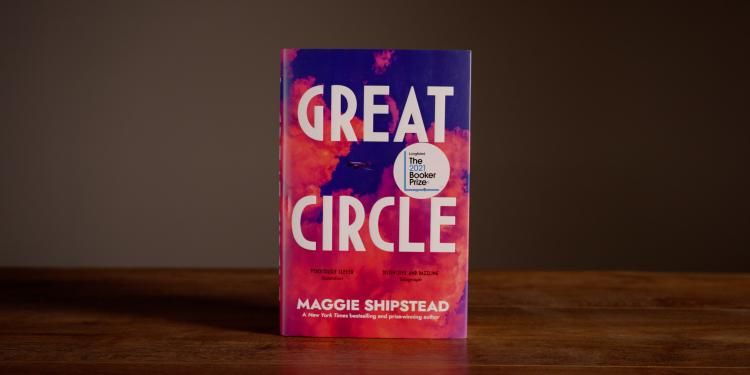 Maggie Shipstead speaks to us about the largest structural challenge of writing her Booker Prize-longlisted Great Circle, and why she prefers to keep her influences private.

How does it feel to have Great Circle longlisted for the Booker?

I’m not sure there’s a fresh way to describe it! I’m thrilled, honoured, gobsmacked.

Probably everything I’ve read starting from childhood has gone into the stew in one way or another, but – with apologies! – I don’t like to list influences because they feel oddly private to me. I think part of my reluctance is that I don’t want to be presumptuous about lumping myself in with the authors I most admire.

I love so many of them: The Beggar Maid, The Remains of the Day, On Beauty, A Tale for the Time Being, Atonement, The Luminaries, just to scratch the surface. But the one I have the deepest (and most complicated) friendship with is Possession by A.S.Byatt.

I have a collection of short stories coming out next summer, and after that there will be another novel, which hopefully (for my own sake) will have a somewhat smaller scope than Great Circle.

Your book has an epic scope and is packed with dramatic events. How did you plan it, and what was it like seeing it take shape?

I’m sadly incapable of planning my books. I wish I could, but instead I just have to leap and then hope I’m able to resolve all the problems I create. For much of the time I was drafting Great Circle, I wasn’t sure how I would pull everything together, so there was some blind faith and dogged persistence involved.

When did you become interested in female aviators and how did you research the character of Marian Graves?

The first seed of Great Circle was planted when I saw a statue of the pilot Jean Batten (the first person to fly solo from England to New Zealand in 1936) at the Auckland airport in 2012. I’d been casting about for a book idea, and I felt a strong sense of recognition that this – a female pilot – was what I had to write about. Mostly I researched by reading, but I also traveled to some very remote places, usually on magazine assignments, because I wanted to see what Marian saw. And I went to an archive at Stanford University to read the personal papers of several American women who, like Marian, flew in the Air Transport Auxiliary in the UK during the Second World War.

In more ways than one, Hadley Baxter - the Hollywood starlet who plays Marian - conveys a sense of loss. Were there points at which you were surprised by what the twin narratives revealed in one another?

Yes, absolutely. The first Hadley section that I wrote came out of the blue one day and had no ostensible connection to the aviatrix book I’d just started working on, but I had a gut feeling that this modern, prickly, first person voice was the missing, essential element of the novel. One of the largest structural challenges of writing Great Circle was binding the two narratives together in a way I found satisfying but not too pat, but it was also always a relief to shift into Hadley’s point of view. I had a sense of playfulness when I was writing her.

By
Maggie Shipstead
Published by
Transworld

Maggie Shipstead on A Tale for the Time Being