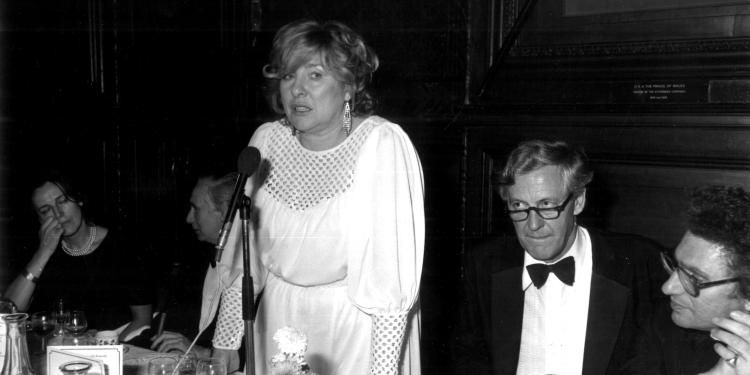 As Chair of the 1983 Booker Prize judges, Fay Weldon had been expected to make a speech celebrating the year’s best fiction. Instead, she delivered a devastating attack on the publishing industry

1983 marked the 15th year of the Booker Prize. In its short existence, the prize had already cemented its status as the most important literary award in the English-speaking world. That year, on Wednesday October 26, the ceremony was held in the Stationers’ Hall, an imposing Grade I listed, 17th century building near St Paul’s Cathedral in London. The shortlist including some of the biggest names in contemporary literature: Salman Rushdie, Graham Swift, John Fuller, Anita Mason, Malcolm Bradbury and J.M. Coetzee had made it to this grand finale.

Under normal circumstances, one might have expected a night of congratulation and polite conversation as the who’s who of the publishing world gathered to praise the year’s best works. But this particular ceremony turned into one of the most explosive in Booker history - a night of tiffs, tantrums and monumental tellings-off.

That year, the judging panel consisted of five literary giants - the authors Fay Weldon and Angela Carter, editor Terence Kilmartin, poet Peter Porter and broadcaster Libby Purves. With Weldon as Chair, it was a historic moment - the first time in the prize’s history a woman had been selected to lead the panel.

As a writer, Weldon, who has died aged 91, had been shortlisted for the prize in 1979 for Praxis, her portrayal of the shifting roles and personalities of one woman journeying from childhood to adulthood. A self-described ‘militant feminist’, her work often focused on the lives and relationships of women, drawing from her own experiences in over 30 novels published throughout her career. Weldon also had numerous TV and radio credits to her name and co-wrote the first episode of the period drama Upstairs, Downstairs. In 1983, she published one of her best-known works, The Life and Loves of a She-Devil, which would become a hit TV series three years later.

To the publishers, I would say this. We are the raw material of your trade. You do tend to forget it, you know. You forget that books need writers

The judges that year awarded the prize to Coetzee’s Life and Times of Michael K. Coetzee had declined to attend the event, citing his shyness and asked ‘to be excused the ordeal of travelling the 8,000 miles to the venue’ from his native South Africa. Considering the drama that was about to unfold, Coetzee might have wished he’d made the journey after all.

When quizzed during the evening, Weldon said the shortlist contained a ‘terrific’ set of books, and joked how tricky it had been to make such an important decision without her ‘husband here to help decide’, in what was intended as a mischievous nod to her feminist roots. However, she later reflected that ‘one should never make jokes in the presence of the police, security or at a Booker prize judging, and word got round that I meant it’.

But it wasn’t a joke that made the 1983 Booker Prize ceremony so memorable. With the winner now announced, the 120 attendees were unaware that the evening’s crescendo was still to come, as Weldon was about to deliver an extraordinary speech that would toss a verbal grenade into the polite confines of the British publishing industry.

Weldon’s written draft of the speech is held in the Booker archive at Oxford Brookes University (the full version can be read here), and it still packs a punch 40 years later. Beginning with customary congratulations for the prize’s participants and winner, Weldon turned and addressed the publishers, both in the room and beyond. ‘So to the publishers, I would say this. We are the raw material of your trade. You do tend to forget it, you know. You forget that books need writers: that there are very few of us: that we are quite tough but perhaps not as tough as you think.’

She was just getting warmed up. ‘You use what is in our heads. You use us: the living us: and you don’t, quite frankly, look after your raw material very well. And as you turn into an industry, so must we turn into workers and organise. One hundred and twenty present and a handful of writers - I think you’d do without us altogether if you could.’

I will ask you if in your dealings with authors you are really being fair, and honourable, and right? Or merely getting away with what you can? If you are not careful, you will kill the goose that lays your golden eggs

She reminded publishers that authors are ‘like Atlas, in that they bear on their shoulders the entire literary world: all those who depend upon the writer for their income, the exercise of their own particular skills, their status and their very jobs’. Like criminals and prisoners, she observed, authors sit at the bottom of an inverted triangle; ‘Criminals, like artists, create an amazing amount of employment for an amazing number of people. Well, look round tonight.’

She then outlined, in great detail, a list of her dislikes about the industry. She singled out publishers’ ‘paternalism’, and the way they effectively say to writers, ‘Aren’t you lucky, we’re going to publish your book, actually publish your book!’

‘I will ask you if in your dealings with authors you are really being fair, and honourable, and right? Or merely getting away with what you can? If you are not careful, you will kill the goose that lays your golden eggs.’

Speaking on behalf of her fellow authors, she said that ‘the writer dislikes the rise of the editor’, who ‘smooths over all inconsistencies and all eccentricity, and produces a bland finished product, unexceptional and perfectly controlled and no wonder Britain has the lowest percentage of novel buyers per head of population in Europe.’

She attacked publishers for paying their staff poorly compared to other creative industries: ‘You underpay your editors, and your designers, and your production people. It means morale inside your houses is low: it means a job which should take a week takes a month.’

She said that while publishers may have graduates with first-class degrees queuing up for jobs, ‘They’re the wrong graduates, and they’re not queuing for the right reason. They just want jobs. They don’t love books.’ The more talented individuals, she argued, were choosing ‘an exciting and well-paid job in television or journalism’ over a life of ‘dignified poverty in publishing’.

She reprimanded publishers for being slow to support authors in setting up the Public Lending Right and said ‘We find it extraordinary that you demand to keep the copyright of what comes out of our heads, not just while we’re living but after we’re dead. Fifty years after we’re dead! Why? There’s no sense in it, or justice.’

She then addressed the Publishers’ Association, calling it ‘a beast which rather plumply wanders round the current contract jungle, tearing into the living flesh of writers, snarling “custom and practice” if anyone so much as asks why’.

But there was a twist. Weldon did not have the opportunity to deliver her speech in its entirety. She was reading it from an autocue, and at 10 pm promptly, the ceremony’s power was cut due to trade-union action. She had intended to end the speech on a positive note, but, she later told the Guardian, ‘The boards went blank before I had time to finish with the usual pacifying bit’.

‘All hell broke loose,’ she said, as the impact of her words rippled around the hall. Weldon would later recall that a senior publishing figure stood up, and incensed with rage at her reproach to the industry, walked over to her literary agent and landed a punch. It was the ‘second best thing to hitting me,’ she said.

Later, when speaking to the Sunday Herald, she said she had fully intended to make an ‘anti-publisher speech’ while ‘calling them to order’ and claimed that she was banned from all Booker dinners thereafter. Weldon didn’t attend for another ten years.

But while her speech caused an unprecedented furore, it wasn’t the evening’s only gaffe. The presenter of the ceremony’s television coverage, Selina Scott, had begun the evening’s affairs by asking Weldon if she really had read ‘all’ of the 100 submitted novels, to stifled laughter in the hall. (‘Of course I have!’ Weldon replied.)

To this day, Weldon’s speech remains one of the prize’s most memorable moments - second only, perhaps, to when John Berger shocked the literary establishment by giving away half of his prize money to the British Black Panther movement. In later years, Weldon reflected on her unique place in the prize’s history, while speaking to the Guardian. ‘It’s all got rather dull since,’ she said wryly. ‘No one hits anyone.’