As part of a series in which Booker authors choose their favourite Booker books, Damon Galgut takes a look at James Kelman's 1994 winner. 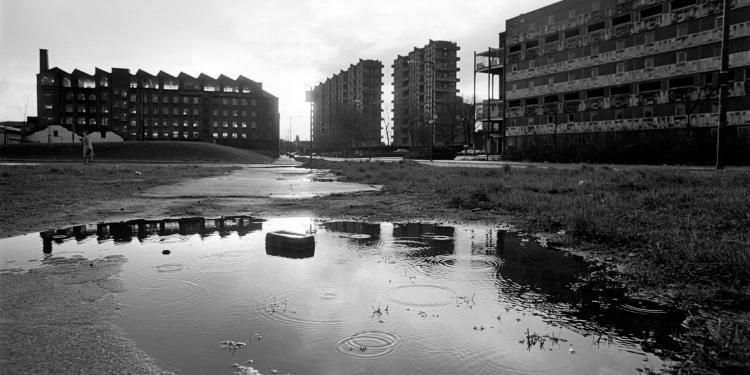 'The narrative rope is made of different strands, twined together, but words are the common element, and they all run together, with no easy compartments or signposts.'

Damon Galgut, author of the 2021 Booker Prize-shortlisted The Promise, writes about why he loves the narrative voice employed by James Kelman in the 1994 Booker Prize-winning novel How late it was, how late.

How late it was, how late, which won the Booker Prize in 1994, is built around one Sammy Samuels, an angry, foul-mouthed, working-class Glaswegian in his late thirties. Sammy wakes up in an alleyway after a long drinking binge, with no clear idea of how he got there. Soon afterward, he gets beaten by two plain-clothes policemen, so badly that he loses his sight. The plot, such as it is, deals with how Sammy copes, or doesn’t cope, with his blindness, and how he interacts with the people he encounters. All these exchanges, because Sammy cannot see who he’s speaking to, take on a sort of metaphysical anxiety.

Why admire this novel? Lots of reasons, but foremost among them is its voice. It’s often described as stream-of-consciousness, but in fact the narrative moves fluidly between first, second and third person:

The interesting thing for Sammy, the beneficial thing for Sammy, or it might be, ye hate to fucking tempt the fates, especially where the DSS is concerned; but there was an outside chance, if he was a gambling man which he wasnay, no now, no really, although he used to be, a gambling man, quite heavy, but no now…

The trick he’s pulling there makes sense to me, though it’s hard to express. Let’s just say that Kelman’s external voice came too close to Sammy’s internal monologue, and they blended into one. At other moments, Sammy addresses himself, recounting his own story as a way to make sense of it, and another voice is added to the mix. So the narrative rope is made of different strands, twined together, but words are the common element, and they all run together, with no easy compartments or signposts. No concessions to the reader!

Kelman didn’t invent this approach, but he’s using it for purposes uniquely his own. In almost all his stories, there is one particular character at the heart of it, and he concentrates his attention so fiercely on this person that every tool at his disposal – even grammar and idiom and sentence structure - is bent to serve his purpose. Consciousness is his true subject, and he pursues it through language; everything else is secondary.

Sammy’s furious voice caused controversy at the time. Kelman came under attack for his potty-mouth, which now seems like a quaint complaint, but there were also objections that the Scottish, working-class dialect made his work inaccessible. So it’s gratifying to hear Douglas Stuart describe How late it was, how late as a book that changed his life, because he could see his own people – and, presumably, himself – on the page.

That’s not a small thing, of course. But for somebody like me, who has never set foot in Glasgow, the opposite is true: it shows me people I don’t know, in ways that make them profoundly real. By being so highly localised and particular, Sammy becomes universal.

Damon Galgut is the author of The Promise, shortlisted for the 2021 Booker Prize.

How late it was, how late

James Kelman’s raw, wry vision of human survival in a bureaucratic world is given voice by Sammy, an ex-convict with a penchant for shoplifting.

James Kelman offers us a harrowing glimpse into a realm where power is unchecked and liberties are few or nonexistent.

James Kelman’s brilliant and complex character study tells the story of one week in a man's life, in which he decides to change the way he lives.

Damon Galgut’s powerful tale of an unlikely friendship in an uneasy time, set in a dilapidated rural hospital in post-apartheid South Africa.

In a Strange Room

Damon Galgut’s haunting evocation of one man’s search for love and a place to call home - a novel of longing and thwarted desire, rage and compassion.

‘In film, the point-of-view jumps and changes all the time - why not in a novel?’

Douglas Stuart, author of Shuggie Bain sits down to talk to us after being longlisted about writing his debut novel, setting a book in Glasgow and what he’s working on next.

Damon Galgut is a South African playwright and novelist, who wrote his first novel aged 17. He's been shortlisted three times for the Booker Prize and won in 2021 for his ninth book, The Promise.

James Kelman was born in Glasgow. His novel How late it was, how late won the 1994 Booker Prize.