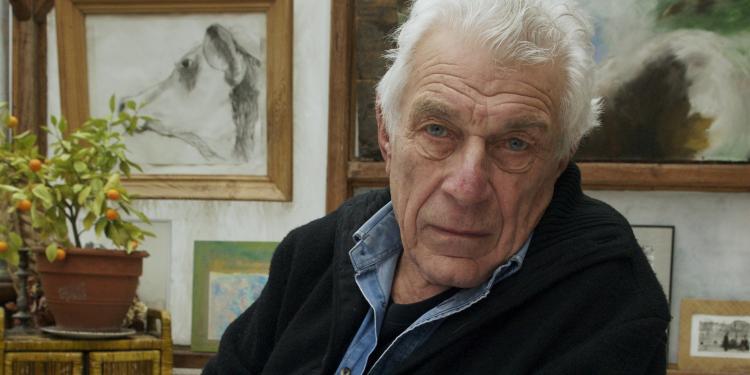 In this new film to mark the 50th anniversary of John Berger’s Booker win, Jo Hamya revisits the prize’s most controversial moment, reveals what happened to Berger’s prize money and explores the legacy and impact of his 1972 novel, G.

In ‘Seeing G.’, a new film to mark the 50th anniversary of John Berger’s Booker win, Jo Hamya revisits the prize’s most controversial moment, reveals what happened to Berger’s prize money and explores the legacy and impact of his 1972 novel

‘All history,’ writes John Berger in his 1972 Booker Prize winning novel, G., ‘is contemporary history: not in the ordinary sense of the word, where contemporary history means the history of the comparatively recent past, but in the strict sense: the consciousness of one’s own activity as one actually performs it. History is thus the self-knowledge of the living mind. For even when the events which the historian studies are events that happened in the distant past, the condition of their being historically known is that they should vibrate in the historian’s mind.’

Few moments in Booker history vibrate so resonantly across time as Berger’s acceptance speech for the prize at London’s Cafe Royal. In it, he demonstrates a keen awareness of the colonial past which shaped his life’s conveniences and successes, and a clear desire not to encounter that past passively. ‘The novelist asks questions which no other literary form can ask,’ Berger declared, ‘questions about the individual working on his own destiny: questions about the uses to which one can put a life — including one’s own.’

Several further points emerged. That although he had won for a novel about the awakening of one man’s political consciousness, in which the image of a statue of chained Moors epitomised the book’s key message, the money he was about to be awarded came from Booker McConnell (then-sponsors of the prize), whose founders had made their fortune on sugar plantations in Guyana. That although he intended for the money to help fund a non-fiction project on migrant workers, its very existence had propagated the poverty of West Indian migrants who had been denied British citizenship even while they propped up its working class. But as Berger pointed out — ‘the novelist is concerned between the interaction of the individual and historical destiny. The historical destiny of our time is becoming clear. The oppressed are breaking through the wall of silence which was built into their minds by their oppressors.’

‘I have to turn this prize against itself,’ he went on. ‘The half I give away, will change the half I keep.’ In a move made notorious by press, Berger donated half of his prize money to the London-based British Black Panther Movement. ‘I badly need more money for my project about the migrant workers of Europe,’ he explained, ‘[And] the Black Panther Movement badly needs more money for their newspaper and for their other activities…the sharing of the prize signifies that our aims are the same.’

To this day, no one quite seems to have grasped the humanity and nuance of Berger’s speech. The language of newspapers has not changed. If in 1972, the only takeaway was that ‘Berger bit the hand that paid him’ (per the Daily Express), that the speech ‘was long’ (the Evening Standard), and the entire event amounted to ‘a sick little episode all around’ (Sunday Telegraph), then the internet-honed clickbait vernacular of the early 21st century has fared no better. According to the Guardian, New York Times and New Yorker, we remember the event as ‘a mess’, as part of ‘Booker’s bad history’, a ‘dirty little (open) secret’, and the eloquence of Berger’s delivery as, ‘a marketing tactic’ for the prize.

It seems a shame to let Berger’s words fall by the wayside. Their sentiment is timeless. Perhaps even more than that, it seems a shame that in the month of G.’s 50th anniversary of winning the prize, so little attention has been paid to it; that despite Berger’s renown, and Booker’s literary standing, the novel remains obscure to most audiences.

There is a lot in G. which holds true to the nature of Berger’s speech. It is a book in which individual sensory and aesthetic experience is a means to experiencing history; it is the reason one cannot ever exempt themselves from history. To say (as often is said) that it is a novel about a Don Juan figure’s sexual exploits across Europe at the turn of the century is something of an oversimplification in a post-MeToo era. We are speaking of the writer who, in the same year G. was published, re-framed what it means to look at the naked female body in Ways of Seeing. G. is a book about sex and sensory experience as a means to think through personal freedom, collective experience, and what form, precisely, the stories we tell ourselves take — what impact that narrativisation has on the broader sweep of history.

Yes, G. has many colourfully described affairs in the novel. Equally well and simultaneously rendered are the Bava Beccaris massacre of 1898 in Milan, the Boer War, Jorge Chaves’ first flight across the Alps, the outbreak of the First World War. It is a beautiful and fragmented and strange book. It features a narrator who winks at the reader with pronouncements like, ‘Why does writing about sexual experience reveal so strikingly what may be a general limitation of literature in relation to aspects of all experience?’ It features a ridiculous doodle of a smiling penis.

It has been an enlightening experience to put together this documentary for the Booker about G.’s history as a novel in collaboration with Yves Berger, Farrukh Dhondy, Lisa Appignanesi, the British Library, and Oxford Brookes Special Collections Library. The film examines Booker’s past response to Berger’s speech, pieces together a first-hand account of what happened on the night Berger met with the British Black Panthers, and looks over his personal archive with those who knew and admired him.

In the research and preparation I’ve carried out over the past few months, I have tried to be as true to the spirit of Berger’s speech and novel as I could be. I encourage you to read the speech. While watching this film, I encourage you to think analytically about the question of heritage in the arts, and the roles of prize culture and media reportage in the book industry. Finally, I implore you, whole-heartedly, to buy a copy of G.