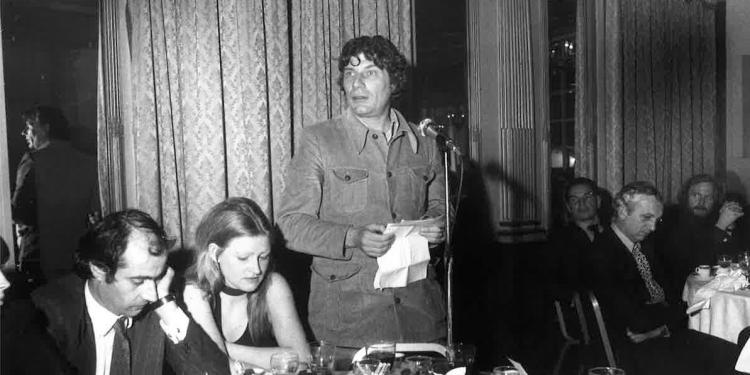 John Berger’s decision to give away half of his £5,000 prize money in 1972 was one of the Booker’s most controversial moments. In this speech, delivered at the Café Royal in London after being announced as the winner, he set out the reasons behind his actions

Speech by Mr John Berger on the occasion of the award of the 1972 Booker Prize for his novel G. - Cafe Royal, Regent Street, London W.1. : Thursday, 23rd November 1972

Since you have awarded me this prize, you may like to know, briefly, what it means to me.

The competitiveness of prizes I find distasteful. And in the case of this prize, the publication of the short list, the deliberately publicised suspense, the speculation of the writers concerned as though they were horses, the whole emphasis on winners and losers is false and out of place in the context of literature.

Nevertheless prizes act as a stimulus - not to writers themselves but to publishers, readers and booksellers. And so the basic cultural value of the prize depends upon what it is a stimulus to. To the conformity of the market and the consensus of average opinion; or to imaginative independence on the part of both reader and writer. If a prize only stimulates conformity, it merely underwrites success as it is conventionally understood. It constitutes no more than another chapter in a success story. If it stimulates imaginative independence, it encourages the will to seek alternatives. Or, to put it very simply, it encourages people to question.

The reason why the novel is so important is that the novel asks questions which no other literary form can ask: questions about the individual working on his own destiny; questions about the uses to which one can put a life - including one’s own. And it poses these questions in a very private way. The novelist’s voice functions like an inner voice.

Although it may seem somewhat inappropriate on my part, I would like to salute - and to thank - this year’s jury for their independence and seriousness in this respect. All four books on their short list demonstrate the kind of imaginative non-conformity I’m talking about. That they gave a prize to my book gave me pleasure - because it represented a response, a response from other writers.

G. took five years to write. Since then I have been planning the next five years of my life. I have begun a project about the migrant workers of Europe. I do not know what form the final book will take. Perhaps a novel. Perhaps a book that fits no category. What I do know is that I want some of the voices of the eleven million migrant workers in Europe and of the forty or so million that are their families, mostly left behind in towns and villages but dependent on the wages of the absent worker, to speak through the pages of this book. Poverty forces the migrants, year after year, to leave their own places and culture and come to do much of the dirtiest and worst paid work in the industrialised areas of Europe, where they form the reserve army of labour. What is their view of the world? Of themselves? Of us? Of their own exploitation?

For this project it will be necessary to travel and stay in many places. I will need sometimes to take Turkish friends with me who speak Turkish, or Portuguese friends, or Greek. I want to work again with a photographer, Jean Mohr, with whom I made the book about the country doctor. Even if we live modestly as we ought to, and travel in the cheapest way possible, the project of four years will cost about ten thousand pounds. I did not know exactly how we would find the money. I did not have any of it myself. Now the award of the Booker Prize would make it possible to begin.

Yet one does not have to be a novelist seeking very subtle connections to trace the five thousand pounds of this prize back to the economic activities from which they came. Booker McConnell have had extensive trading interests in the Caribbean for over 130 years. The modern poverty of the Caribbean is the direct result of this and similar exploitation. One of the consequences of this Caribbean poverty is that hundreds of thousands of West Indians have been forced to come to Britain as migrant workers. Thus my book about migrant workers would be financed from the profits made directly out of them or their relatives and ancestors.

More than that, however, is involved. The Industrian Revolution and the inventions and culture which accompanied it and which created modern Europe, was initially financed by profits from the slave trade. And the fundamental nature of the relationship between Europe and the rest of the world, between black and white, has not changed. In G. the statue of the four chained Moors is the most important single image of the book. This is why I have to turn this prize against itself. And I propose to do so by sharing it in a particular way. The half I give away, will change the half I keep.

Before the slave trade began, before the European dehumanised himself, before he clenched himself on his own violence there must have been a moment when black and white approached each other with the amazement of potential equals. The moment passed. And henceforth the world was divided between potential slaves and potential slavemasters. And the European carried this mentality back into his own society. It became part of his way of seeing everything.

The novelist is concerned with the intersection between individual and historical destiny. The historical destiny of our time is becoming clear. The oppressed are breaking through the wall of silence which was built into their minds by their oppressors. And in their struggle against exploitation and neo-colonialism - but only through and by virtue of this common struggle - it is possible for the descendants of the slave and the slavemaster to approach each other again with the amazed hope of potential equals.

This is why I intend to share the prize with those West Indians in and from the Caribbean who are fighting to put an end to their exploitation. The London-based Black Panther Movement has arisen out of the bones of what Bookers and other companies have created in the Caribbean; I want to share this prize with the Black Panther Movement because they resist both as black people and workers the further exploitation of the oppressed. And because, through their Black People’s Information Centre, they have links with the struggle in Guyana, the seat of Booker McConnell’s wealth, in Trinidad and throughout the Caribbean: the struggle whose aim is to expropriate all such enterprises.

You know as well as I do that the amount of money involved - as soon as one stops thinking of it as a literary prize - is extremely small. I badly need more money for my project about the migrant workers of Europe. The Black Panther Movement badly needs more money for their newspaper and for their other activities. But the sharing of the prize signifies that our aims are the same. And by that recognition a great deal is clarified. And in the end - as well as in the beginning - clarity is more important than money.

Seeing G: John Berger, the Black Panthers and the Booker Prize, 50 years on