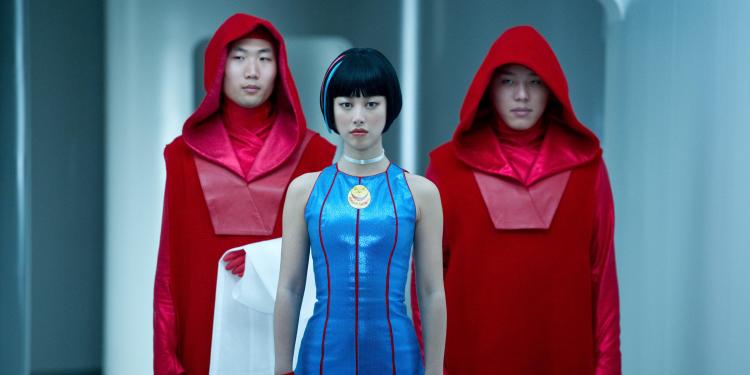 Featured in the new series of the BBC book show Between the Covers, David Mitchell’s genre-defying ‘Russian doll’ epic remains one of the most original, unusual and polarising works in the Booker Library. Here’s our beginner’s guide

What exactly is Cloud Atlas about?

Cloud Atlas, which was shortlisted for the Booker Prize in 2004, is a novel comprised of six interconnected tales, each written in a unique style and told from a differing perspective: a reluctant voyager crossing the Pacific in 1850; a disinherited composer blagging a precarious livelihood in between-the-wars Belgium; a high-minded journalist in Governor Reagan’s California; a vanity publisher fleeing his gangland creditors; a genetically modified ‘dinery server’ on death row; and a young Pacific Islander witnessing the nightfall of science and civilisation. Each of David Mitchell’s characters has a comet-shaped birthmark and names, dates and references reoccur, hinting at a greater connection between the six protagonists.

Beginning in 1850 and ending in a dystopian future, Cloud Atlas’s stories all echo and impact on each other, showing how fates can intertwine. Together, they point to a terrifying vision of what is to come. Throughout his novel, Mitchell weaves a deep critique of the post-industrial age. But the heart of Cloud Atlas is a labyrinth of tales that delve into the human experience, which Mitchell tells through multiple voices.

Mitchell purposefully interrupts each of the stories to begin the next, and civilisation - as we know it - ends in the middle of the novel, only for the author to pick up with a post-apocalyptic vision of the future, allowing him to conclude each tale. His novel defies literary conventions and erases the boundaries of language, genre and time to offer a meditation on humanity’s dangerous will to power, and where it may lead us.

How is the book structured?

Cloud Atlas is comprised of six distinct stories, told in eleven parts. But while most novels conventionally use chapters to delineate sections of their plot, Cloud Atlas dovetails its own stories together, meaning one may simply end, abruptly and without conclusion, for another to begin. The following tale takes the reader to a new time and location, essentially to begin all over again, without acknowledgement of the previous narrative. After the sixth story ends, Mitchell then resumes the previous five stories at points further into the novel.

Still with us? The book has been written in what’s called a ‘Russian-doll’ style structure, meaning each narrative sits within the following story. Each story is connected to the next by something placed within the text, such as mention of a document, a series of letters, or even a novel - containing a wry nod to the events of a previous chapter.

Cloud Atlas is then brought to its conclusion in reverse chronological order in the second half of the book and things come full circle when Mitchell wraps up the opening narrative, as the novel’s finale. It’s complicated, but that’s really where the genius of the book lies. In a nutshell, think of it as six separate novellas with a small easter egg, nodding to the previous story, within each.

Who is David Mitchell?

David Mitchell has written nine novels as well as essays and adapted his work for screen and stage. He was born in 1969 on the Lancashire coast, but was raised in Malvern, Worcestershire.

As a child, Mitchell didn’t speak until age five, after which he developed a stammer at age seven. As a result, his childhood was often one of solitude, which meant he spent a lot of time alone with his head in a book. He spent his formative years reading J.R.R. Tolkien, Isaac Asimov and Ursula K. Le Guin. Mitchell went on to complete a degree in English and American literature and an MA in comparative literature, after which he dedicated himself to writing.

Mitchell has now been nominated for the Booker Prize five times. In 2018, he won the Sunday Times Award for Literary Excellence, given in recognition of a writer’s entire body of work.

What have people said about Cloud Atlas?

Cloud Atlas has garnered praise from across the literary world, and beyond, since publication. Microsoft founder Bill Gates wrote about it on his personal website, GatesNotes. In a blog titled ‘A wonderful, mind-bending novel’, Gates praised it as a wholly unique read, stating he had ‘never come across anything quite like it in a book before’ and was ‘eager to see how he would connect each story to the ones that came before’. The businessman turned philanthropist concluded that Cloud Atlas was ‘a grand tale about human nature and human values - the things that change and the things that don’t, over hundreds or even thousands of years’.

Critic and novelist A.S. Byatt, who won the Booker Prize in 1990 with Possession, wrote about the novel in the Guardian when it was published in 2004. ‘Cloud Atlas is powerful and elegant because of Mitchell’s understanding of the way we respond to those fundamental and primitive stories we tell about good and evil, love and destruction, beginnings and ends,’ she said. ‘He isn’t afraid to jerk tears or ratchet up suspense - he understands that’s what we make stories for.’

More recently, Shehan Karunatilaka, the winner of the Booker Prize 2022, cited Cloud Atlas as a big influence on his novel The Seven Moons of Maali Almeida. He read Mitchell’s novel ‘many times’ during the process of writing Seven Moons, as well as watching the adaptation. ‘I know some people say it’s confusing, but those people are wrong,’ he joked, when answering readers’ questions on video for The Booker Prize website earlier this year.

Writing for the Spectator, Philip Hensher said ‘Mitchell is a novelist who knows exactly what he is doing, and one who is always one or two steps ahead of the reader; and at the end it seems to evaporate like the best dream you ever had’.

But while there was plenty of acclaim, not everyone loved Mitchell’s work. In the Telegraph, Theo Tait wrote: ‘Mitchell’s ambition and his dedication compel respect’ but added ‘there is a mighty problem of tone’ stating ‘Cloud Atlas spends half its time wanting to be The Simpsons and the other half the Bible’.

In the New York Times, Tom Bissell wrote that ‘the novel is frustrating not because it is too smart but because it is not nearly as smart as its author’. While acknowledging the novel’s expanse, they said ‘it might very well move things forward. It is also a book that makes one wonder to what end things are being moved’.

What has David Mitchell said about Cloud Atlas?

When writing in the Guardian in 2010, Mitchell acknowledged where the spark for Cloud Atlas came from. ‘I’d had an idea for a polyphonic “Russian doll” novel ever since Italo Calvino’s If on a Winter’s Night a Traveller had wowed me at uni in the late 80s,’ he recalled. ‘Calvino’s book is made of interrupted narratives which are never returned to – my idea was to write a novel whose narratives would be returned to, and completed in reverse order,’ Mitchell said.

The author spoke to the Guardian again in 2019 and, discussing some wider influences that helped shape both characters and plot, Mitchell acknowledged Jared Diamond’s book Guns, Germs and Steel and One Flew Over the Cuckoo’s Nest, as well as ‘pioneering SF classics such as Aldous Huxley’s Brave New World, Yevgeny Zamyatin’s We and The Machine Stops by E.M. Forster – yes, that E.M. Forster’. He also said that Cloud Atlas contained ‘rich dollops of Blade Runner’.

The structure was something he purposefully chose to experiment with, he said, yet was unsure if it would pay off: ‘The Russian-doll structure gets remarked on a lot, often with the word “ambitious”. I can’t truthfully claim I set out to be ambitious: it was much more a question of, “What’ll happen if I try this?”’

This non-linear structure, while unusual, was something he - surprisingly - wrote in a more conventional manner. ‘I wrote the six novellas in order and then just spent a morning with the marvellous “cut and paste” function on Windows and assembled the novel in just about an hour or so’, he told the BBC when he appeared on their World Book Club in 2013.

Should I watch the film adaptation?

Despite being deemed ‘unfilmable’ by some commentators, Cloud Atlas was adapted for the big screen in 2012 by the Wachowskis, known for the Matrix films; alongside Tom Tykwer, director of Run Lola, Run; with David Mitchell himself on writing duties. With a budget in excess of $100million, it was one of the most expensive independent films ever made. Structurally similar to the book, with six interlocking stories, it featured a cast who reappeared within each story in different roles, defying age, gender and race.

But even a cast of Hollywood A-listers - including Tom Hanks, Halle Berry, Hugh Grant and Jim Broadbent - couldn’t save the ambitious movie from polarising reviews. Film critic and Pulitzer Prize-winner Roger Ebert called it ‘one of the most ambitious films ever made’, yet it only scraped 6.7 out of 10 on review aggregator website Rotten Tomatoes. In the UK, film critic Mark Kermode called it ‘an extremely honourable failure, but a failure’ and it was declared the worst film of the year by both the Village Voice and Time magazine. It seemed the fate of the film was not to follow that of the novel.

But despite ultimately being deemed a flop upon release, the film has since garnered a cult following, with many film aficionados now claiming it to be one of the Wachowskis’ overlooked masterpieces.

With so many titles in the Booker Library imagining terrifying scenarios for humanity, it is tempting to wonder which of those fictional nightmares may be rediscovered as grim truth by future readers – and shocking to observe the extent to which some have already become reality

‘The internet - in the form of social media, at least - is much more like fiction than it is anything else.’

Read a discussion between Mohsin Hamid and his editor, Simon Prosser, about the creative process involved in writing Exit West.