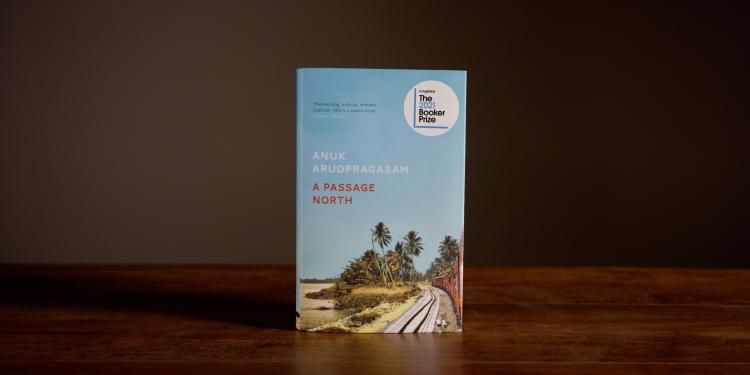 Anuk Arudpragasam speaks to us about the Sri Lankan Tamil canon, and writing about war.

How does it feel to have A Passage North longlisted for the Booker?

I’ve had many different, sometimes contradictory feelings, but I’m gratified to be in the company of the other wonderful writers on the longlist.

I’ve been most influenced by the modernist novel of consciousness, by Virginia Woolf, Marcel Proust, and Robert Musil in their attempts to depict time and interiority: in a sense this is what I want to do for my own time and place and people. But I also view each book I write as a kind of apprenticeship to writers I want to emulate. With my first novel, for example, I looked to Samuel Beckett and Péter Nádas for the way they incorporate the body into consciousness, and in A Passage North to Thomas Bernhard and Javier Marias for their use of digression and rhythm. At the moment it is Elena Ferrante, for the way she situates a life in time.

Of the ones I’ve read, the one I am most grateful for is John Berger’s novel G, for its precise phenomenological insight and gentle didacticism.

You’ve written two books and they approach the Sri Lankan civil war in different ways. Can you tell us a bit about the presence of that conflict in your fiction, and in particular its resonance in A Passage North?

I’m from a Tamil family of means in Colombo and grew up far away from the war in the northeast, which is where my family is originally from. I didn’t set out to write about war when I began writing fiction, but after witnessing the government’s systematic destruction of Tamil society during the final phase of fighting, I have been unable, like many Tamils outside the war zone, to stop thinking about it.

My first novel was an attempt, borne out of some desire to punish myself, to imagine and inhabit that violence as far as I could. I have tried to move away from depicting violence directly in my writing since then, and A Passage North is more about witnessing violence from afar than it is about experiencing it up close. What does it mean to witness such violence virtually, after the fact, and be totally powerless to act? What does it mean to feel that the world is coming to an end when nothing in one’s physical environment registers any trace of that fact? These are some of the questions A Passage North tries to explore, and in that sense this book is closer to my own experience of the war.

What place did reading have in your life as a child?

I don’t come from a household of books or readers, but I was lucky because my parents always encouraged me to read when I was young. I didn’t read much for most of my adolescence, but when I was fifteen or sixteen I was browsing the shelves of Vijitha Yapa, a bookshop close to where I grew up in Colombo, and happened to find their very well stocked philosophy section. I picked out a couple of books randomly, and though I couldn’t fully understand them I was bewitched by their sense of wonder, especially in Plato and Descartes, the childlike unknowingness of the way they ask their questions about the world, and their earnest hope for answers. Between that unknowingness and that hope for answers is a sense of wonder I have searched for in every book I’ve read since then.

Can you tell us more about Sri Lankan Tamil writing? Is there a Tamil canon, and if so, where do you see your own writing in relation to it?

Just as the saints are canonized by the Catholic Church, the creation and maintenance of a literary canon depends on institutions: on universities, schools, bookshops, publishers, magazines, and so on. There is a vast and stunning canon of Tamil poetry from the pre-colonial period, when literature was often grandly patronized by state and religious institutions. These institutions were destroyed by colonization, of course, and with their destruction the Tamil canon, like many other colonized literatures, stopped breathing and eventually became fossilized. This has changed a lot since independence in Tamil Nadu, where there are now many state and private institutions for the promotion of literature, but in Sri Lanka Tamil has remained a disenfranchised language.

The state-sponsored burning of the Jaffna Library in 1981, which contained a large archive of centuries-old Tamil palm-leaf manuscripts, was a huge impetus for the separatist movement. Tamil literature in Sri Lanka, as a result, has largely had to survive without such institutions: I haven’t heard of any Tamil writer in Sri Lanka who writes full time or has a professional editor for their work, and most of them have to use their own money to print and distribute books, to conduct their own meetings and workshops.

And yet, under the shadow of thirty years of violence, out of pure love of literature, these writers have created a powerful body of work and a small but flourishing literary world. My own small wish, for the time being, is to translate some of this work into English, and also to translate into Tamil a few of the foreign texts I like most.

Anuk Arudpragasam's masterful novel is an attempt to come to terms with life in the wake of the devastation of Sri Lanka's 30-year civil war.

Behind the scenes: the Booker and book binding