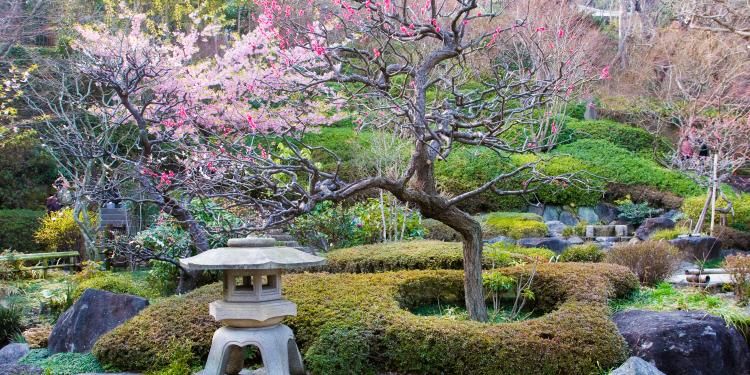 Mapping The Garden of Evening Mists

According to Tan Twan Eng, ‘a garden is composed of a variety of clocks’. In The Garden of Evening Mists - his 2012 Booker-shortlisted novel - there are three.

Each timeline spans a period in the life of its protagonist, Yun Ling: her internment in a Japanese war camp aged 19; her time as an apprentice to a Japanese gardener, Nakamura Aritomo, in the Cameron Highlands of Malaya in 1951; and her return to the titular garden, Yugiri, in retirement thirty-six years later.

With frequent pronouncements on what ought to be pruned and controlled, and what ought to be allowed to grow as it pleases, the novel’s setting becomes a formal mechanism for the reader to think through ideas of memory, colonialism, loss, and human development. Despite this, Tan has always resisted giving his readers a visual representation of the garden, preferring them to create their own version while reading.

Now, as The Garden of Evening Mists undergoes something of a renaissance with the release of a film adaption by HBO Asia and its guest-starring spot on BBC2’s Between the Covers, Tan gives us an exclusive look at his original hand-drawn map of Yugiri - which leads to a conversation about the relationship between map-making and writing, and how languages from all over the world can enrich prose written in English.

From his archives, Tan Twan Eng shared a map for The Garden of Evening Mists, which he drew in a lined notebook. In black and red ink, with some pencil notes, the map shows landmarks including ‘the big pond’, in the middle of which Tan has drawn a small structure, labelled ‘5 standing stones’. Our discussion begins with this map.

At what point did the need for a map arise?

I had an overall picture in my mind when I began writing my novel. I was also studying pictures of Japanese gardens, trying to incorporate some of the more striking features into the story, features which I felt would act as symbols or visual representations of some of the themes and ideas I wanted to explore. After a while I felt that the garden in my head was getting overcrowded.

I realised that the only way I could have a sense of organisation was to sketch out a map of the Japanese garden. But as you can see, I am, alas, no Tolkien when it comes to drawing maps.

I also needed the map for practical reasons – for example, I had to decide how far the pond was from the house, and how long would it take for Aritomo and Yun Ling to walk there. A large part of the mechanics of writing a novel is solving the practical problems.  I remember reading somewhere that Umberto Eco, when he was writing The Name of the Rose, paced out the length of an aisle in a church so he’d know exactly how many steps his characters would need to take; Eco also wanted to be certain of the length of a conversation his characters could have if they were walking down that aisle.

At the bottom of the page are two notes written in pencil: ‘remove smaller pond - it’s confusing to have two’ and ‘add a waterwheel - Emperor’s gift to A’. Can you tell us about these?

These changes arose during the course of developing the story. Initially I had a small pond just below the verandah, but I soon realised that it would only confuse the readers, having two ponds in the garden. A few of the pivotal emotional scenes took place by the main pond, so I didn’t want to dilute its impact in the story.

I had in mind also to put a waterwheel in the garden but I did not know where to place it. The waterwheel is a massive structure, and to find a suitable and effective place in the garden for it, I had to expand and change the borders of this imaginary garden. And that’s where the map came in useful again.

The requirements of the plot led to the map-making; they also caused a few changes to the landscape and features in the garden

Did the map lead to fictional content, or the reverse - did writing lead to map-making?

The requirements of the plot led to the map-making; they also caused a few changes to the landscape and features in the garden. But it was easier, after I had drawn it, to picture where Aritomo and Yun Ling were in the garden, to describe how they worked in one section, how they walked from one area to another. I wanted different parts of the garden to evoke different emotions, as a way of showing the characters’ feelings without expressly telling the reader.

You’ve said that you’d like readers of have their own imagined idea of the garden: have you had any responses from readers over the years that have suggested a different visualisation of the book, or elaborated on your own? Has this led you to picture it differently?

There have been readers who’ve told me they wished I had included a map of the garden, but right from the very beginning I wanted each reader to create their own garden in their minds. It’s one reason why I keep the descriptions of my characters to a minimum. Let each reader have his or her impression.

Over the years, whenever I think of Yugiri, the garden has, in my mind, matured. Oddly, I see it as an empty garden, with no people in it. Perhaps it’s like the Garden of Eden after Adam and Eve had been banished from it.

My memories of the garden were also altered by the recent film adaptation. The movie was filmed on location in Cameron Highlands, and the producers of the international production even constructed a real Japanese garden for the filming. I was invited to visit the set, and it was strange not only to see another interpretation of my garden, but to see that interpretation made real.

How does it feel to look at the map you drew almost 10 years on?

It’s been an interesting exercise, digging up the old map I drew. Comparing the garden then to how I picture it now, I feel as if I’ve become Yun Ling, my main character, returning to Yugiri after an absence of many years.

Over the years, whenever I think of Yugiri, the garden has, in my mind, matured. Oddly, I see it as an empty garden, with no people in it.

The Garden of Evening Mists was your second English-language novel, and incorporates words and phrases from Malay, Japanese and other languages. However, you chose not to include a glossary. Is fiction’s purpose to disorient, or transport? Both are interesting ideas because rather than indicating that a novel should relay information, the onus is placed on the reader to overhear it. Could you speak more about these ideas?

There’s usually some degree of discomfort in any kind of travelling, and if fiction can transport AND disorient at the same time, then I’d say it’s a successful work. Think of how you sit in a café in a foreign city: you’re surrounded by languages you don’t understand. It’s disorienting at first, but also exhilarating. And if you open your mind and surrender yourself to the strangeness, after a while I think you can feel the meaning of the words you hear, even if your brain can’t make any sense of it. That’s why I’ve always resisted providing a glossary.  I want readers to experience this unsettling sensation.  Of course, I do provide clues to the meaning of non-English words I use in the scenes, and I know readers are smart and will be able to understand the meaning of those words or phrases through some kind of literary osmosis.

I started reading fiction from a very young age – a lot of English and American authors – and it often aggravated me when they slipped in words or sentences in French or German or Italian or Latin without translating them into English, forcing me to seek the answers outside their novels.  So in a way my stubborn refusal to include a glossary now is a kind of payback.

Do you think not including a glossary rids a book of the assumption of who it is for? In another sense, does it allow anyone at all to come to the novel and understand it, both linguistically and tonally, on its own basis?

If you write in English, then there’s already an assumption about who you’re writing for: namely, people who are literate in English, regardless of their nationality or race or geographical location. You don’t want to make your novel difficult to comprehend by a large section of your readers, you don’t want to estrange them and discourage them from your work.

What are your views on ‘Englishes’ in general - how heterogeneous is English as a language to write in, with all the migrations and re-purposings that have enriched it?

It’s heterogenous in a sense that it’s understandable by millions of people around the world. Growing up in Malaysia, we’ve added our own twists to the language, and it’s the same everywhere: we modify it and in the process we enrich it. People around the world continue to understand it, and it retains the richness, the beauty of its roots, even as it changes. It’s like the ocean – it absorbs water from every river in the world; it changes, yet remains the ocean.

How do you look back on the process of writing The Garden of Evening Mists? What stands out in your mind as a particular recollection?

Each book gets harder and harder to write, I’ve discovered, and each has its own set of challenges. What stands out most is how hard it was, writing and rewriting The Garden of Evening Mists. I’ve lost count of the number of times I rewrote the book or moved the chapters and the scenes around. Each word had to be the most apt one, and set down in the optimal position in a sentence. I obsessed over how the paragraphs would look on a page – they couldn’t be too long, or too brief, otherwise the page would not have a balanced appearance.

The Garden of Evening Mists

The Garden of Evening Mists

Tan Twan Eng’s second novel is a tantalisingly evocative mystery set in Malaya in the late 1940s, a country in recovery from the Second World War.

Tan Twan Eng was born in Penang, Malaysia. His debut novel The Gift of Rain was longlisted for the 2007 Booker Prize and has been widely translated.

Find out more about the books featured on Between the Covers

The secrets of Sebastian Barry's The Secret Scripture

Inside the Fingersmith archive with Sarah Waters