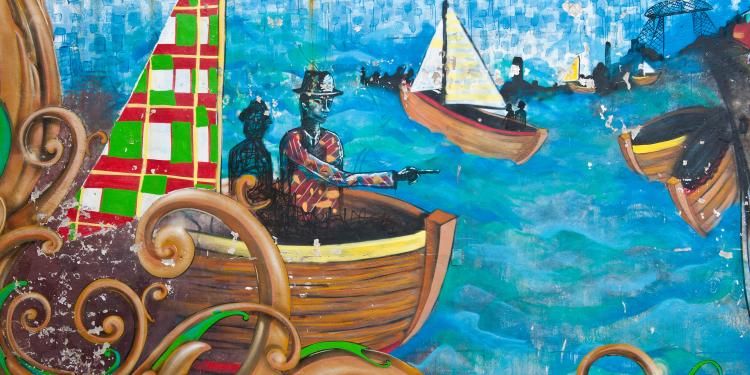 What's on my bookshelf: Claudia Piñeiro

The bestselling crime author talks us through the books that have inspired her career.

From the work of her favourite Argentinian author to a book that left a mark during her more formative years, here’s what’s on Claudia Piñeiro’s bookshelf.

For Claudia Piñeiro, writing is in her bones. She’s been creating fictional worlds for just as long as she has known how to write, since the tender age of five, when she learned the alphabet at school.

From there, Piñeiro has been honing her craft across multiple disciplines as a journalist, scriptwriter, playwright and author, with many of her books now adapted for the big screen. She has won national and international prizes, including the renowned German LiBeraturpreis for Elena Knows. And it’s with this novel that Piñeiro has been shortlisted for the 2022 International Booker Prize, a unique story that interweaves crime fiction with intimate tales of morality and the search for individual freedom.

It comes as no surprise she’s the third most translated Argentinean author, after Borges and Cortázar and has been aptly called the ‘Hitchcock of the River Plate’. So, to celebrate the novel’s place on the list, we asked Piñeiro to share a selection of books from her bookshelves – here’s what’s inspired and moved her.

The Little Virtues by Natalia Ginzburg

This book contains 11 short stories by Natalia Ginzburg, a writer I admire. The titular story is about educating children, emphasising that as parents we should teach them the ‘great virtues’, instead of the little virtues we resort to because it is easier for us. For example, teaching our children to be generous, rather than to save money. Throughout the text, the author underlines an idea I see as fundamental: our children do not belong to us. I read this story while raising my kids, still very small at the time, and its honesty moved me greatly. Another of my favourite stories from this book is ‘Worn-out Shoes’.

Autobiographical in style, Gornick’s book arrived in Spanish 30 years after it was written yet its relevance is striking. It is a book that shook me up. It details the conflictive relationship between a 77-year-old mother and her 45-year-old daughter, as they walk around the streets of New York, talking and arguing. They speak of the present and the past. The mother, a woman in mourning who suffers from depression, offers her opinions about her daughter’s love life and her failure to settle down. Into this two-way relationship comes a neighbour with a small child, who shows the protagonist that there are other ways of being a woman. I was moved by the connection between these women and the salvation they find through writing.

The Story of a Shipwrecked Sailor by Gabriel García Márquez

This book left a mark on me at a young age, both as a reader and as a writer. When I was a girl we didn’t have money to buy many books so I always waited anxiously to find out which ones the school assigned us. The year the teacher asked for The Story of a Shipwrecked Sailor, I was disappointed. What could possibly interest me about the tale of a sailor who falls from a military vessel and has to survive adrift for ten days? Nothing at all, I thought. I was wrong: as soon as I began to read García Márquez’s story I became that sailor, deciding whether or not to drink saltwater, or to kill and eat the seagull. With this book, García Márquez taught me that it doesn’t matter what the story is, but how it is told.

To the End of the Land by David Grossman

In Spanish, it was named The Whole of Life, while the original Hebrew title is A Woman Running from the News. I think this gives the best summary of the story told so masterfully by Grossman: a woman decides she won’t stay at home waiting for news of her son who is fighting and sets out to cross Israel on foot. If she walks, she knows that no one will turn up to announce the death of her son. That’s what she’s fleeing. And while she walks she remembers her past. There are some outstanding scenes in this novel, such as the account of the journey she made with her son on his way to sign up, driven by a chauffeur of Arab origin who has worked for their family for years. I read this novel when I was lucky enough to introduce Grossman at the Book Fair in Buenos Aires, and it was an experience I’ll never forget.

A Room of One’s Own by Virginia Woolf

Based on earlier lectures, this book of essays is key to thinking about the place of women in literature, the constraints we face then and now, and the material and immaterial difficulties we must overcome in order to write. The room of one’s own may be taken literally, because it is true that a specific space is needed in order to write, but it also represents the necessary economic independence for a woman to dedicate herself to literature. And we know that historically, men have held the reins when it comes to money and the economy. This book is a landmark for seeing ourselves as women, as writers and as readers. Many of our struggles – and my own in particular – draw on texts like this one.

This is the third novel by one of my favourite Argentinian authors: Manuel Puig. For me, starting to read Puig was like opening up a vast new world of literature, where it was permitted to experiment with language, mix registers, introduce elements of cinema and be kitsch. In this book, Puig narrates the last days of a male art critic and a female sculptor. As in most of his works, there is melodrama and family secrets, but also the suspense of detective fiction, psychoanalysis and, for the first time, references to the political turmoil our country was going through and that would shortly give rise to the military dictatorship. After the publication of this novel, Puig began to receive threats and he was forced into exile. It taught me that some fiction can be more political than a manifesto.

Shortlisted for the International Booker Prize in 2022. A unique story that interweaves crime fiction with intimate tales of morality and the search for individual freedom. Translated by Frances Riddle.