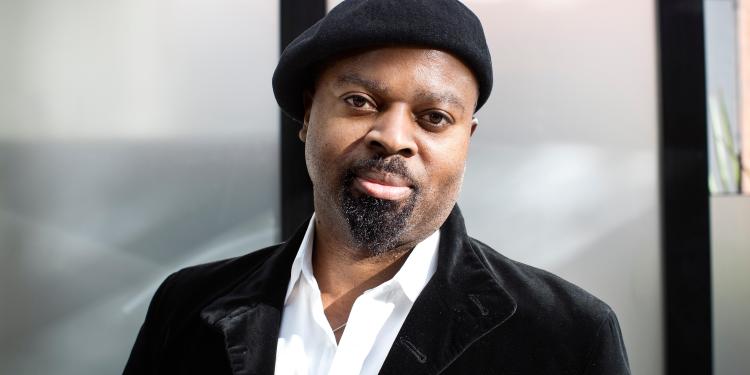 Ben Okri OBE is a poet, playwright and novelist. His novel The Famished Road won the Booker Prize for Fiction in 1991.

His other novels include Starbook, The Age of Magic, Dangerous Love and Astonishing the Gods, which was selected in 2019 as one of the BBC’s ‘100 novels that shaped our world.’ He has published eleven novels, four books of short stories, two collections of essays, and three volumes of poems. His latest book of poems, A Fire in My Head, was published in January 2021. His illustrated book for adults and children, Every Leaf a Hallelujah, is published in autumn 2021.

He wrote the script for Peter Krüger’s film N: The Madness of Reason, which won the 2015 Ensor Award for Best Film, and a much-acclaimed adaptation of Camus’s The Outsider for the Coronet Theatre in London in 2018, which won The Offies Award for Best Theatre Production.

His works have been translated into 27 languages, and have won numerous international prizes including the Commonwealth Writer’s Prize for Africa, the Paris Review Aga Khan Prize for Fiction, the Chianti Ruffino-Antico Fattore International Literary Prize, and the Premio Grinzane Cavour Prize.

The recipient of many honorary doctorates, he has been a Fellow Commoner in Creative Arts at Trinity College, Cambridge, and is a vice-president of the English Centre of International PEN, an honorary Fellow of Mansfield College, Oxford and a Fellow of the Royal Society of Literature. He is a trustee of the Booker Prize Foundation.

He was born in Nigeria, and lives in London.

Watch the 1991 Booker Prize ceremony, originally broadcast by the BBC as a Late Show special, in which Martin Amis makes his first appearance as a shortlisted writer, and Ben Okri wins for The Famished Road.

Chair of the 1991 judging panel Jeremy Treglown welcomes Ben Okri to the stage to collect the Booker Prize for The Famished Road.

On winning the Man Booker Prize for The Famished Road, Ben Okri read a poem and dedicated his prize to ‘all those who struggle and who suffer in silence and in public’.

Ben Okri’s unique Booker Prize-winning epic, narrated by ‘an unwilling adventurer into chaos and sunlight, into the dreams of the living and the dead’.

A Poem for the Booker Prize