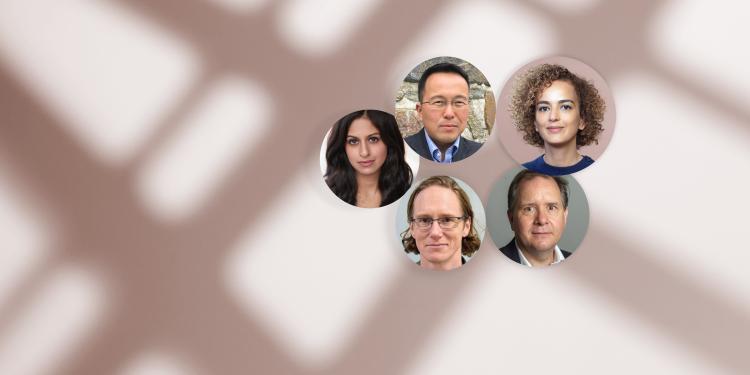 The judges for the International Booker Prize 2023 are revealed, as the prize opens for submissions

The 2023 judging panel will be looking for the best work of translated fiction, selected from entries published in English in the UK or Ireland between 1 May 2022 and 30 April 2023.

The announcement of the 2022 International Booker Prize winner, Tomb of Sand, written by Geetanjali Shree and translated by Daisy Rockwell, was met with both public and critical acclaim. The novel made history as the first book originally written in any Indian language to win the prize. The book’s British publisher, Tilted Axis, ordered a 15,000 reprint the day after the announcement that it had won the International Booker Prize. Sales in the UK increased in volume by 877% compared to the week before the announcement. Before the win, Tomb of Sand did not have a US publisher, and had not been reviewed by any UK newspapers. It was subsequently praised as ‘a triumph of literature’ by the Financial Times and ‘a novel of enormous intelligence’ by The Daily Telegraph. The day after the announcement, US publisher HarperVia acquired the rights to the book.

And it wasn’t just the publishing industry that was celebrating. Amul, a butter brand and household name in India, shared a delightful ode to Shree and Rockwell on its Twitter channel to 345k followers, with its fans claiming Tomb of Sand’s Booker win a ‘matter of pride for India’.

Geetanjali Shree and Daisy Rockwell are set to appear at this year’s Edinburgh International Book Festival on Saturday 20 August (4.15-5.15pm) where they will be in conversation with Peggy Hughes.

‘As a child, I lived in books. Through the magic of fiction, I was a Russian princess, a gold digger, a little orphan from the suburbs of London, an alchemist from the Colombian mountains. This is what novelists teach us and what translators offer us: in literature there are no borders, no illegals, no outcasts. Fiction is my home and I am more than happy to be able to live there for several months, surrounded by friends and colleagues, to celebrate our passion for words and stories. It is a great honour and responsibility to present this prestigious award to a novelist and to his or her translator whose talents have enabled them to be read by English-speaking readers.’

‘Led by Leïla Slimani, the five judges of the International Booker Prize 2023 bring a wealth of talent and global experience as writers, critics, translators – and most of all as readers. At the end of the prize cycle, in May 2023, their reading and discussions will give them an unparalleled view of the new fiction from around the world, written in other languages that has been translated into English and published in UK and Ireland. Their recommendations should leap to the top of your must-read list.’

Leïla Slimani (Chair) is the bestselling author of Lullaby (published in America as The Perfect Nanny), one of The New York Times Book Review‘s 10 Best Books of 2018, for which she became the first Moroccan woman to win France’s most prestigious literary prize, the Prix Goncourt. Her first novel, Adèle, about a sex-addicted woman in Paris, won the Mamounia Prize for the best book by a Moroccan author written in French and inspired her non-fiction book Sex and Lies: True Stories of Women’s Intimate Lives in the Arab World. A journalist and frequent commentator on women’s and human rights, Slimani spearheaded a campaign – for which she won the Simone de Beauvoir Prize for Women’s Freedom – to help Moroccan women speak out against their country’s ‘unfair and obsolete laws.’ She is President Emmanuel Macron’s personal representative for the promotion of the French language and culture. Born in Rabat, Morocco, in 1981, she now lives in Lisbon with her French husband and their two young children. Her most recent novel is In The Country Of Others, the first instalment of a planned trilogy fictionalising the author’s family history.

Uilleam Blacker is Associate Professor of Comparative East European Literature at University College London. He is the author of Memory, the City and the Legacy of World War II in East Central Europe (Routledge). He has translated the work of many Ukrainian authors, including Oleg Sentsov’s short story collection Life Went On Anyway (Deep Vellum). His translations of novels by Taras Prokhasko and Maik Yohansen will be published in the Harvard Library of Ukrainian Literature series. His translations have appeared in many anthologies and journals, including The White Review, Modern Poetry in Translation, and Words Without Borders. He has written for The Atlantic, The Times Literary Supplement and The Literary Review, among others. In 2022, he was Paul Celan Translation Fellow at the Institute for Human Sciences in Vienna.

Tan Twan Eng was born in Penang, Malaysia, and grew up in Kuala Lumpur. He is of Straits Chinese descent and speaks English, Penang Hokkien, and Malay, as well as some Cantonese. He studied law at University of London and was an intellectual property lawyer in Kuala Lumpur before becoming a full-time author. His debut novel, The Gift of Rain, was longlisted for the Man Booker Prize in 2007. The Garden of Evening Mists, his second novel, was shortlisted for the Man Booker Prize in 2012. The Gift of Rain also won the Man Asian Literary Prize in 2012 and the Walter Scott Prize for Historical Fiction in 2013, as well as being shortlisted for the Dublin IMPAC Prize in 2014. The Garden of Evening Mists has been adapted into an award-winning film. His novels have been translated into more than 15 languages. His third novel, The House of Doors will be published in spring 2023. He has a first-dan ranking in aikido and divides his time between Kuala Lumpur, Malaysia, and Cape Town, South Africa.

Parul Sehgal was raised in India, Hungary, the Philippines and the United States. She is a staff writer at The New Yorker. Previously, she was a book critic at the New York Times, where she also worked as a senior editor and columnist. She has won awards from the New York Press Club and the National Book Critics Circle for her criticism. She teaches in the graduate creative writing programme at New York University.

Frederick Studemann is Literary Editor of the Financial Times. He joined the FT in 1996 as Berlin correspondent since when he has held a number of roles across the paper, including Assistant News Editor, UK Correspondent, European News Editor, Comment & Analysis Editor and Assistant Editor. He was a founding member of FT Deutschland where he ran the features and weekend section. The son of restless, itinerant parents, he spent his early years in Cork and Dublin, before moving to London, with later postings in Berlin, the Soviet Union, Greece and Austria.