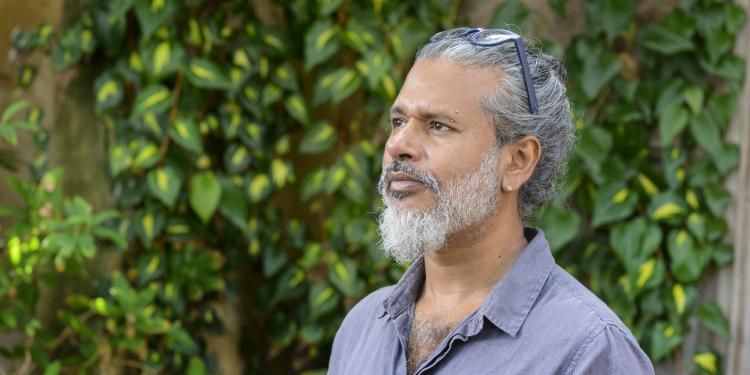 The author of The Seven Moons of Maali Almeida, winner of the Booker Prize 2022, explains why its plot, tone and black humour all owe a debt to the American writer

I’ve always been paranoid that folks will notice when I steal. And that irate writers will bang on my windows demanding that I return the loot. The eminent sportswriter Simon Barnes will politely ask that I give back borrowed bits from WG Karunasena’s Sport vs Life soliloquy at the end of my first novel. And the late William Goldman will berate me for a) Stealing his voice in every article I ever wrote and b) Using his bullet point technique when trying to make a point.

But the genius I have robbed from the most is, of course, Uncle Kurt. I came to Vonnegut later than I should’ve. Just like success came to Uncle Kurt later than he deserved. I devoured Slaughterhouse Five and Cat’s Cradle as a young man, and pretended to understand both. I was unaware that it was possible to mix sci-fi, jokes, war stories and philosophy and still have a terrific story. But I didn’t steal right away. I spent most of my youth trying to write like Ondaatje, Rushdie and Garcia Marquez, and failing quite obviously and inevitably. So it goes.

When I found the story that would become Chinaman: The Legend of Pradeep Mathew and searched for my old drunk sportswriter’s narrative voice, I turned to Uncle Kurt. WG needed a curmudgeonly tone that was wise, silly, funny and occasionally profound. Who else but Uncle Kurt? I savoured Hocus Pocus and Breakfast of Champions during that period and stole two other Vonnegut innovations: the short explanatory chapter and the non-sequitur illustration.

I peppered my first book with short snippets on cricket and Sri Lanka for the uninitiated reader and chartered the titular Pradeep Mathew’s career with zany diagrams from my brother. I hoped no one would notice. And guess what, no one did.

Chinaman acknowledged its debt with a quote from A Man Without a Country. ‘If I should ever die, god forbid, let this be my epitaph: the only proof he needed for the existence of god was music.’ The book was about, among other things, the transcendent power of human talent, and the quote proved an apt aphorism.

The Seven Moons of Maali Almeida used the famous refrain from Mother Night. ‘We are what we pretend to be, so we must be careful about what we pretend to be.’ And this worked well for the story of a closeted gay man and war photographer with shady alliances. For this book I didn’t need Vonnegut’s voice, as my protagonist was a droll thirty-something hipster, and already came with his own. But I did need Uncle Kurt’s gallows humour to make sense of the afterlife my characters were stuck in and the circumstances under which they perished. All the below Vonnegutian ideas can be found paraphrased in Seven Moons, some clumsily, some camouflaged. So it goes.

‘I was a victim of a series of accidents, as are we all.’ ― The Sirens of Titan

‘Just because you can read, write and do a little math, doesn’t mean that you’re entitled to conquer the universe.’ ― Hocus Pocus

The two books I re-read during the writing of Seven Moons were Galapagos and Bluebeard, two latter-day Vonnegut novels, less heralded than his 60s classics but, in my view, among his finest. In Galapagos, a disembodied million-year-old ghost recounts the last moments of humanity and laments at how our big brains were to blame. The underrated Bluebeard, a biography of an abstract expressionist painter, culminates in the reveal of a masterpiece hidden in a barn, his only photo-realistic work, depicting 5,219 Nazi concentration camp survivors, set free in a lush green valley at the end of the war.

These two unrelated ideas coagulated to form both the plot and the soul of Seven Moons, where a surprised ghost deconstructs his last moments on earth, while trying to reveal his own masterpiece, unseen photographs of Sri Lanka’s hidden atrocities. Though where I most heavily leaned on Uncle Kurt was tone.

‘Where do I get my ideas from? You might as well have asked that of Beethoven. He was goofing around in Germany like everybody else, and all of a sudden this stuff came gushing out of him. It was music. I was goofing around like everybody else in Indiana, and all of a sudden stuff came gushing out. It was disgust with civilization.’

The disgust Vonnegut felt for humanity and history’s barbarism resonated with the disillusion I felt for my beautiful island and the myopic fools who destroyed it. And his ability to view tragedy through the lens of the absurd, to blend genres and moods, and to be heart-breaking and hilarious within the space of a sentence, is the gold standard we all aspire to.

‘Laughter and tears are both responses to frustration and exhaustion. I myself prefer to laugh, since there is less cleaning up to do afterward.’

Uncle Kurt deftly juggles plot, philosophy and humour with drawings, math problems and thought experiments, and makes it look effortless, though the gaps between books and testimonials of his children reveal that it was anything but. When you take almost a decade to follow up your debut novel and endure many false starts and bad drafts, a quote like the one below from your idol gives comfort.

‘When I write, I feel like an armless, legless man with a crayon in his mouth.’

Seven Moons took close on seven years to complete and Kurt Vonnegut was a constant companion. I have read 12 of his 14 novels and in a decade will have read them all. And then I will ration him carefully and re-read him some more. Even my least favourite (Slapstick, Jailbird) have lessons to impart, in writing and in life.

‘And I urge you to please notice when you are happy, and exclaim or murmur or think at some point, ‘If this isn’t nice, I don’t know what is.’

I find myself using this phrase frequently. While biking through Sri Lanka’s paddy fields, watching my children play, sipping a well-mixed arrack sour, or nibbling on well-crafted prose. My next book is a workplace comedy featuring no one over 50, and is so far bereft of philosophising or Armageddon. But I began it as I do every book. By pinning a quote from Uncle Kurt on the wall I stare at. In this case, three.

‘There is no reason why good cannot triumph as often as evil. The triumph of anything is a matter of organization. If there are such things as angels, I hope that they are organized along the lines of the Mafia.’ ― The Sirens of Titan

‘Kilgore Trout once wrote a short story which was a dialogue between two pieces of yeast. They were discussing the possible purposes of life as they ate sugar and suffocated in their own excrement. Because of their limited intelligence, they never came close to guessing that they were making champagne.’ ― Breakfast of Champions

Winner of the Booker Prize 2022, Shehan Karunatilaka’s rip-roaring epic is a searing, mordantly funny satire set amid the murderous mayhem of a Sri Lanka beset by civil war. Read our extract from the book’s first section