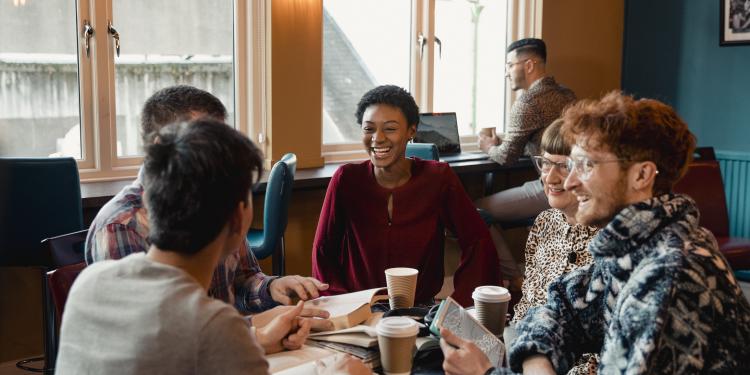 For the first time in its history, the Booker Prize opens up its winner ceremony and shortlist party to book clubs all over the UK

12 July, 2022: Today, the Booker Prize launches its very first competition to win seats at its annual winner ceremony, and invites book clubs to join the judges as they assess the books on the 2022 shortlist.

Book clubs from across the UK are invited to take part in the first Booker Prize Book Club Challenge, six of whom will be selected by this year’s judging panel, chaired by Neil MacGregor. Representatives from each of the six book clubs will be given an all-expenses-paid trip to the 2022 Booker Prize shortlist party at the Serpentine Gallery in London, where they will be present for the live announcement of the shortlist. Each book club will be given several copies of one of the shortlisted books to read and discuss, and will be asked to share their opinions on social media, as well as with the Booker Prize website.

The Booker Prize Book Club Challenge has been launched in partnership with The Reading Agency, which will coordinate the entries.

What the 2022 Booker Prize judges are looking for

In selecting the six book clubs, the 2022 Booker Prize judges – Neil MacGregor, Shahidha Bari, Helen Castor, M. John Harrison and Alain Mabanckou – will be looking for the most interesting, passionate and wide-ranging set of readers possible, as well as those willing to shout the loudest about this year’s Booker Prize shortlist on social media so that readers everywhere can follow the judging process and enjoy the books.

In the weeks leading up to the winner announcement, the judges will read and assess all of the six book groups’ social media activity relating to their assigned books. Two members of the group which, in the judges’ opinion, has provided the most original and engaging reviews will be invited to attend the 2022 Booker Prize ceremony and dinner at the Roundhouse in London on Monday, 17 October.

How to get involved

Applications are open to book clubs from across the UK, from all backgrounds. Anyone interested, please click here.

The deadline for applications is 12 August 2022.

‘In order to protect the nervous systems of the shortlisted authors, it’s essential that the Booker Prize judges’ deliberations remain confidential. But we’ve always wanted to find a way to share the liveliness and excitement of judging meetings with the general public.

‘Now, with the Booker Prize Book Club Challenge, impassioned readers across the country can feel some of that drama. Though they won’t be comparing one book against the others, they’ll each be reading one book closely – which is something the judges do too. By the time the judges decide on a winner, they will have read those six books three times.

So to have book clubs read alongside them will be as close to companionship as secret decision-making can get.’

‘The opportunity for reading groups to immerse themselves in the excitement of the Booker Prize and joy of reading the shortlisted titles, champions our values as a charity. We hope that groups across the UK will want to get involved and that maybe some new groups will form to enjoy this experience together.’

The judging panel will be looking for the best work of long-form fiction, selected from entries published in the UK and Ireland between 1 October 2021 and 30 September 2022.

The 2022 winner will be announced on Monday 17 October in an award ceremony held at The Roundhouse. The winner of the 2022 Booker Prize receives £50,000 and can expect international recognition.

The 2021 Booker Prize for Fiction was won by Damon Galgut with The Promise. The morning after the announcement, the book was number one on Amazon’s bestseller chart. Two weeks after the win, Chatto & Windus announced that it had reprinted 153,000 copies of The Promise, having sold 23,878 copies in hardback, 14,622 of which sold in the two weeks following the news, a 1,925% jump in volume compared with the two weeks before.

The leading prize for quality fiction in English

First awarded in 1969, the Booker Prize is recognised as the leading prize for literary fiction written in English. The list of former winners features many of the literary giants of the last five decades: from Iris Murdoch to Salman Rushdie, V.S. Naipaul to Hilary Mantel.

The rules of the prize were changed at the end of 2013 to embrace the English language ‘in all its vigour, its vitality, its versatility and its glory’, opening it up to writers beyond the UK and Commonwealth, providing they were writing novels in English and published in the UK.

The Booker Prize is supported by Crankstart, a charitable foundation.