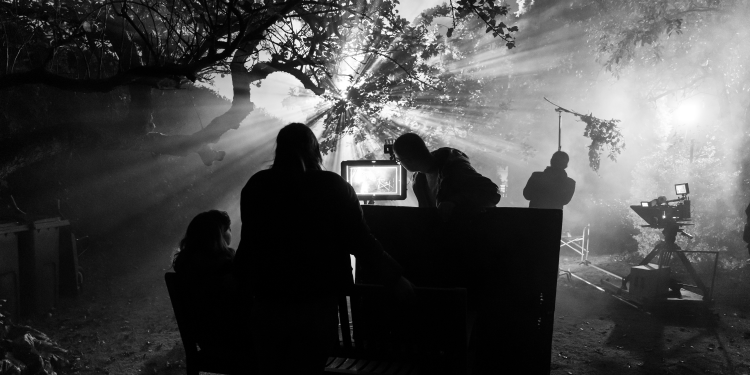 The Booker Prize has partnered with the BBC to produce six short films for the shortlisted books.

The films have been created by three gifted new directors, Yero Timi-Biu, Liam Young and Christine Ubochi, who are graduates of New Creatives, a scheme funded by Arts Council England and BBC Arts to highlight the best of emerging film and TV talent. The films have been produced by Rural Media. The actors in the films are David Jonsson (Industry, Deep State, Endeavour), Elmi Rashid Elmi (The Swimmers, Dune, Barbershop Chronicles), Fiona Button (The Split, Out of her Mind), Luke Norris (Poldark, Our World War, Been So Long), Paul G Raymond (Black Mirror, Buffering, Bridgerton, Kiri) and Ria Zmitrowicz (On the Edge, Three Girls and BAFTA Breakthrough Brits 2018).

‘No One is Talking About This’, directed by Liam Young, featuring Fiona Button and produced by Rural Media

Behind the scenes of the shortlist films

Yero Timi-Biu, Liam Young, and Christine Ubochi, who directed this year’s short films about the Booker Prize shortlist, spoke to LitHub about their creative process. The trio talk about how they came up with a one minute concept that captured the essences of the books they worked on, what they wanted viewers to think after watching, and more. Read the piece at LitHub.

Born in 1992, Yero is a British-Nigerian writer-director for TV and film, who has worked with the BBC, Channel 4, BFI, Sky, and Netflix. Yero is also a story editor for audio and worked on The Bias Diagnosis, an original Audible commission. Her award-winning short films Signs and Beneath the Surface have played at international festivals such as Encounters, Aesthetica and the BFI Future Film Festival, where she won a new talent award.  Her recent film, 0.5%, was commissioned by BBC Arts and will be released on iPlayer. Yero also recently directed the second unit of Alice Seabright’s upcoming BBC and Amazon TV show Chloe. With over a decade of experience, Yero’s first job was at the BBC during her A-Levels. Now she has original shows in development with various indies - including her first YA novel adaptation for the screen - and was one of Edinburgh TV Festival’s prestigious ‘Ones to Watch’ candidates for 2020.

Other than A Passage North and The Fortune Men, books Yero has recently enjoyed include Empress & Aniya by Candice Carty-Williams and Dear Senthuran by Akwaeke Emezi.

Born in 1998, Christine is a London-based creative, with keen interests in lifting up the voices of those from underrepresented groups in society, specifically Black women. After working with the BBC on her short film, The Skin I Move In – a simple portrayal of women existing beyond their relationships with men – and the audio drama En Justice, Christine worked as a Shadow Director on Alice Seabright’s BBC1 show, Chloe. She wrote her first screenplay in 2018 after feeling uninspired by her university degree and created a short film with friends. From then on, she has sought out opportunities to make her ideas a reality and hopes to continue sharing stories, whether that’s through her own productions or working with others. She currently has two scripts in development.

After working on the short filmed extracts from The Promise and Great Circle, she is alternating between re-reading them both, and trying not to be biased before the Booker winner is decided.

Born in 1995, Liam is an award-winning filmmaker from the West Midlands. He writes, directs and produces full-time for an agency in Birmingham. His most recent short, Pub Kid – a film about the awkwardness that a child feels when exploring a pub full of pie-eyed parents and lairy locals – appeared on BBC4 in early 2021 and has gone on to win multiple awards all over the world. He will be making another short next year and is currently looking into representation as a director to take the next step in his career.

Liam is very proud of his working-class Black Country background and always tries to include that in his films. When not writing or watching films, he can be found watching football, running a small clothing company or reading autobiographies (latest pick: Seth Rogen’s, Yearbook).

Liam directed Fiona Button (The Split, Out of her Mind) reading from No One Is Talking About This, and Luke Norris (Poldark, Our World War, Been So Long) reading from Bewilderment.

The making of, in pictures

David Jonsson reading from The Promise directed by Christine Ubochi

Liam Young directing Luke Norris on the set of Bewilderment

Luke Norris on set of Bewilderment directed by Liam Young

About the New Creatives

New Creatives was a national talent development scheme that encouraged artists aged 16-30 to push creative boundaries and reflect their experiences of living in Britain today in short form for film and audio. Funded by Arts Council England and BBC Arts, over two years, New Creatives has given 500 artists the chance to develop their technical and creative skills and the opportunity to have their New Creatives’ commissions broadcast on BBC platforms.

Rural Media is a Hereford-based production company and charity producing award-winning films, audio and immersive media. Founded over 25 years ago, Rural Media have a reputation, locally and nationally, for telling powerful stories from unheard voices and nurturing emerging creative talent from diverse backgrounds. In 2018 Rural Media was chosen to be the New Creatives production hub for the Midlands finding and supporting young creatives living or studying in the area.