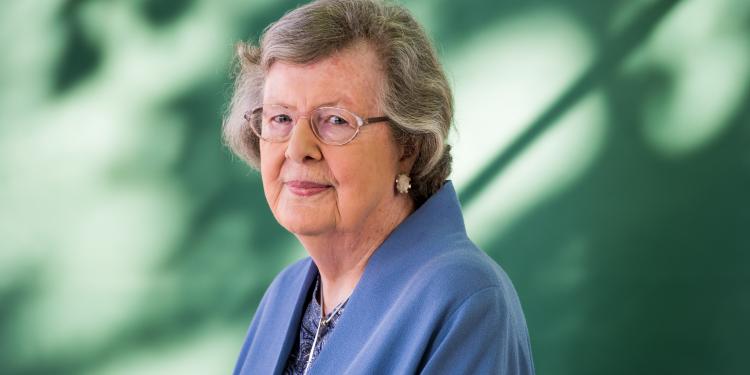 Ostensibly a novel about one woman’s extraordinary life, there’s nothing conventional about either Lively’s leading lady, Claudia Hampton, or the way in which the author tells her complex and intriguingly jagged-edged story

It can’t have come as a huge surprise when Penelope Lively won the Booker Prize in 1987 for her seventh novel, Moon Tiger, not least because she’d been shortlisted for the award twice already - for her debut novel for adults, The Road to Lichfield (1977) and According to Mark (1984). Blake Morrison, then literary editor of the Observer, described it as a ‘quietly popular’ win; as very much befits Lively’s own calm and dignified presence, both then and to this day. All the same, Penny Perrick, Morrison’s counterpart at the Sunday Times, wasn’t quite so convinced. ‘There is something too sheltered in Moon Tiger, for all its wide and fascinating range,’ she protested. ‘It may well be a novel for its time, tidy and appealing, qualities that this country seems to require of its literature now.’

Those words - ‘tidy and appealing’ - seem oddly ill-judged. On the contrary, Moon Tiger is a surprisingly complex and intriguingly jagged-edged, though never confused or confusing novel. Ostensibly the story of one woman’s life; there’s nothing at all conventional about either Lively’s leading lady, Claudia Hampton, or the way in which Lively tells her story. Instead, she slices and dices Claudia’s recollections - often shattering them then further by re-telling the same scene from multiple viewpoints - presenting them to the reader as an evocative succession of vignettes: scenes from a life. This fragmented structure was a notable departure from Lively’s previous style, and, looking back across her oeuvre today, still remains something of an anomaly. At the same time, though, the novel’s broader reflections on the processes of history and memory are very much preoccupations that had infused Lively’s fiction from the get-go - and would continue to interest her throughout the subsequent course of her career.

Time too has proved Perrick wrong on another point. In 2018, Moon Tiger was nominated for the Golden Man Booker. Celebrating 50 years of the prize, this award sought to celebrate the winning books that had best ‘stood the test of time, remaining relevant to readers today.’ From what was a decade of literary heavyweights - including Salman Rushdie (Midnight’s Children didn’t just win the prize in 1981, it went on to be crowned the Best of the Booker in 2008), Martin Amis, Peter Carey, William Golding and Kazuo Ishiguro - judge Lemn Sissay picked Moon Tiger as the frontrunner from the 1980s. In the end, the prize went to Michael Ondaatje’s The English Patient (1992), but Lively’s nomination did thrust her gem of a novel back into the limelight.

Not that either she or her work had disappeared into obscurity. On the contrary, she’s one of the most prolific recipients of the prize - to date she’s published 17 novels, four memoirs, six collections of short stories and an introduction to landscape history, not to mention reviews, essays, introductions, and a further 28 books for children. (On which point, she’s the only Booker winner who’s also been awarded the Carnegie Medal for outstanding children’s fiction - which she won in 1973 for The Ghost of Thomas Kempe.) And while some of her novels, although still charming, are very much the product of a particular moment - I’m thinking of the slyly satirical Next to Nature, Art (1982), which is very much a book of the 1970s, cleverly lampooning the era’s obsession with the buzzword ‘creativity’; or City of the Mind (1991), which captures a certain aspect of late 1980s London life that revolved around the regeneration of the Docklands area - one of the great achievements of Moon Tiger is its perennial appeal; perhaps because even at the time it was published, it evoked a past that was already regarded as historic.

‘Was she someone?’ one of the nurses looking after the 70-something, dying Claudia asks in Moon Tiger. ‘I mean, the things she comes out with…’ Indeed Claudia was! In brief: a once intrepid war reporter-turned-post-war popular historian. Think of the American journalist Virginia Cowles (who gets a mention here, in fact - albeit unnamed - as the ‘lass’ who got Randolph Churchill into trouble for giving her unprecedented access to the action), who famously turned up to report on the Spanish Civil War wearing high heels and a fur coat. So too, Claudia’s feminine glamour takes people by surprise, and ensures she’s taken notice of: ‘the legs, the hair, the outfit which is not the get-up of the average woman press correspondent’.

Those days are long behind her now, though; all she has left are the ‘myriad Claudias’ from her past, who dance through her mind as she drifts in and out of a morphine-induced haze. There’s the ten-year-old child, fossil hunting with her beloved brother, Gordon - her lifelong confidant and competitor - on Charmouth Beach in 1920; the precocious schoolgirl who refuses to learn by rote and makes a nuisance of herself in class; the young woman announcing her unplanned pregnancy to her boyfriend while they wander around the Ashmolean Museum; the neglectful mother who leaves her daughter to be raised by her grandparents, abdicating responsibility so she can pursue her all-important career; and the fearless war correspondent, lying in a bed in Luxor with her great love, shortly before he’s killed in action.

When interviewing Lively for the Paris Review in 2018, at which point she was in her mid 80s, I asked her what she remembered about writing Moon Tiger. It was so long ago, she told me, it now felt as if it had been written by somebody else entirely. ‘It was somebody else who wrote it, myself in an earlier form,’ she insisted, confirming her protagonist’s conception of the self. So, too, it’s precisely the ‘composite’ element of history that intrigues Claudia - what she describes as ‘all the voices that have managed to get themselves heard. Some louder than others, naturally.

‘I’ve always thought a kaleidoscopic view might be an interesting heresy,’ she thinks, mischievously, ever the rebel, even on her deathbed.

Lively’s own decision to read history at university had, she told me, a very real and lasting impact on her work. Not because she was a particularly assiduous student - she claims she wasn’t - but because it ‘absolutely conditioned’ the way in which she subsequently wrote her novels. Memory, chance and consequence; these are leitmotifs that reappear again and again in her fiction, and they’re of equal importance when she thinks about the trajectory her own life has taken. In Making It Up (2005), she looks back on certain moments in her personal history and explores what might have happened if events had turned out differently; if she’d made a different choice, or if happenstance had conspired to send her down a different route.

Although it was published relatively early in her career, in many ways Moon Tiger feels like the apotheosis of these preoccupations. Not only does it interrogate the construction of historical narratives, both individual and collective, there’s an incredibly moving ‘what if…’ nestled at the novel’s centre. Snatching a few days together in Luxor amidst the chaos and confusion of the war, Claudia and Tom Southern - the young soldier she has met and fallen in love with - are greedy for the stories of each other’s lives. ‘And oh God,’ thinks Claudia to herself, ‘may it have a happy ending. Please may it have a happy ending.’ It doesn’t, of course. Tom is killed not long after, and with him, the life that would have been theirs to share.

Although not the focus of Claudia’s magnificent existence - as Morrison sardonically pointed out, to claim that Moon Tiger ‘is no more than a love story with a wartime setting is to invite the response: so was War and Peace’ - it is the kernel of experience around which Lively weaves Claudia’s story. It illuminates a side of her character that otherwise remains elusive. Claudia in love is a softer, less abrasive woman; her relationship with Tom contains none of the combative rivalry that’s so integral in her dealings with the other men in her life. But it also affords Lively the opportunity to return to a world that she’d witnessed first-hand, albeit through the eyes of a child. (Lively was born in Cairo in 1931—her father worked for the National Bank of Egypt - and lived in the city until she was sent to school in England in 1945.)

And truly, the most sensual and vivid descriptions in Moon Tiger are those pertaining to Egypt. From the image of ‘the long low fawn shoulder of the hill above the Valley of the Kings with the sun going down behind it in a smoulder of gold and pink and turquoise,’ to the ‘evening sounds of ice chinking in glasses, the slap of the suffragis’ slippers on the stone of the hotel terrace, the buzz of voices, laughter’. The feeling of the ‘hot insect-rasping darkness’ of the night, when one’s only companion is the ‘glowing red eye’ of the Moon Tiger (‘a green coil that slowly burns all night, repelling mosquitos, dropping away into lengths of grey ash’). Lively elegantly conjures up a now lost world that was clearly once intimately known.

In one of her rare moments of lucidity, the now dying Claudia tells one of her nurses that she’s plotting what will be her greatest work: ‘a history of the world […] And in the process, my own. The Life and Times of Claudia H. The bit of the twentieth-century to which I’ve been shackled, willy-nilly, like it or not.’

This is what Lively achieves with Moon Tiger: it’s the story of a century, as seen through the prism of one extraordinary woman’s life. There’s a lot to admire in this novel, but re-reading it today, first and foremost I’m taken with how very modern a heroine Claudia is. Her refusal to compromise, her boldness and unapologetic ambition, her ambivalence towards motherhood, the selfishness that allows her to put her own needs before those of her child, her bolshiness. Put bluntly: her so-called ‘unlikability’. Moon Tiger hasn’t simply stood the test of time; in some ways it’s a novel that might even speak to readers more strongly today than it first did thirty-five years ago.

By
Penelope Lively
Published by
Deutsch

Penelope Lively’s timeless, Booker Prize-winning novel explores the shifting nature of reality and identity through the many lives of its narrator.