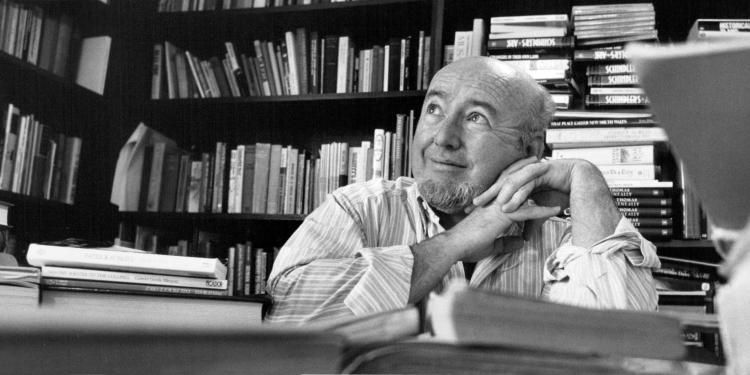 'I knew where the good stuff was': Thomas Keneally on how he researched and wrote Schindler's Ark

In writing the semi-fictional Schindler’s Ark, winner of the 1982 Booker Prize, Thomas Keneally found himself in the unique position of both author and archivist, as he explains in this exclusive video interview

‘Oh look,’ Thomas Keneally beams down the camera lens of his laptop. ‘It’s all my favourite people.’

We are on a Zoom call: myself, part of the Booker Prize’s digital team, and the Keneallys – Tom, his wife Judy, and his grandson, Rory. We’ve gathered to discuss the archive and making of Keneally’s 1982 Booker Prize-winning novel, Schindler’s Ark.

Because of the distance between us – he is in Sydney, I am in London – everything leading up to this moment at 10am on Wednesday May 11th has been done at arm’s length via the internet. But, I have come to learn, it is characteristic of Keneally to embrace the chance to tell a story with familial warmth, even via the grainy medium of a video chat.

My first contact with him happened almost a year ago. Waking up to emails from Booker authors is an unfailingly surreal process: never more so than when they are as spritely and charismatic as Keneally.

An early email: ’So I am a Zoom literate geriatric (sez ‘e) so why don’t we go for your proposed hook-up? There are secondary items [we could discuss]. For example, I think my interest in the Reich began with my father’s years in North Africa, campaigning against the Napoleonic ambition of Rommel to meet up with his Japanese allies in northwest India.

‘Mind you, having grown up in the bush he was a wild boy and from his elevated rank as sergeant, he campaigned also against General Wavell’s ruling that other ranks should not drink spirits by taking over Arab bars (“Mahomet, you take a rest, son, and we’ll take over the bar. And you won’t be out a piastre, mate, because I’ll make these mongrels pay for what we drink, guaranteed, cobber!”)

‘I still have a few of the Nazi memorabilia he sent me in Australian Comforts Fund cake tins! I was one degree of separation from that Byzantine regime. In any case, let’s talk further.’

Needless to say, we did. I found myself in a rather unique position. Most authors, when asked about their archives, tend to think of the material they gathered in the lead-up to writing as a by-product. I’ve grown used to hearing from writers that their novel should be considered the final artefact, and that any papers which surround it are incidental. Not so with Keneally.

Over the course of the summer last year I received a steady stream of photos and documents, each accompanied with a set of very specific notes reminiscing on their provenance, and their relation to Schindler’s Ark.

Writing a Holocaust novel predicated on the lives of people he had not only researched, but met, put Keneally in the unique position of playing archivist in order to be able to work as an author — of consciously consolidating taxonomies, of travelling Europe and recording interviews with survivors, and of wrangling with the question of how to translate the very real pain of the people he’d met into a semi-fictional narrative.

‘I had begun research in December 1980,’ he told me via email. ‘I had printed material (e.g. Mietek Pemper’s copies of Koncentrationslager correspondence, and photographs), but I had already interviewed the survivors using tapes. All tapes would be transcribed back in Sydney.

‘I spread the documents according to period around my desk at Bilgola Beach and on a pool table in the midst of the office. I used reference files, many of which bulged. I wrote in long hand when working on the novel which began about May, 1981 and was finished in a year. I was aware all this was an archive for a novel – that was a self-conscious decision. The pool table was essential to my very eccentric system of cataloguing.’

In addition to the transcripts of his many interviews, Keneally accumulated extensive documents, including from Leopold ‘Poldek’ Pfefferberg, who had worked at Oskar Schindler’s factory outside Kraków and whom Keneally had met at his luggage shop in Beverly Hills, and from Itzhak Stern, a Jewish accountant who was instrumental in the rescue of the Schindlerjuden. ‘Well, I somehow fitted it all in and knew where the good stuff was,’ Keneally told me.

There is no question of the historic and emotional legacy of Schindler’s Ark, known better to some as Schindler’s List, per Steven Spielberg’s 1993 film adaptation. What I hope is highlighted here is the formal brilliance of the novel’s genesis: a fact its author remains good-naturedly dismissive of.

‘No, it’s nothing,’ he told me in the summer of 2021 over Zoom. ‘You have to read my latest [The Dickens Boy]. I like to think it’s not bad for an old fart like me. It shows I’ve still got good work left in me.’

As though the idea was ever in doubt. In the run up to filming our interview, I vie for his attention alongside his appearance at the Adelaide Writers’ Week and the Australian federal election, which saw Anthony Albanese’s Labor Party win power – a matter on which his philosophies pair well with Schindler’s Ark.

In our last few emails, he apologies for his short delay in writing, telling me, ‘We have a new government! Albanese a working class Rugby League follower like me. Had promised formal constitutional recognition of Aboriginal sovereignty never ceded! Our problem being that we honkies, even convict descendants, can’t have legitimacy on the face of this continent if the ancient (at least 80,000 year) occupiers don’t. It’s all like a happy dream!’

I resist the urge to tell him that our correspondence over the past year has been much the same.

Thomas Keneally's personal photo archive, in his own words

On the set of Schindler’s List, 1993: ‘A picture of myself and an obscure Jewish dyslexic boy named Steven Spiel something or other’

‘Spielberg signs a book at the Washington premiere’

‘Leopold Pfefferberg, the man who introduced me to the story in 1980, as Polish lieutenant on the eve of German invasion. Supplied by Leopold’

‘Oskar in full song at a Krakow party. Photo supplied by Schindler/Pfefferberg’

‘Oskar and a Wehrmacht man, believed to be Plathe, who collaborated with him’

‘Oskar with horse in the yard at his factory/camp. This picture supplied by Leopold Pfefferberg for the book came ultimately from Oskar himself’

‘Goeth [commandant of the Plaszow concentration camp] on horseback inside Plaszow. Image supplied by Titsch/Pfefferberg’

‘Amon Goeth [commandant of the Plaszow concentration camp near Krakow] on the balcony of his “villa”. Supplied by Leopold, but the brave work of an Austrian manager of the Madritsch factory inside Plaszow, the late Raimund Titsch. Leopold Pfefferberg sought out Titsch in the 1960s and bought a number of them from him’

‘Poldek and self with Lutek Feigeinbaum and his wife. Lutek famously had prescription glasses resourced to him by Emilie Schindler and was astounded by it’

Thomas Keneally’s remarkable, Booker-winning historical fiction about the unlikely hero who rescued thousands of Jews from the Nazi death machine.

The Reading Agency and BBC Arts have teamed up for the Big Jubilee Read, and we’re celebrating the books and authors on the list who are part of the Booker family.

The two-time Booker Prize winner sat down with us on being longlisted for The Mirror & the Light.

Yann Martel on writing Life of Pi: 'You want a sense that it was written in one breath'

In an exclusive interview, the 2002 Booker Prize winner talks about the unique planning process behind his best-known novel — and making the fantastic feel believable